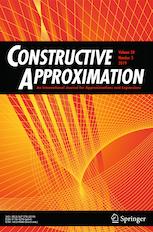 In its 35 year history, “CA” has grown from a single, 400-page issue a year to six issues and more than 1,000 pages per year. Its editorial board has grown from 13 inaugural editors to a robust slate of 33 international researchers who are recognized leaders in the subjects covered by CA. The journal has a 5-year impact factor of 1.299.

Since its inception, Constructive Approximation has been published by Springer Nature in New York. It has also benefited from the support of the Department of Mathematics at Vanderbilt University, which has housed its editorial office since 2001.

Eight Special Issues have accented the journal’s history, edited by experts in the special subject and featuring invited submissions. The first was “Multivariate Splines,” in 1987, edited by Klaus Höllig. More recently,  the Special Issue on Painlevé Equations, published in two parts in 2014 and 2015, was edited by Percy A. Deift and Alexander Its; and the Special Issue on Approximation and Statistical Physics, published in two parts in 2018, was edited by Peter J. Forrester, Douglas P. Hardin, and Sylvia Serfaty.

The next Special Issue, currently in development, is on “Deep Networks in Approximation Theory” and is being edited by Ronald DeVore, David Donoho, and Philipp Grohs.

Recently, CA has begun publishing survey articles on topics of particular interest to the approximation and analysis community. The first of these, “Quadrature Points via Heat Kernel Repulsion” is currently available in the “Online First” area of the Constructive Approximation website.