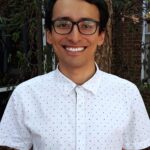 Daniel Romero Suárez is the 2020-2021 Joe and Mary Harper Graduate Student Fellow from the Department of Spanish and Portuguese. His doctoral research seeks to demonstrate that contemporary poetry of sickness in Latin America resorts to communal imagery that includes a long and painful history of loss, political violence, and socioeconomic precariousness, in order to challenge biomedical, linear narratives that exalt individual wellness.

What is your research about, and why does it matter?

My doctoral research argues that our conventional ideas regarding health are not enough to understand Latin American representations of sick bodies, medical treatment, and death. Although Medical Humanities and Medical Anthropology offer invaluable approaches to health and sickness, they still rely on linear, academic writing.

These three characteristics will offer new visions on diseases when the patients cannot resort to the Western biomedical myth of health and progress.

Conversely, contemporary Latin American poetry – my primary object of study – is used to depict decay, chaos, and fragmentation. These three characteristics will offer new visions on diseases when the patients cannot resort to the Western biomedical myth of health and progress.

I’ve been really excited by discovering how close Peruvian and Chilean poetics are. Peru and Chile share a problematic history that includes a nineteenth-century war that started a prolonged animosity between the two countries. However, their late-twentieth-century poetry shows that they shared similar experiences and responses to political violence, social distrust, and the imposition of neoliberal policies.

What was your first job, and what lessons did you learn from it?

My first job was as a book salesman at Lima International Book Fair. At the time, I was an undergraduate student majoring in Literature, and my academic interest led me to apply for the position. During the two-week event, I realized how futile academic knowledge can be. I had accumulated a decent amount of literary theory readings, and I had read several of the books I was supposed to sell.

However, I struggled to make sales because I couldn’t communicate effectively without the jargon I learned in the academic bubble. My sincere aspiration to help promote literacy was frustrated by my educational background: I didn’t know how to engage with laypeople’s interests.

I also realized that the event’s dynamics were distant from the official discourse that described the book fair as the “most important cultural event in Peru” in which all the sectors related to books (instructors, publishers, librarians, etc.) came together harmonically. Academia is usually indifferent to all the precarity that allows their intellectual or infrastructural growth.

Back then, I saw Professors presenting books while underpaid employees forced to work overtime prepared the room. Now, I can see the pomp that generally accompanies conferences that do not generate a positive impact in the communities of the host cities.

Daniel Romero Suárez is a Ph.D. candidate in Spanish at Vanderbilt University in Nashville, TN. He holds an M.A. in Spanish from Vanderbilt University (2018) and a B.A. in Hispanic Literature and Linguistics from the Pontifical Catholic University of Peru (2015).  In addition to his academic interest, Daniel is currently serving as a Curb Public Scholar (2019-2021) with a project titled “Creating Writing Workshops in Pandemic Times.” The workshop members read and analyze literary writings before writing their own texts about health, sickness, and the on-going pandemic. The workshop is lead in Spanish to address the lack of spaces in Nashville where Spanish is considered an artistic language that preserves the collective memory of the city. You can follow the project on Instagram (@poesianashville) and Facebook (@poesiaennashville)