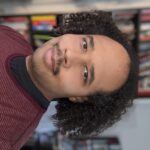 My first academic job was a summer internship at Lawrence Livermore National Laboratory, working in the Global (Climate) Change Research division in the 1990s. The climate models being developed down the hall were low resolution and required room-size computers to run. But the temperature data I helped analyze was unequivocal: there was a clear warming trend driven by the atmosphere.

At the time, the oil industry was publicly denying that the Earth was even getting hotter. Yet the Exxon scientists who visited our lab had no doubt that humans were responsible for climate change.

At the time, the oil industry was publicly denying that the Earth was even getting hotter. Yet the Exxon scientists who visited our lab had no doubt that humans were responsible for climate change. So, I learned to always seek out data when a public conversation involves duplicity.

What initially sparked your interest in your research?

From 1998 to 2001, I worked as a human rights advocate for indigenous communities who said “no” to oil on their lands. Peoples like the U’wa of the cloud forests of northeast Colombia and the Ijaw and Ogoni of the Niger Delta organized mass resistance despite the militarization of their lands. Our job was to bring their campaigns into the American governmental and corporate offices that held so much influence over their futures.

Inspired by the kinds of collective actions they undertook, I became an ethnographer of protest and traveled to Bolivia (for fourteen months from 2008 to 2011) to understand how indigenous and urban movements collaborated to revolutionize that country’s politics.

What does the phrase “Environments” mean to you?

My research project on socio-environmental conflicts is really about understanding what environments mean to the various actors who are struggling over lands slated for extractive projects. I am studying the ways the indigenous and Afro-descendant communities, environmentalists, state actors, and resource-extracting corporations perceive territory in practical, ethical, and spiritual terms.

These conflicts arise from local objections to mining, oil, and gas extraction, large  dams, and new infrastructure projects, and the threats these pose to clean and reliable water supplies, air quality, and human health. But they also occur at a time when many Indigenous and Afro-descendant communities have articulated new visions for autonomy and revitalization of their territory.

I’m working to explain these visions to readers in rich, settler countries like the US and to help us critically understand the worldviews that are driving extraction and climate change, so that we can change them.

Carwil Bjork-James is Assistant Professor of Anthropology and the author of The Sovereign Street: Making Revolution in Urban Bolivia. He conducts immersive and historical research on disruptive protest, environmental struggles, state violence, and indigenous collective rights in Bolivia. His research project, Perspectives on Space and Territory in Socio-Environmental Conflicts, looks at the political, ethical, and legal tensions that surround resource extraction projects pursued by “post-neoliberal” governments in South America. Building on his past work in this area as both a researcher and a policy advocate, this project focuses on indigenous opposition to environmentally damaging projects on their traditional territories.