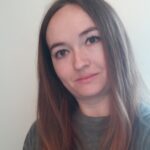 Hannah Katherine Hicks is the 2021-2022 American Studies Fellow from the Department of History. Her research focuses on legal history, gender, and race in the nineteenth-century American South.

My research focuses on women’s experiences as defendants and complainants in South Carolina’s criminal courts between the end of the Civil War and 1900. I work primarily with archival court records from the county level as well as newspapers, governor’s papers, and other documents. I really try to focus on local stories and the trials of ordinary Black and White women to present a sense of the social and political world in which the criminal courts operated, with particular attention to the intersections of race, gender, and class in the legal system and in women’s experiences.

I argue that local sources and bringing women into our ideas of what the post-Civil War legal system in the American South looked like complicates the preexisting picture of a hopelessly oppressive criminal court system where Black people and women could only appear as passive defendants. Even after the fall of Reconstruction, racist statutes and the use of the courts as weapons of White supremacy never went uncontested by African Americans and their White political allies, or by ordinary women who sought to use the law to protect themselves and their families.

Reading local court records enables us to hear women’s voices more clearly. This not only complicates our stories about race, gender, and criminal law in the post-Civil War South, but helps us see women in the nineteenth-century Southern criminal justice system not as passive subjects of a hegemonic legal system, but as resourceful and resilient actors.

The case files of women on trial, too, demonstrate that despite their disadvantages, these defendants marshaled their resources, social networks, legal knowledge, and understanding of their society to defend themselves using both legal and extralegal strategies. Reading local court records enables us to hear women’s voices more clearly. This not only complicates our stories about race, gender, and criminal law in the post-Civil War South, but helps us see women in the nineteenth-century Southern criminal justice system not as passive subjects of a hegemonic legal system, but as resourceful and resilient actors.

So many moments come to mind! I love reading defendant’s statements, which are not always available when reading nineteenth-century criminal court records. When they are available, these statements shed so much light on women’s actions, how they viewed themselves, their society, and the courts, and how they marshalled what resources they had to defend themselves. I love finding letters between defendants and complainants in case files. Once, I found a bullet that was used as evidence in a murder trial!

A particularly fascinating moment for me came early in the project, when I was reading newspaper articles about the contested 1876-77 election in South Carolina. This disputed and violent election concluded with Governor Wade Hampton’s appointment and marked what historians generally see as the official end of Reconstruction in South Carolina and the South as a whole.

But one of Hampton’s first contested actions came when he and Daniel Chamberlain were both claiming to be the rightfully elected governors: Hampton issued a gubernatorial pardon for Tilda Norris, a Black woman imprisoned in the state penitentiary for manslaughter. The prison superintendent initially refused, then relented when the State Supreme Court found Hampton to have that authority as the elected governor. Tilda Norris got her freedom, but Wade Hampton took office as a self-declared “Redeemer” of White supremacy in what would come to be known as the Jim Crow era.

Reading about these events in the newspapers made me want to discover more about Tilda Norris and often forgotten women like her, who both had their own stories and played pivotal and sometimes surprising roles in the politics of the time.

I worked as a cashier and stocker at a rural grocery store in my home state of North Carolina.

I learned a lot about interacting and finding common ground with very different types of people. I also learned about the exploitative nature of minimum wage service jobs and, since I worked there all throughout my undergraduate years as well, I really grew to value my education and the opportunities I had as a student.

Hannah Katherine Hicks is a sixth-year PhD. candidate in US History and the 2021-2022 American Studies Fellow at the Robert Penn Warren Center. Her research focuses on legal history, gender, and race in the nineteenth-century American South. Her dissertation, “Troubling Justice: Women on Trial in the American South,” examines Black and White women’s appearances in local criminal courts after the Civil War. Before coming to Vanderbilt, she studied history and English at the University of North Carolina—Charlotte.