White Supremacy at the Border: Haitians, History, and A Fight for Dignity 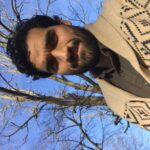 Jesús G. Ruiz is a National Academy of Sciences Ford Foundation Postdoctoral Fellow in Caribbean History in the Department of History at Vanderbilt. He is one of several speakers scheduled for this Friday’s Circum-Atlantic Studies Seminar conference, “Other African Diasporas,” to be held at Vanderbilt’s Digital Commons from 3-6 p.m. Click here for a complete list of speakers.

On September 19, 2021, at Del Rio, Texas, U.S. Customs and Border Patrol (CBP) officers used their horse reins as whips on Haitian migrants seeking asylum in the United States. The agents, in order to prevent Haitian asylum-seekers from crossing back into the United States after retrieving food in Mexico, whipped their reins as a lash. By definition, they effectively used their horse reins as a whip to whip Haitians into fear and impede their crossing into U.S. territory.

To justify the mass deportations of Haitians seeking asylum, the Biden administration is using a Trump-era public health order. But the so-called “Title 42” has since been blocked by a U.S. District Court Judge who has ruled that the order does not give the U.S. Government the authority to expel migrants nor to deny them the opportunity to seek asylum. Thus the current administration, in line with the U.S. Government’s historically discriminatory practices against Haitian refugees, is in violation of both domestic and international law.

A History of Refuge and Sanctuary

The images of white men on horseback whipping Black men, women, and children no doubt evoke scenes of the violence of plantation slavery not only in the U.S., but also across the Caribbean and the broader Americas, where such slave patrols and racial violence were commonplace. But the act of providing refuge—and ultimately citizenship—to those from other lands, is part of a story that is as Haitian as racism is to U.S. immigration policies.

Article 44 of the Haitian constitution of 1816 explicitly stated that all “Africans and Indians, and the descendants of their blood, born in the colonies or in foreign countries, who come to reside in the Republic will be recognized as Haitians, but will enjoy the right of citizenship only after one year of residence.”1

Haiti’s nineteenth century laws, therefore, granted citizenship to anyone stepping foot on Haitian soil, after one year of residency. Insofar as the timing-to-citizenship is concerned, Haiti’s nineteenth century laws are actually more progressive than how asylum in the U.S. works. If you are granted asylum in the U.S., after one year you may apply for your permanent resident status—aka “green-card”—and thereafter one has to wait four years to apply for citizenship.

Haiti’s historic roles and interventions in the global antislavery movement are directly linked to its rich emancipatory history. The latter is rooted in shared experiences on the island of Hispaniola, where older notions of rights and liberties drew African diasporic communities to its shores.2

Thus in light of the recent events at Del Rio, and of the ongoing racism and xenophobia against Haitian migrants all across the hemisphere, we should take note that Haiti once opened its borders to those in need. Perhaps it is time the U.S. Government do the same. Haitians deserve dignity, certainly not whips and mass deportations.

2 At the upcoming Circum-Atlantic Studies Seminar “Other African Diasporas” on October 1, 2021, I will present the 1763 legal cases of two French-speaking formerly enslaved fugitives who sought religious sanctuary (asylum) on the island of Hispaniola.

Dr. Jesús G. Ruiz is currently a National Academy of Sciences Ford Foundation Postdoctoral Fellow in Caribbean History in the Department of History at Vanderbilt. Dr. Ruiz earned his Doctorate with distinction in Latin American Studies from Tulane University. More recently, he was an ACLS Emerging Voices Postdoctoral Fellow at the Franklin Humanities Institute at Duke University. His research focuses on the histories of the Black Atlantic, Afro-Latin America, and Haiti, specifically the revolutionary period.