I was in the middle of journaling in my little red notebook when Caryl Churchill’s Top Girls began. Without ceremony, without fanfare, and without an introduction, the curtain simply went up — onstage was a long, long table, right in front of a long, long painting. This would be the set for a long, long, long, long scene. Sitting in the audience of mainly Britons at the National Theatre, there were multiple rounds of recognition laughter as the characters assumed the stage. Clearly, these famous women were particularly famous to this hearty British audience — tragically, though, they were not at all that famous for the one from Vanderbilt. A cocktail of confusion on our part and less-than-stimulating staging on their part left me and my roommate on the verge of sleep; and when we both came to at the end of the first scene, we were sure that the play was over. It felt like an hour and a half had easily passed us by.

But the play was only just beginning.

And indeed, the theatre of the play only started after the first scene had ended. Some striking moments from the second scene included a young girl sticking her finger in her vagina and holding it up to another young girl, the second one licking that same bloody finger. In addition to this was a raised brick — just a plain, old brick — and the power it held over an audience sweating over whether this plain, old brick was about to be used to murder the mother of the young girl (why don’t we call her “Angie”). Resulting from the intensity of this scene (made only more vivid by the compact space in which it unfolded), I was hooked for the rest of the show. I also immediately made the decision that, while the first scene might work as a brief prologue or a truncated preshow, the play must cut the first scene if it wishes to pull in (let alone to keep) any young audience.

The third scene, wherein we meet the so-called “Top Girls,” was brightly lit and refulgent of a hopeful future. The Second Wave of feminism could be heard rushing in at full force, and the dialogue was fascinating, if heavy-handed. We were afforded the opportunity to see many different women with distinctly different worldviews, and each more or less seemed to believe in their respective worldview (for which I commend Churchill deeply). Unfortunately, it felt as though we were never given enough time with each character to do anything with the scintillating characterizations, fostering a lot of disappointment in at least this viewer. However, this cannot be said for Howard’s wife, who comes in for the latter part of the scene and implicitly demands that Marlene give up her job to her husband because… well, because. This segment felt as real as it could in 2019, and I could not help but wonder how over-the-top and tongue-in-cheek it might have been played at Vanderbilt (which, evidently, it was, six years ago. Dr. Essin says of it: “People were confused.”).

At intermission, everyone sitting next to me thought the play was over and began to leave. They were not happy to discover it was not. But troopers as we are, we sat through the second act — a lot less lionous of a task, given the weirdly disparate lengths of the determined acts. This act featured some extraordinary acting from Marlene and sister Joyce; never have I truly believed actors more than in this scene, I’d imagine. Much like the first scene, this act could stand as its own play, and perhaps it ought to. Here, the themes of Thatcherite politics and the costs of ambition to feminism are really given room to flourish. Here, as elsewhere, one wonders whether the play would read better and more interestingly than it looks. My inclination is yes, especially in light of the final Heart of Darkness-esque “Frightening… Frightening!” (thanks to my classmate for the comparison) appearing as utterly ridiculous to my peers. At curtain, there was rightly no standing ovation, and I announced my rating of 5 out of 10.
In our post-viewing discussion, someone reflected, “I think it’s a play I really enjoy thinking about afterwards, but not one I enjoyed so much while watching.” To that, then, I say: you watched a bad play. If you make theatre only to make people think, you ought to be a columnist or a philosopher instead. There is no need for a stage if that is your sole goal — in fact, the false promise of the theatrical frame just leaves audience members interested in theatre underwhelmed and resentful. I understand that the political gravitas of this play necessitated a lot of extra words and ham-fisted sociopolitical dialogue. But this was supposed to be a play, not a treatise. It is for this reason (and the fact that such a work can never recover from a scene which drags and drowns as much as its first) that this show cannot score above a 5 for me. However, the phenomenal performances of the actresses playing Marlene and Joyce and the stunning moments of theatricality which landmarked the show suffice to supply the 5 points which it for me has earned. 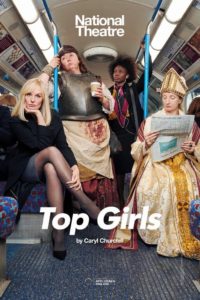 Our first production will be Top Girls by Caryl Churchill at the National Theatre.

Caryl Churchill got her start during the British Fringe movement, new experimental theatres and productions that grew in the late 60’s and 70’s with the end of government censorship. Her work also connects with the 2nd wave feminist movement in Britain, emphasizing women working in collaboration, producing theatre without established, patriarchal hierarchical structures.  She is known for her work at the Royal Court (where we’ll be seeing salt. on May 25), Joint Stock Company, and Monstrous Regiment (feminist collective). 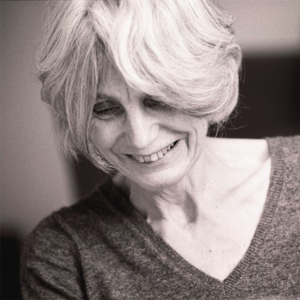 Influenced by German playwright and theorist Bertolt Brecht, Churchill asks the audience question their assumptions about gender, feminists, and feminism by contrasting the fantastic with the ordinary.  The play begins with a feminist fantasy; Marlene celebrates her promotion to a top executive in an employment agency with select “top girls” whom she venerates from fiction and the historical past.  Through each character, Churchill contemplates women’s past and continuing struggles to live their life to the fullest and have the same choices as men.  But as the celebration progresses, the party begins to unravel.  While thes

e women have achieved great things as individuals, have they really changed the world around them and laid a path for other women to follow?”