Excerpt: Food, Texts, and Cultures in Latin America and Spain 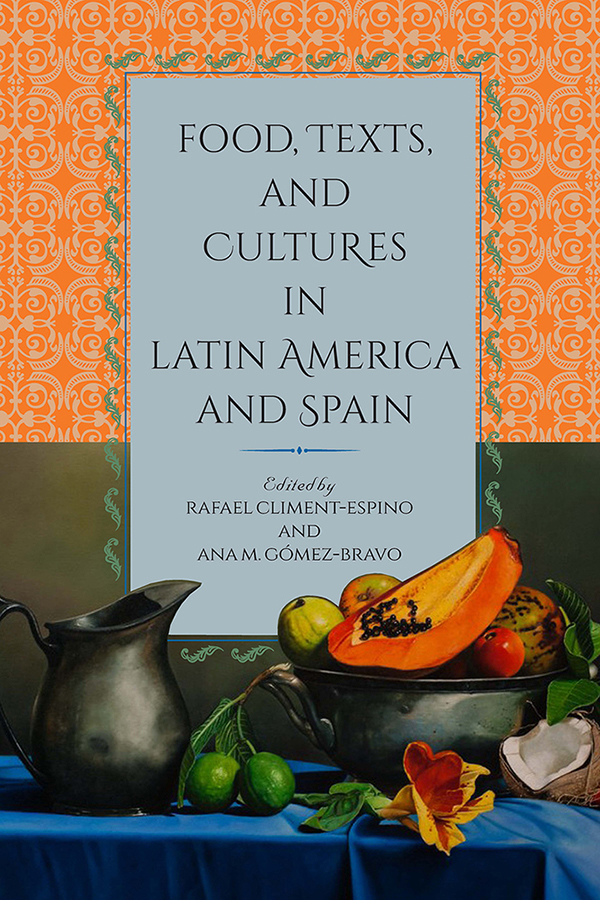 Food, Texts, and Cultures in Latin America and Spain is officially out this week from Vanderbilt UP. Edited by Rafael Climent-Espino and Ana M. Gómez-Bravo, the book comprises 14 essays that showcase the eye-opening potential of a food lens within colonial studies, ethnic and racial studies, gender and sexuality studies, and studies of power dynamics, nationalisms and nation building, theories of embodiment, and identity.

The focus of the essays spans from the Middle Ages to the twenty-first century, and the contributing scholars occupy diverse fields within Latin American and Hispanic Studies. As such, their essays showcase eclectic critical and theoretical approaches to the subject of Latin American and Iberian food. You can view a list of the book’s essays and contributors on the Vanderbilt UP website.

Read on for an excerpt from Gómez-Bravo and Climent-Espino’s introduction to Food, Texts, and Cultures in Latin America and Spain:

A growing interest in food studies, particularly in relation to economic, environmental, political, and cultural issues, has translated into a large number of publications across a wide range of venues. From books such as Marion Nestle’s Food Politics or Michael Pollan’s The Omnivore’s Dilemma to the Slow Food movement, popular academic journals such as Gastronomica, Food and Foodways, and Food, Culture, and Society, and city-specific periodicals such as Edible Communities, food consumption choices are understood to have enormous impact on the environment, the socioeconomics of food access, and health and disease prevention. New scientific research on metabolic diseases (including state-of-the-art “omics” disciplines such as genomics, proteomics, and metabolomics) and other types of medical research in key areas such as nutrient needs and deficiencies or eating disorders have helped bring food studies to the fore. At the same time, fiction, mass media, and social media have increasingly been preoccupied with what people eat, along with the social, political, and environmental context of food. The consistent popularity over the last twenty years of films such as What’s Cooking (2000) and Fuera de carta (Chef’s Special; 2008), documentaries like King Corn (2007) and The Meaning of Food (2004), and fiction like Josep Pla’s Lo que hemos comido (2013) and Cristina Campos’s Pan de limón con semillas de amapola (2018) shows that the centrality of food remains inescapable. Food’s strong presence in social and visual media—for example, in the numerous iterations of Masterchef; food blogs like Gastro Andalusí (Jiménez), El Comidista-El País (López Iturriaga), and México en mi cocina (Martínez); and Instagram posts—brings attention to the visual components of food commercialization, consumption, and sociability, prompting new concepts and terms like “foodography” or “food porn,” coined by Rosalind Coward. The need to combine cultural studies with those based on the biological sciences has been underscored in several collective volumes in the field of food studies, most recently from a historical approach by Jennifer J. Wallach and Michael Wise, from a literary standpoint by Rita De Maeseneer, and from an interdisciplinary perspective in the studies collected by Montserrat Piera and Ángeles Mateo del Pino and María N. Pascual Soler, all of which correctly warn against trivializing a focus on food in academic humanities research.

From a curricular perspective, the rise of food studies programs in university structures and curricula clearly shows that food is a junction where diverse disciplines in the humanities, social and natural sciences, health and nutrition, and medicine can meet and begin productive dialogues and collaborations. The critical paths that lead from such intersections point to an exciting role for the humanities by creating a widening interest in interdisciplinary research and collaboration, for which scholars such as Warren Belasco have made a compelling case. As Lorna Piatti-Farnell and Donna L. Brien point out in the introduction to The Routledge Companion to Literature and Food, university courses on food fill up quickly, posing a strong pedagogical platform from which to engage students across disciplines, as well as presenting the humanities in a synergistic way with other fields. The role of the humanities in food studies goes beyond the analysis of mimetic representation to become a critical player in the disciplinary intersectionality at the core of food studies. At a time when the disconnect between people and the soil has grown to reportedly unprecedented levels, the study of food, texts, and cultures can contribute valuable insights to food studies, and the humanities can make a significant impact, adding meaning, creating content, and engaging powerful analytical lenses. An exciting related development is the incorporation of food topics into the Spanish curriculum, an increasingly popular addition to Spanish courses made easier by the recent publication of textbooks on Hispanic food and culture geared toward students enrolled in secondary and higher-education Spanish classes (Gómez-Bravo, Comida). [ . . . ]

Food-related topics may be perceived as deceptively trivial if approached as superficial elements of life at its more material and ephemeral, consumed without a trace and without a thought. However, food can provide a privileged vantage point that enables a disciplinary paradigm shift, a change in analytic angle that allows for a richer scope engaging multiple perspectives. Rebecca Earle has shown how food study can provide meaningful insight into colonial processes, their environmental impact, and the development of medical theory and practice. Similarly, [Priscilla Parkhurst] Ferguson’s study documenting the rise of the gastronomic field and locating it within a model of cultural ascendancy in France is one of many that can be deployed as background for exploring gastronomy’s use in creating culture differentials. Food can be a powerful tool, helping ground pervasive dichotomies of high and low cuisines and cultures as well as cultural-dominance narratives and imperialism practices. For example, the study of literary texts such as Pablo Neruda’s “Oda a la papa” can help explain the central symbolic position of the potato in the Chilean imaginary as both an expression of its ethnic identity (“eres oscura / como nuestra piel, / somos Americanos, / papa, / somos indios”) (“you are dark / like our skin, / we are Americans, / potato, / we are Indians”), its geography (“Chiloé marino”), and its gustatory and culinary profile in ways that help set it apart from Inquisitorial, Imperial Spain (“España / inquisidora / negra como águila de sepultura”) (“Spain / inquisitorial / black like the eagle over a grave”). Gastronomic borders that both separate and unite communities in situations of contiguity can be explored through the concept of isogastrias, a term coined by Emilio Alarcos Llorach (9) and further developed by Rafael Climent-Espino (“Miragens do Japão” 60–70). Isogastrias are imagined lines that delimitate ethnic communities according to their particular gastroculinary practices. [ . . . ]

The considerations presented here may lead to a conceptualization of food as the ultimate disciplinary medium. In its organic materiality, food is rehumanizing and may provide the best cure for post-humanist blues. The studies included in this volume showcase the advantages of the critical use of a food lens within colonial studies, ethnic and racial studies, gender and sexuality studies, as well as power dynamics, nationalism and nation-building, and theories of embodiment and identity. These chapters contain important synergies that point toward continuities and lines of inquiry that go beyond a strict compartmentalizing periodization. Food hierarchies and their relation to New World and Old World taxonomies are discussed in Chapters 2, 3, 4, 9, and 10. The relevance of a transatlantic outlook when studying the Hispanic world is made evident in Chapters 2, 3, 9, and 10. The cultural, symbolic, and economic significance of key foodstuffs like maize is dicussed in Chapters 2, 9, and 11. Textuality and cookbook writing is explored in Chapters 4, 7, and 8, with Chapters 4 and 7 examining the key work of Martínez Montiño. Chapter 12, which emphasizes the importance of studying hunger, can be read alongside Chapter 5 for the contrasts it highlights between hunger and excess, and alongside Chapter 13, which points out how food scarcity and food access can shape a generation. Chapters 1, 10, and 11 point out how food can be used as an important factor in nation-building while emphasizing the positive or negative valuation of foods associated with racialized minorities, while Chapter 5 examines the combined factors of immigration and nationhood in the construction of a culinary capital.