Theory of the Big Dance.

Â My sh*t doesnât work in the playoffs. My job is to get us to the playoffs.
What happens after that is f***ing luck.

What can explain the apparent randomness of the NHL compared to the determinism of the NBA reflected in these divergent post-season results?

The most intuitive answer for post-season random outcomes is that the NHLÂ  seeding process matches up front teams of equal strength in the early (first) rounds.

This could possibly be the case in this post-season comparison, because the NHL tournament is relatively division-centric and the NBA has gradually become more conference-centric over time for precisely this reason. NBA teams withÂ better overall records were being bumped from seeding in theÂ post-season by inferior teams that placed higher inÂ a weaker division of the same conference.

SinceÂ 2016, the NBA has seeded playoff teams solely by their record, throwing out the top-four protection for teams who win their divisions.

Prior to 2016, division winners were guaranteed noÂ lower than the 4 seed, a rule that became heavily criticized in 2015 when Portland ended up 4 in the stronger Western Conference despite the sixth-best record in the conference.

Teams in each conferenceÂ areÂ now seeded from one to eight by their won-loss record,Â regardless of how they finish in their division.

Over/Under Seeding with the NHL Format?

In the table above, the actual NHL 2019 post-season match-ups are shown by a team’s and opponent’s rank within their division and conference, and then compared toÂ a hypothetical seeding using the NBA conference reverse rank format. The winning Round 1 teams are shown in the eight highlighted rows with their ranks and series win probabilitiesÂ against opponents in both seeding scenarios.

Based on the NHL division formula 12 teams faced lower (rankÂ difÂ > 0) or equally (rank dif = 0) seeded teams than they would haveÂ using the NBA format. The notable 4 exceptions (rank difÂ < 0) occurred for seeds 2 and 3 in the weaker 2 divisions (Atlantic and Pacific)Â where only the required 3Â teams qualified. These 2 polarized divisionsÂ had the highest overall conference seed with no wild card teams.Â

If the division format isÂ the cause ofÂ the apparent randomness of the NHL playoffs,Â thenÂ two upsets should have occurred inÂ this pair of 2-3 series that matched these 4 teams that were facing tougher opposition than under the NBA format.Two of the under-seeded 2-3 teams had to lose because theyÂ are playing each other by rule.

As favored 2-seeds, the Boston Bruins and San Jose Sharks each defeated their 3-seed opponents, Toronto and Vegas.Â In the process the last of the NHL big-market clubs and last year’s Cinderella expansion team were eliminated.Â

All of the top seeded teams in the 4 NHL divisions lost to the lowest seeded wild-card teams from their conferences. UpsetsÂ appear in theÂ table as an underdog bottom 4 team defeating a favored top 4 seeded conference opponent.Â

Two of the NHL upsets in random round one came from wild-card teams (Colorado and Columbus) thatÂ defeatedÂ division leaders that were seeded in the sameÂ (1-8) they would have been seeded with the NBA reverse-rank conference formula. The same is true of St. Louis facing Winnipeg in either a 2-3 match division match or a 3-4 conference series.

The division based seeding format may be self-defeating in terms of premature elimination of quality teams ranked 2 or 3, or the slight advantage to the 7th best team (where winning chances improve by 4% – 6%) in either conference, but it does not appear to be the primary cause of the random outcomes in the first round of the NHL playoffs, because 3 upset teamsÂ had the same opponents under either format.Â

Do the better NHLÂ and NBA teams usually win?

in the graph below observed standard deviations of winning percentages within the 2016 season showÂ theÂ spread between good and bad teams in the BigÂ 4 NA sports leagues. For most recent seasons click here. 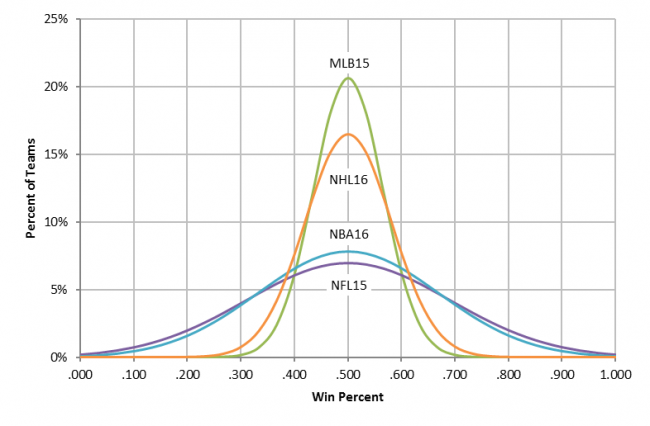 Based on theseÂ observed standard deviation resultsÂ it appears that the spread between good and bad teams is the greatest in the NFL and NBA and the least in MLB with the NHL lying somewhere in between. This is not necessarily true because accurate inter-season comparisons ofÂ competitive balanceÂ across sports leagues need to be normalized for different season lengths. 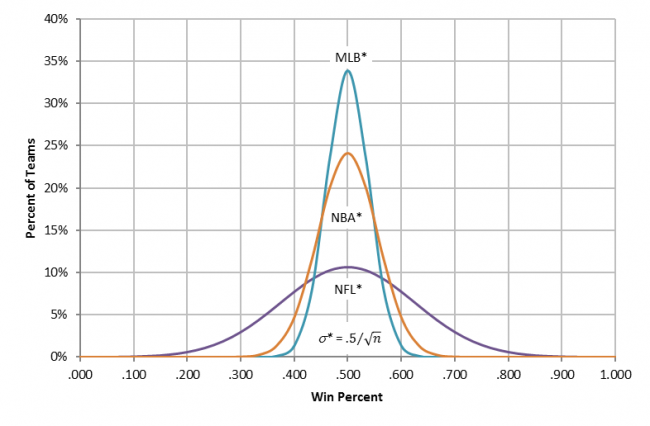 The standard deviationÂ of winsÂ withinÂ aÂ league’s regular season varies inversely with the square root ofÂ season length (Ï* = .5/ân), because each game is onlyÂ one sample of the relative talentÂ between clubs. (Like one coin toss.)Â

In the above graph the observed imbalance (win spread) in the NBAÂ appears to be moreÂ like the NFL than the NHL. After controlling for season length it now appears that the NBA regular season is more imbalanced than the NHL (sameÂ Ï* with higherÂ Ï) or the NFL (sameÂ Ï with lowerÂ Ï*).Â 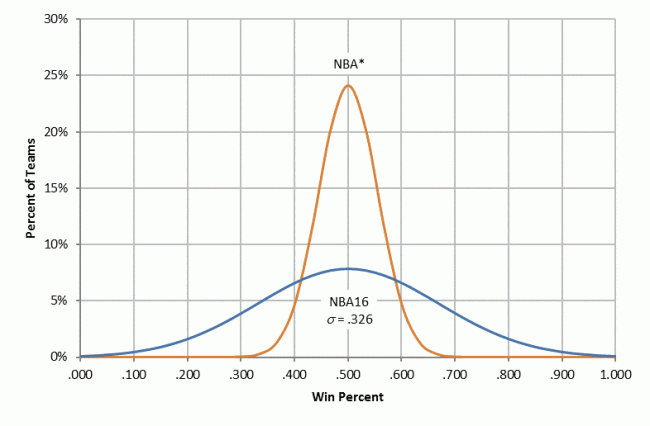 This competitive balance index CBI can be usedÂ to compare balance in leagues of different season lengths n. This CBI is preferred to its well-known inverse Noll-Scully index because the values range between 0 and 1. 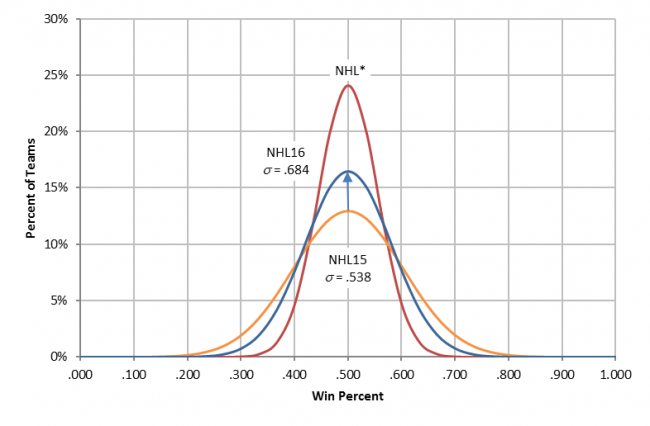 This controlled result supports the general conclusion that the NHL is more competitive balanced (random) than the NBA and that theÂ NHL is approaching the random competition of the NFL.

The NHL and the NFL both have hard salary caps and compared to the NBA, which has a soft cap that can be exceeded with several exceptions. The NBA soft cap is now backed by a effective luxury tax on payrolls with increasingly progressive rates. MLB has no salary cap and a luxury tax that until recently only affected a few teams with exceptionally high payrolls.

Here are the normalized CBIs for MLBÂ and the NFL for 2015.Â For most recent seasons click here. 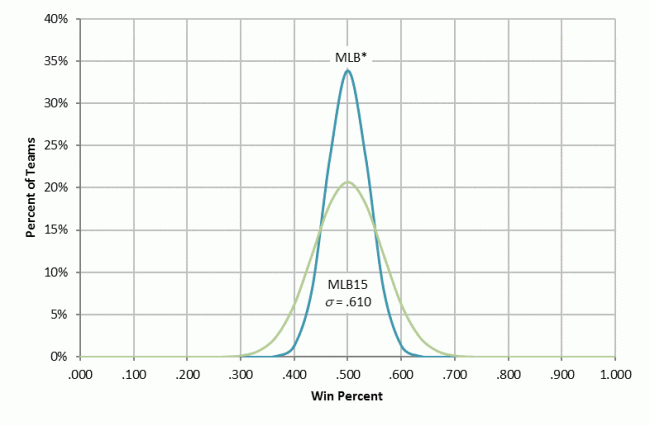 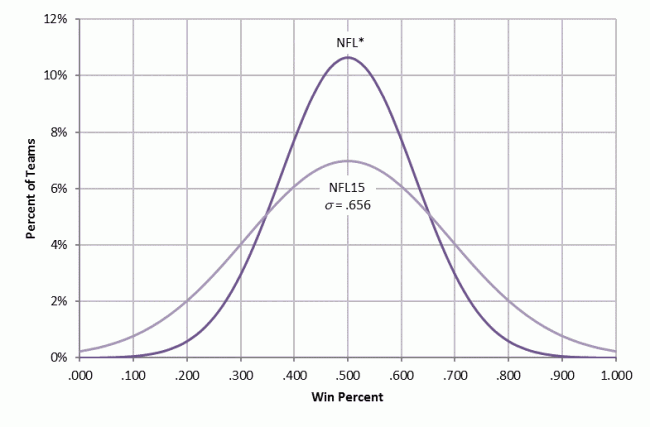 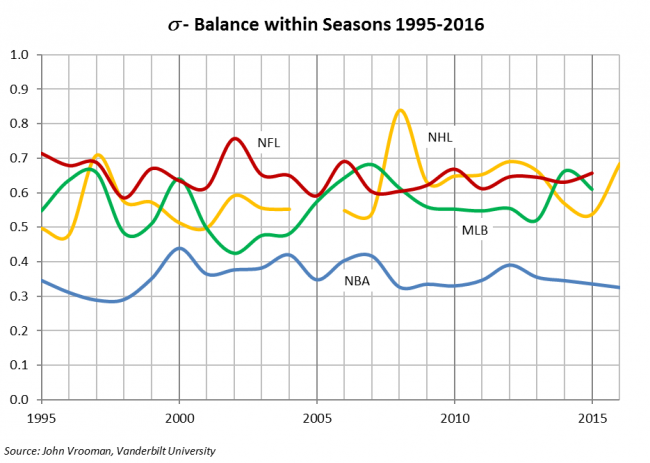 The result of the MLB 162-game regular seasonÂ is the Truth. 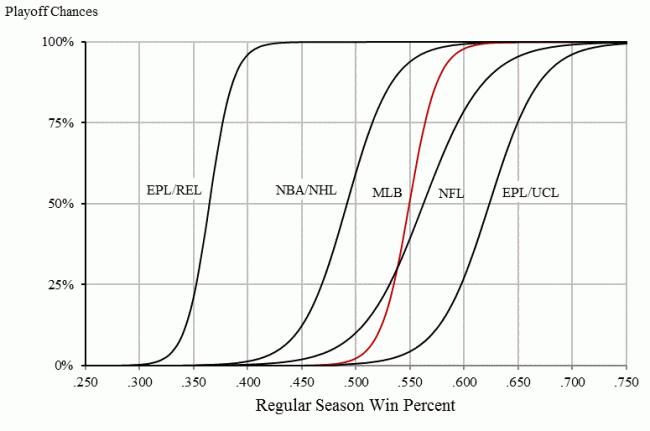 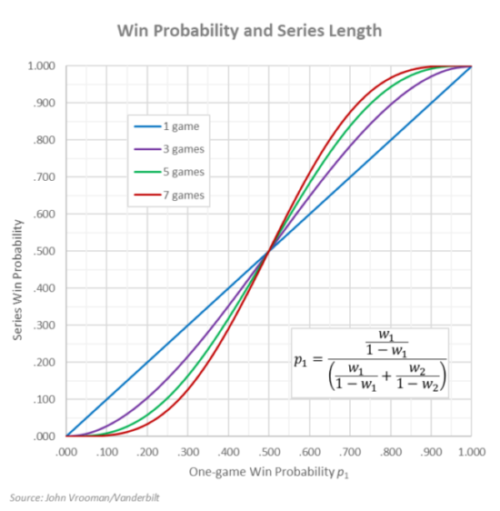 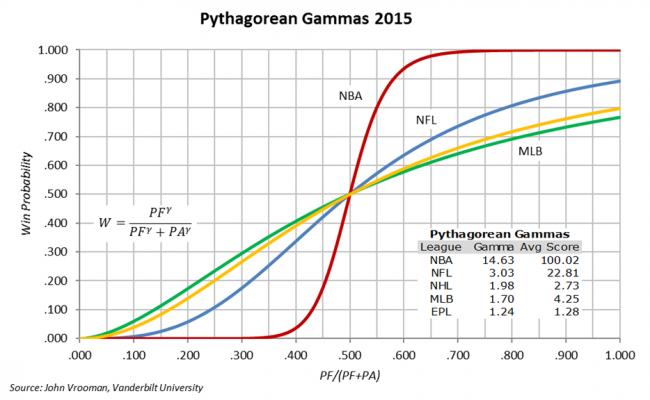 Solution: In MLB the season result is the statistical Truth, but in the NBA the result of each game is the Truth.

The same reasoning that the best team in MLB usually prevails at the end of a relatively long 162-game season, can be used toÂ support the argumentÂ that the better team will usually win the average NBA 90-shot 100-point game (45% efficiency). Each NBA possession is a sub-game within the game.

For example, the Portland Trailblazers may lead the Golden State WarriorsÂ deep into theÂ second half butÂ the better team will emerge by the game’s end and the probability of the higher seed’s winning only increases with the series length. Top seeded GSW recently swept the 3-seed Blazers 4-0 in the 2019 NBA Western Conference Finals after trailing late in the last 2 games of the series.Â

By comparison the average NHL team (yellow CPD in above graph) takesÂ about 30 shots on goal (fewer during the playoffs) and scores and average of less than 3 goals per game (10% efficiency) dependingÂ on the goal-tender.