The bigÂ market clubs in NYC (MSG), LA (Staples) and Chicago (United) are noticeablyÂ absent from the NHL and NBA playoffs. Toronto Maple Leafs were knocked out in the first round of the playoffs and they haven’t won a Stanley Cup in 50 years.Â

Why areÂ high revenueÂ clubs not dominating theÂ NBA and NHL as expected?Â

On the demand side, most professional sports clubsÂ have local monopolies (only one seller) in their respective home product markets (gate, venue and local media revenues), because multiple team product markets are inferior negative-sum moves in league expansion. Existing multiple team markets are usually theÂ post-facto result of rival league mergers in the past. (See the dual market theorem.)

On the supply side, competing sports clubs are usually assumed to be passiveÂ  “price takers” in a competitive labor market because no club has the power to set theÂ market clearing free-agent rate. In this case the profit maximizing large market club would dominate the small market club by roughly the same ratio as their market sizes.Â 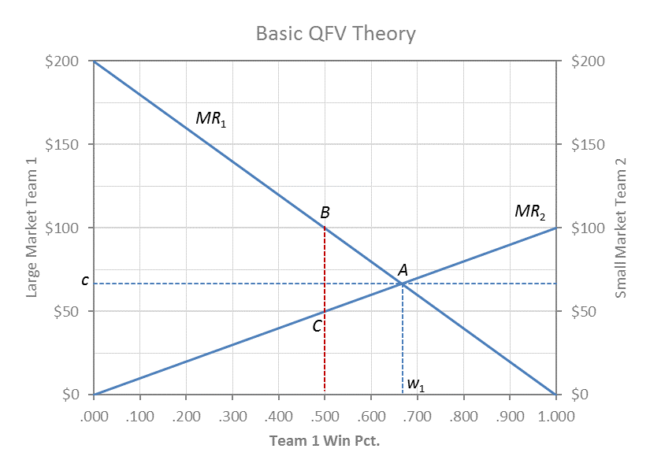 MR1 is the derivative of the revenue function for team 1Â and the curve slopes downward because ofÂ diminishing marginal revenue for winning (fans prefer winning competitive games rather than blowout after blowout).

The respective profit margins are the areas of the respective triangles between each team’s MR and its team payroll. The rate of talent exploitation is zero because players are paid (c) their MR (marginal revenue product) at A where c = MR1 = MR2. 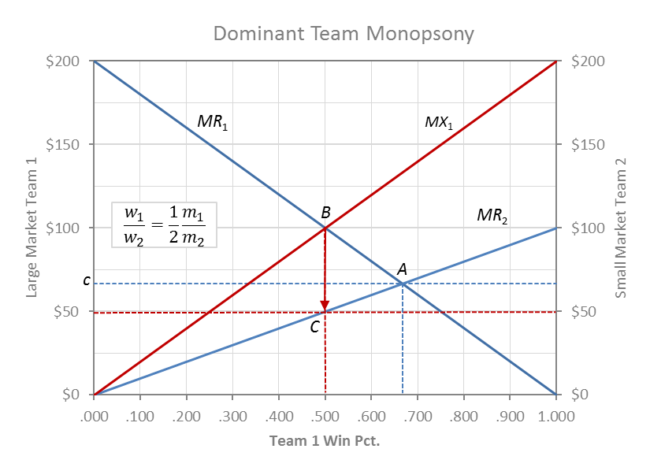 If the large market club had dominant monopsony (one buyer) power in the labor market to set the wage rate, thenÂ it wouldÂ lay back and maximize profit by not paying any more for talent than the maximum small market team would pay along MR2.Â A monopsony clubÂ would only have to match the best offer at C from team 2.

InÂ the monopsonyÂ case the league profit-max equilibrium would be at B and the players would only be paid the wage rate $50 at point C. Team 1 would maximize profit by exploiting talent at C on MR2 whenÂ talent is really worth MR1 at B.

In monopsony labor theory MX1 is the dominant team’s “marginal expenditure” curve andÂ MR2 serves as the labor supply curve for Team 1 (MX1 = 2 MR2). Profits for the dominant monopsony Team 1 are maximized at point B where MR1 = MX1. 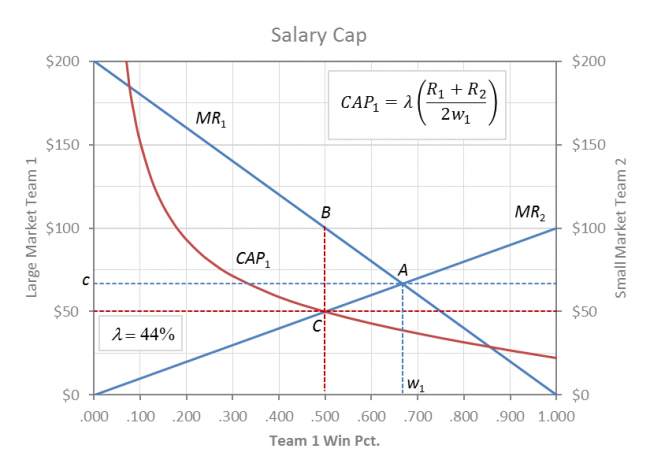 Both teams are better off in a balanced league (w1 = w2), becauseÂ their mutual profits are derived fromÂ the exploitation of talent (c < MR). TheÂ hard salary cap (set at 44% of league revenues in this case) in the above graph is an effective profit-max instrument that ensures the monopsony club’s exploitative (c < MR) solution at point C.

Team 1 cannot take its payroll above the CAP1 contour and so the constrained league equilibrium liesÂ at the intersection of CAP1 and MR2 at C.Â Player payroll decreases by the rectangle c – $50 and the profit exploitation gains are split evenly between the clubs.

Under dominant team 1 monopsony profits increase for both clubs, but total league revenue and social welfare are actually decreased by the area of the lost triangle ABC. Team 2’s revenue gain at .500 is more than offset by the decline in revenue for team 1.

In this respect a dominant monopsony salary cap is welfare inferior because team 1Â has more excluded fans who are willing to pay more for large market team 1 to win than small market team 2, and profit increases are derived from player exploitation c < MR1 at C. 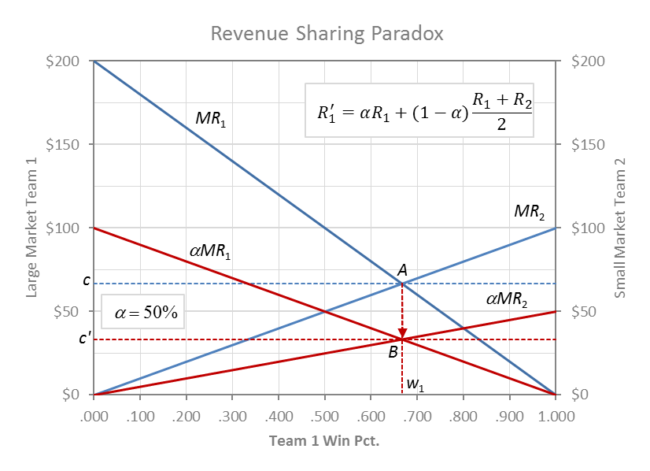 Intuition suggests that the more random outcomes in the NHL are perhaps associated with competitive balance engineering through increased revenue sharing. ThisÂ would be true if owners are sportsmen who spend all their revenue on talent, but if owners are profit maximizers then this is not the case.

Most revenue sharing schemes are pool-sharing formulas (like the one in the graph) where the home team keeps a percentage Î± of local revenue (first term in graph) and contributes the visitors’ share (1 – Î±) to a pool that is then split equally among the rest of the league (second term in graph). The advantage of pooled sharing is that it equalizes the visitors’ share across the rest of the league.

As the home-team share decreases, the economic incentive to win simultaneously decreases proportionately among all teams by the proportion of local revenue that is shared (taxed). In the above graphÂ the MR curves shift downward in the same visitors’ share proportion for both clubs.

The league equilibrium shifts from A to B where theÂ balance between teams remains the same as without revenue sharing, but the going wage rate drops from c to c’ by the percentage of revenue that is shared, (1 – Î±) = 50% in this case.

This leads to the invariance proposition: Competitive balanceÂ remains unchanged by revenue sharing, but the degree of exploitation of talent increases by the amount of revenue that is shared (1 –Â Î±). More advanced analysisÂ later shows thatÂ revenue sharing actually leads to less balance for profit maximizing teams.Â

The paradoxical result is best explained by viewing revenue sharing an instrumentÂ  of progressive product market cartelization of seemingly competitive clubs in the monopoly league-cartel. The amount of revenue shared (1 –Â Î±) serves as an index of the degree of cartelization in a monopoly sports league cartel.

In the graph the revenues of the two clubs are the home-team Î±-share areasÂ under their respective MR’ curves, plus theÂ total area between both MR and MR’ curves split equally between the clubs as their visitors’ share. Profits areÂ each team’s revenues minus their respective payrolls that are progressively shrinking under c’.

At the Î±=0 revenue sharing limit, the players share has been reduced to their reservation wage c’ =Â Î±c â0 and the league has become a perfectly syndicated cartel where all teams have an equal revenue share, (R1 + R2) / 2.

As Î±â0 payrollsÂ sink to a minor league level (reservation wage), both teams benefit from large-market dominance and the cartel’s joint profit maximum objective is the same as revenue max at w1/w2 = 2/1.

When revenue sharing and salary cap are combined (NFL), revenue sharing progressively defeats the cap as Î±â0Â and ultimately competitive balance decreases from .500 back to w1 = .667.

If the cap has also has a minimum (NFL, NBA and NHL) thenÂ Î±â0Â  would ultimately leadÂ back to absolute balance at .500, where both profit max clubs would have the same payrolls at the salaryÂ minimum.

If the owners are win-maximizing sportsmen then all revenues would be spent on talent. In this case profit margins would be zero, and the large market club would totally dominate the smaller club 1.000/.000. Revenue sharing and/or salary caps couldÂ reverse engineer the optimal competitive balance.Â Â

For full development of QFV Theory see Two to Tango.