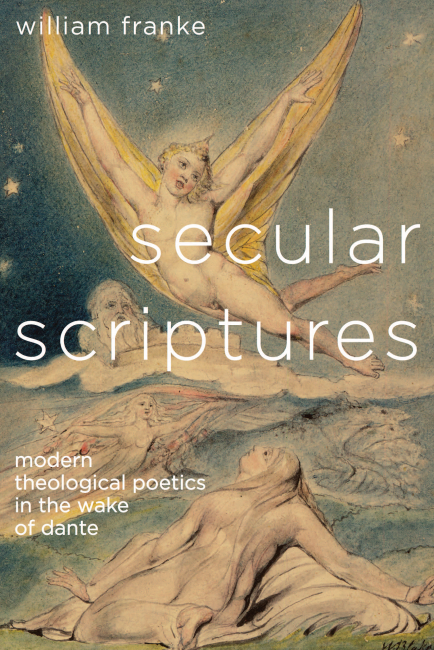 âI readÂ Secular Scriptures almost without putting the work down. Readers in fields fromÂ fin-de-siÃ¨cle decadence to âpost-postmodernismâ in poetry, especially those with interest in religion and literature studies, will be delighted by the way Dante is recast here to preface twentieth- and twenty-first-century developments. Frankeâs way of thinking backwards from recent postsecular theory is beguiling and transformative; the movement forward in the final chapter, via Danteâs emerging again at the end as at the beginning, is really rather beautiful.âÂ Â Â Â Â Â Â Â Â Â Â Â Â Â  âRomana Huk, University of Notre Dame 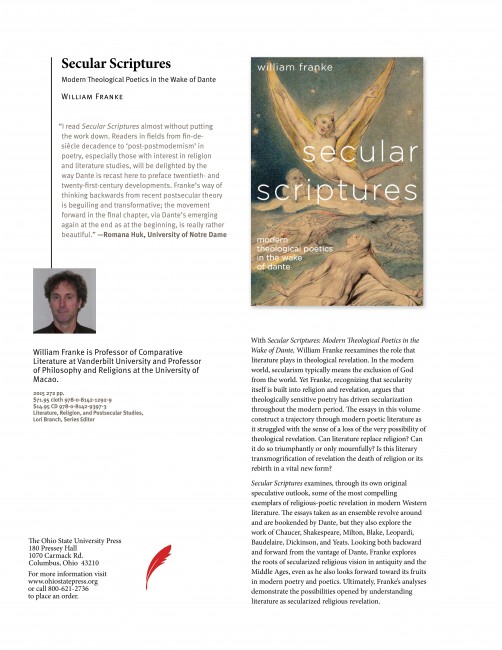 Chad Schrock in Literature and Theology

“The interdependence of religion and secularity is widely acknowledged at presentâthat is much of what âpostsecularismâ meansâbut Franke breaks
the news that the literary canon of modernity from very early on is the best place to
track their dynamic interdependence, and that Dante is the place they really start to
work together. Secular Scriptures is a quintessentially postsecular hymn to the sustained revelatory power of apophatic literature. . . . this collection is stimulating, important, and timely.”
Â _______

âWilliam Franke is similarly concerned with the status of the materiality of the image. As part of his argument in Secular Scriptures: Modern Theological Poetics in the Wake of Dante, Franke argues that Miltonâs religious commitments lead him to reclassify poetic imagery as ânonsacramental.â . . .Â  his comments on Paradise Lostâs substitution of poetic evocativeness for poetic transcendence are key to his bookâs thoughtful series of essays, which stretch all the way from Dante to W. B. Yeats.âÂ  — Katherine Eggert, Â SEL 57/1 (Winter 2017): 189-91