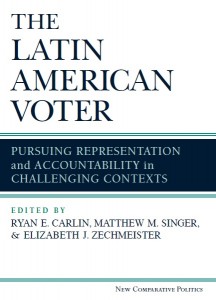 Despite some fits and starts, democracy in Latin America has progressed beyond its initial transitional period. Although democracy is not equally sturdy in every corner of the region, the unique politics of transitions has given way to more regularized patterns of electoral politics. At the same time, the field of comparative politics recently has seen nothing short of an explosion of interest in and studies of public opinion and political behavior in Latin America.

The Latin American Voter takes stock of this quickly emerging field and provide answers to these questions about electoral behavior in Latin America: (1) Who votes? (2) What attributes and judgments influence vote choice? (3) What factors distinguish voters in Latin American countries from each other and from citizens in other contexts?

The Latin American Voter is available from the University of Michigan Press.

The volume is aimed at scholars of public opinion, electoral behavior, and Latin America. It is also designed for use in advanced research seminars (undergraduate and graduate) on comparative political behavior and Latin American politics. The release of the book will be accompanied by supplemental files containing codes for the analyses presented in the book, enhancing the reader, scholar, and student experience with the volume.

The core dataset used for this project is LAPOP’s AmericasBarometer survey; more information on that project can be found at www.vanderbilt.edu/lapop.

May 17-18, 2013 conference sponsors: the Latin American Public Opinion Project (with support from the Tinker Foundation), the Mary L. Armistead Fund for the Norman Thomas Lectures , the Public Law Lectures Fund, the Center for the Study of Democratic Institutions (CSDI), and the Department of Political Science at Vanderbilt University.