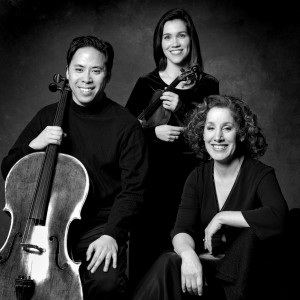 Founding members Amy Dorfman, Carolyn Huebl, and Felix Wang, each acclaimed performers in their own right, formed the Blakemore Trio when their artistic paths crossed at the Blair School of Music at Vanderbilt University in 2002. Since then, the trio has developed a national reputation, performing on chamber series throughout the country and making their New York debut at Merkin Hall in 2010. Critics have hailed the trioâs âall-but-perfect sense of ensemble, expressive phrasing, and great intonationâ and have described their performances as having âriveting intensity.â

2013 brought the release of the trioâs first two recordings, The Blakemore Trio plays Beethoven and Ravel (Blue Griffin Records), and Gates of Silence, composed by Susan Botti (Albany Records). Critics raved, âanother chamber ensemble has arrived to claim the limelightâ¦for Beethovenâs âGhostâ Trio, they donât come any better than this one.â The Ravel performance was hailed as âImpressionism at its best.â

The trioâs repertoire spans the spectrum of the literature, from Beethoven, Brahms, and Ravel to Rochberg, Schnittke, and Tower. Their affinity for contemporary music has led the trio to commission new works as part of their mission. Recent seasons have featured world premieres of trios written for them by award-winning composers Susan Botti, Shueh-Shuan Liu (in collaboration with the Chinese Dance Theater of Nashville), Paul Osterfield, and Adam Schoenberg. The trio was also awarded an ENCORE grant from the America Composers Forum, in support of performances of music by Chilean composer/pianist Alfonso Montecino. Deeply committed to education, each are associate professors at the Blair School of Music.