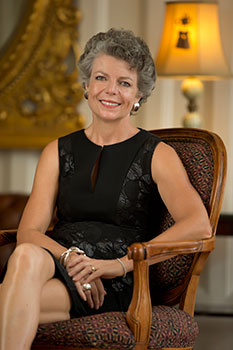 Camilla Persson Benbow is Patricia and Rodes Hart Dean of Education and Human Development at Vanderbilt University’s Peabody College, a position she has held since 1998.

Dean Benbow’s scholarly work focuses on gifted children and the development of mathematical talent. Benbow co-directs the Study of Mathematically Precocious Youth (SMPY), a longitudinal study examining the developmental trajectories of over 5,000 individuals throughout the life-span. She is particularly interested in identifying the educational experiences and interventions most conducive to developing intellectual talent and excellence in careers in science, technology, engineering, and mathematics.

Benbow began her academic career at Johns Hopkins University in 1981 as an associate research scientist. In 1986, Iowa State University appointed her associate professor of psychology. She was promoted to full professor in 1990, became department chair in 1992, and in 1995, was named distinguished professor. She was appointed interim dean of education at Iowa State in 1996. While at Iowa State she also directed pre-collegiate programs for gifted and talented students.

Benbow served on the National Science Board from 2006 to 2012. From 2006-2008, she served as vice-chair of the National Mathematics Advisory Panel and as a commissioner of the Science and Mathematics Teacher Imperative, an initiative of the National Association of State Universities and Land-Grant Colleges. Benbow also serves on the board of the American Psychological Foundation and was co-founder and former co-chair of the committee of AAU College of Education Deans. She recently co-chaired the Commission on Standards and Performance Reporting that developed new accreditation standards for the Council for the Accreditation of Educator Preparation. She also is a former member of the Fisk University Board of Trustees.

For more information on Dean Benbow, please see her CV.