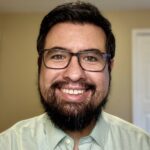 Christopher A. Candelaria is an Assistant Professor of Public Policy and Education at PeabodyÂ College of Vanderbilt University. His research interests include teacher labor markets, education finance policy, and Federal and state-level accountability. Some of his current work includes estimating the causal effect of court-ordered finance reforms on revenues and graduation rates during the so-called Adequacy Era; estimating and characterizing the longer-term effects that teachers have on student achievement; and evaluating policies associated with NCLB waivers on student outcomes and resources.

Prior to his doctoral studies at Stanford University, Professor Candelaria worked for four years as a research associate in the economic research department at the Federal Reserve Bank of SanÂ Francisco. He has also worked as a high school math teaching assistant for the Los AngelesÂ Unified School District.