Thinking about and interacting with living and mechanical agents 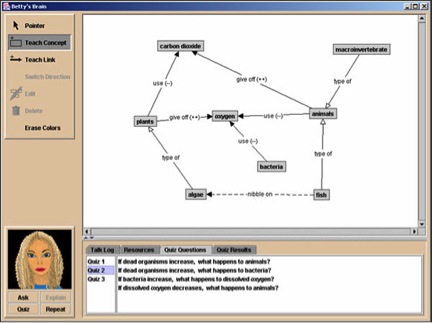 In this project, we have been exploring how middle-school childrens’ concepts about agents such as people, robots and computers affect their use of the “Betty’s Brain” teachable agent system. Developed by Vanderbilt’s Teachable Agents Group led by co-PI Gautam Biswas, the Betty’s Brain system is a web-based software environment designed to help middle-school students learn the complex causal relationships inherent to a range of natural biological systems. The key to the system is Betty, a teachable agent that students interact with as they learn topics within their science curriculum. To use the system, students must read text-based science materials, create a concept map that represents causal relationships among important processes described in the text, and teach all of this to Betty using a series of interactive dialog boxes. By presenting an anthropomorphic agent, the system is intended to invoke enhanced metacognitive monitoring as students must more effectively evaluate their understanding of course material in order to teach it to Betty, and monitor her understanding.

In this project, we are asking whether children who have particularly clear concepts about agents (as measured by our behavioral prediction scenarios) more effectively learn the course materials, and, conversely, whether using the system clarifies children’s understanding of fundamental differences in the intelligence inherent to people and mechanical agents such as computers. In a series of experiments, we have observed both relationships. Children who understand that human behavior is goal-based and can use this understanding to predict a person’s behavior are learn more from the Betty’s Brain system, and children who use the betty’s brain system more effectively distinguish between humans and machines when making behavioral predictions (for an initial report on these findings see Hymel, Levin, Barrett, Saylor, & Biswas, in press). We hypothesize that a good understanding of agency helps children to deal effectively with teachable agents because they are more able to understand the pattern of capabilities and weaknesses inherent to machine intelligence. In follow-ups to this work, we hope to develop an intervention that helps children better understand this pattern, and hopefully to improve their interactions with the system.

Hymel, A, M., Levin, D. T., Barrett, J, Saylor, M.M., & Biswas, G. (in press). The interaction of childrens’ concepts abut agents and their ability to use an agent-based tutoring system. Proceedings of the 2011 HCI intentional conference