Healthcare in the Shadows

The Clinic at Mercury Courts 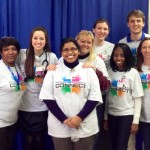 The paint on the red door is chipped and the flower boxes no longer hold even artificial flowers but don’t let the outside appearance fool you. Â Inside this small brick structure located at the street entrance of a 50 year old motel converted into transitional housing units, something special is happening. Â Today, E. came screaming through the front door: “Aaron, Aaron, I need to see Aaron!” Â It’s a bit of a shock, when she enters like a tornado, but the medical assistant/receptionist is not rattled. Â “Ok, E. it’s ok,” she says. Â “Aaron’s with a patient but come with me, he’ll see you as soon as he gets finished.” Â E is led back to a private exam room, away from the small waiting room. Â I wonder what that’s all about but none of the staff seem concerned, and the other patients in the waiting room seem unmoved also.

It turns out that E suffers from panic disorders and others in the complex where she lives like to verbally taunt her sometimes and that sets her off. Â Her lifeline is a nurse practitioner named Â Aaron, whom she trusts and she runs straight to the clinic on her way to catch the bus to go to work. Â E can’t work when she is in these full blown screaming fits of agitation and since her income is below $12000 per year, missing work is a big deal for her. Â If she can’t clean hotel rooms, she may not eat this week. Â After about 10 minutes she emerges from the exam room and walks calmly through the clinic and out the door. Â The bus stop is across the street and she heads there, quietly.

“What did you do?” I ask Aaron. Â “Did you give her an injection or a prescription?”, thinking surely no one could go from hysteria to calmness in such a short time. Â “She comes in here a lot when people get after her. They know she is fragile and it doesn’t take much to set her off. Â I just listen to her and talk to her. She calms down.” Â Aaron is pretty modest about his role in all this. Â The medical assistant tells me that E will only talk to Aaron and that he has a magic touch with her.

She’s not the only patient who depends on him and the team at Mercury Courts. Â 70% of the patients have no insurance. Many are disabled by mental health issues as well as physical challenges that years of chronic illnesses like diabetes, asthma, Â hypertension and heart disease can bring. Â Most of them are between 35 and 64 years old, not eligible for Medicare and they do not qualify for state Medicaid in Tennessee either. Â They fall into the famous GAP, which the Affordable Care Act was supposed to fill with mandatory Medicaid expansion, except the Supreme Court decision abolished the mandatory part and voluntary expansion never happened in Tennessee and there is little chance it ever will. Â  These patients, living below federal poverty levels, with a myriad of social, physical and mental challenges are simply not on any politician’s radar and thus are cut off from the mainstream healthcare system. Â They live in the shadows of society.

When the clinic first opened in 2012, it became quickly apparent that the majority had had no access to primary and preventive care for many, many years. Diseases had gone undiagnosed and untreated for a long time. Â The team, composed of the lead nurse practitioner (Aaron), his NP practice partner (Jannyse), community pharmacists (Chad & Robin), social workers (Paula and Jenna), physician (Trent), part time clinic manager (Christian), uses an interprofessional collaborative approach to address the many issues confronting the 1400 unique patients seen in the clinic. Â The majority live in public housing and their incomes fall below $12000 per year.

Like the Little Engine that Could, this little clinic (3 exam rooms, 1000 square feet) persisted and has made a positive impact on their patients’ health over the past 3 years. Â More patients with hypertension are getting medications and showing big improvements in their blood pressure readings. Â A number of smokers have successfully decreased or eliminated their tobacco use. Â Screening for cervical cancer has increased–which is important at this site. This part of town is known for its prostitution activity. Â The community outreach worker, employed by the public housing agency, works diligently to build trust with the prostitutes and pimps, to get the women into the clinic for care. Â Her efforts have paid off, according to the team.

The work of this nurse practitioner-led team is laudable but federal funding runs out in June. Since the site has a unique grasp of interprofessional collaboration, the School of Nursing at Vanderbilt and the School of Pharmacy at Lipscomb University have made a financial commitment to continue their work at this site. Â The clinic has had over 100 health professions trainees flow through since 2012. Â Students from medicine, advanced practice nursing, graduate social work, pharmacy, physician assistant programs, and clinical informatics have spent weeks and months assigned to work with the Mercury Courts collaborative practice team. One program, the Vanderbilt Program for Interdisciplinary Learning (VPIL), sends its students there as a student team, composed of students in medicine, nursing, social work, and pharmacy. Â These VPIL teams are assigned to the clinic for 2 years providing great continuity and the opportunity to work together to improve patient outcomes. Â By all accounts, this training site is consistently recognized as highly valuable by the trainees.

There will be challenges, after the federal funding is gone, Christian tells me, but they are committed to writing grants and telling their story to anyone who will listen, so that the clinic can continue to fill this enormous gap in access to care. Â This clinic lives in the shadow of Nashville’s well oiled and highly touted healthcare industry, but it shines a light in the lives of 1400 people who had no hope of care before it opened.