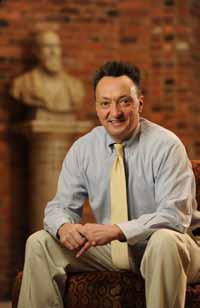 Like the entire faculty of our Department, I work hard to maintain a relationship between my research and teaching interests. For instance, I have published work that focuses on mass media production and consumption and use this background in my Rhetoric of Mass Media course. My current research on public discussions of gender ambiguity led to the creation of a course entitled “The Rhetoric of Gender Trouble.” As a result, I try to encourage students to work, write, and speak on areas that are vital to their lives–past and potential.

In 1996, I published my first book, The Cultural Prison (University of Alabama Press), which was published in paperback in 2006..

The University of Massachusetts Press published my, Disciplining Gender: Rhetorics of Sex Identity in Contemporary U.S. Culture, in 2004.

I am currently working on a series of case studies dealing with gender, sexuality, citizenship and mediation.

On a separate note, I served as editor of Communication and Critical/Cultural Studies for Volumes 4-6, 2007-2009.

For an overview of my research and service, see my vita.

Courses taught (note: the courses below are no longer web links, as I am moving all courses to Blackboard)

Mail (and Marlon Brando postcards) can be sent to: