I had spent 1967-68 as a freshman at Michigan State University. I then worked at Oldsmobile on the assembly line in the summer. I decided to plan on continuing to Â work at Oldsmobile during the Fall of ’68 with the plan of making some money before I returned to school in January. But giving up my student deferment made me eligible for the draft. So I was in the Army as of Oct. 17, 1968. After 8 weeks of basic training at Fort Bragg NC and two months of Advanced Infantry Training at Fort Polk Louisiana, aka Tigerland, I was shipped to Vietnam and assigned to 3rd Platoon, Charley Company, 5th of the 12th, 199th Light Infantry Brigade.

Upon joining the company (three of us were assigned at the same time: me, “Stinger,” aka Nelson Bunch, who was a black guy from Harlem, and a very white guy from Minnesota whose name I don’t remember) the Executive Officer told us our company had 95 people in it. He also told us we had had five KIA’s so far that year (it turned out we had 10 KIA’s for all of 1969), and that most wounds were loss of feet, hands, and eyes from booby traps. Â To me, it didn’t sound good.

The company was divided into a headquarters unit–company clerk, executive officer, company commander, armorer, supply sergeant, maybe some others I didn’t know–a mortar platoon, and three rifle platoons. Platoons were divided into three squads, and were sometimes led by a Lieutenant, sometimes by an E-6 sergeant. Â Squads would vary in size, but usually were 6-7 people, almost always less than 10 people.

Our unit was stationed in the Mekong delta southwest of Saigon when I joined it. This was an area of rice paddies and waterways. The most common injuries were from booby traps, now known as IED’s, one of which I hit on May 20 while I was the RTO (radio-telephone operator, which meant I carried a 25-pound radio) for Lieutenant Pierce. I spent a week in a hospital in Saigon, then a long time in a hospital in Cam Rahn Bay. During that time, one of the squads “visited’ me courtesy of them having been on an armored personnel carrier that was blown up by an IED. Â The picture below shows me with Steve Ferragamo, who was with me in the hospital. Â He was hit with schrapnel in his back during a firefight–he was with the 9th Division–and was perhaps my closest friend in the hospital. Â We were both from Baltimore–hence the Maryland flag in the background. Steve told me that when he got hit, his platoon was ambushed, and got just a few VC, but had lots of their own injured (like him). When the Colonel came by the hospital to pin his Purple Heart (and Bronze Star) on his pillowcase, he talked as if it was some big win for us with lots of dead VC. It was the first (but not the last) time i saw how the body counts got bigger as reports moved up the chain of command. 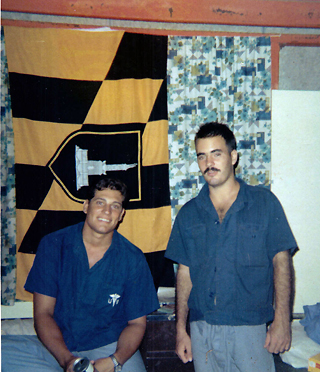 I returned to the field in early July. Â We were in triple-canopy jungle northeast of Saigon: no more booby traps, no more mud that could suck your boots off, but still leaches, mosquitos, and firefights. Â Our routine was to hump the jungle about three weeks at a time–sometimes less, sometimes as much as five weeks– doing cloverleafs (two squads would move out in a circle pattern from the main route, one circle to either side, checking out the jungle about 100 meters on each side) as we went, with the hope (by the Brass) that we would encounter NVA/VC. Â At night we set up in an NDP-night defensive position–which meant we had a perimeter of three-man positions that circled the command post of the Lieutenant (or Sargeant Lewis when we had no Lieutenant);Â  the medic, and the Lieutenant’s RTO.Â  Right after a resupply, we carried on average about 90 pounds on our back–water, C-rations, M60 machine gun ammo, claymore mines, grenades, C4 explosives, and 10-20 clips of M16 ammo. Â We sporadically would return to artillery Firebase Libby for a few days of guarding its perimeter, getting mail, getting a cold-water shower, and serving as quick-reaction force.

From July to November we had about seven or eight firefights-mostly platoon-level encounters as we ran across NVA/VC jungle bases. Â Firefights sometimes lasted a few minutes, and sometimes maybe 15 minutes to a half hour. As we tromped through the jungle, we suffered a lot of boredom interrupted by short bouts of equal parts excitement and terror.

My time in the field ended on November 28th, the day after Thanksgiving. Â We had been ambushed during re-supply on Thanksgiving, with Dixon and Rabenda seriously wounded and Ring with a wound to his wrist and an FNG whose name I cannot remember being wounded with a round in his leg. The next day we set up an ambush in a coffee plantation. Â A platoon of NVA walked into it, we killed a couple of NVA, but Cook and I were wounded.

Below are some photos with commentary. Â My feelings about all that happened that year are too complicated to write down here, but my feelings about the people in my platoon are pretty simple: Â we really were a “band of brothers,” who risked our lives for each other and learned to live together and help each other in really awful conditions.

Here is the link to the book I wrote that fills in the details: 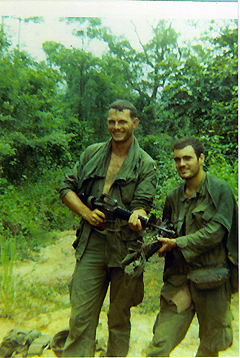 Curtis Dewitt and me (Driskill). Curtis was (and is now) from a farm in South Carolina, and came into country about the same time I did. We were in the same squad. Curtis has always entertained us with stories about his relationships with farm animals. 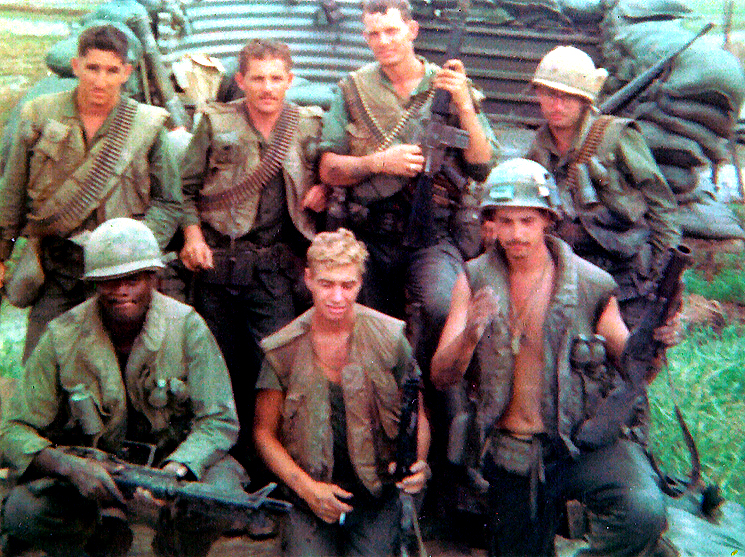 From left to right, top line first: Harvey Sixkiller, Sgt. Lewis, Curtis Dewitt, Jerry Morehead; Nelson Bunch aka “Stinger,” (we came into the Company together-he was from Harlem, and proud of it), unknown to me, then “Tiny” Glinka (obviously not tiny, he re-upped after hearing how his wife was cheating on him). 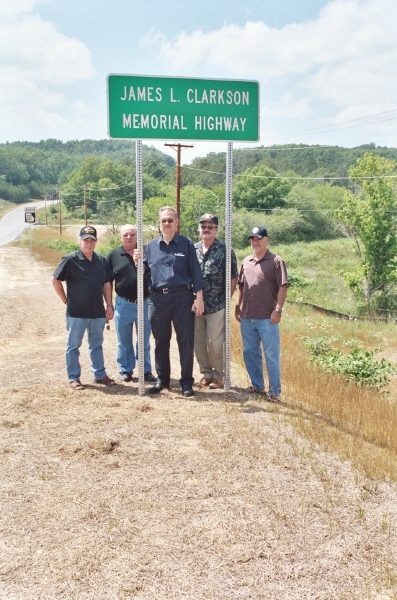 In 2007 Third Platoon had a reunion in Pigeon Forge TN, that coincided with a memorial service for Clarkson in his home county in Northwest Georgia. Â Clarkson, only child, was KIA in early December in an ambush. From left to right: Reid Mendenhall, Bill Preston, Doc Clary (our medic, and now also an MD), Dan Weirich, and yours truly. The county named this highway in his honor.

Below, General Bond visits me in the 24th Evac hospital. He probably wanted a little advice on tactics. Â I took a round through my chest on November 28th. We had set up an ambush in a coffee plantation, and Cook and I were the bottom of the “L.” An NVA column came walking down the road we were facing, Cook opened up with his ’60, blew the first guy off his feet, but the next guy flattened out and hit us with an RPG round, and I also caught a rifle round from some NVA farther down their column. Cook and I were all that was left of our squad because we had been ambushed the day before (Thanksgiving) and Rabenda, Dickson, Ring, and an FNG I cannot remember were all wounded. Â Bond later was shot by a sniper-the only general in the VN war to die in combat. 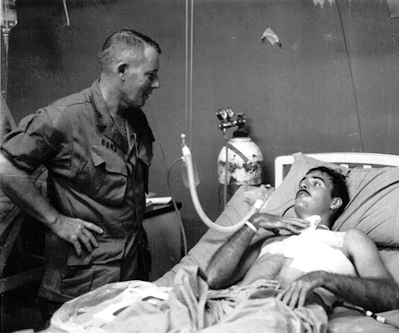 Clarkson was KIA 3 days later. Someone later told me Jackson was shot the day after me in the neck. Â Not a good time for third platoon. 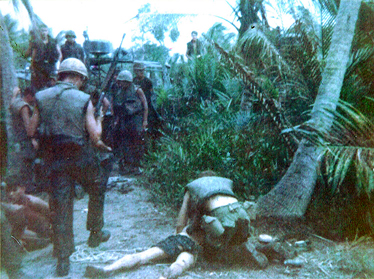 Aid and comfort to a wounded VC. We were still in the Delta (flak jackets). Â I believe Doc helped the wounded guy remember where he had thrown his weapons cache as he stopped the bleeding. 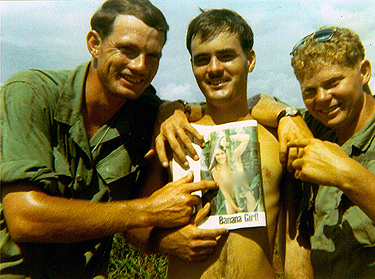 Dewitt, Gallion and myself with the most popular magazine in the Nam. Â Gallion was a great squad leader. He came from a little town in the Ozarks. 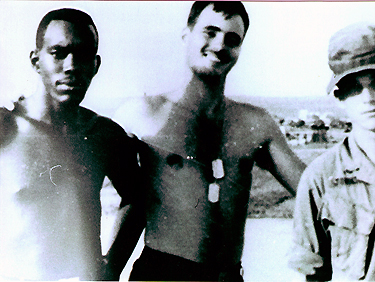 Jackson, Dickson, and me. 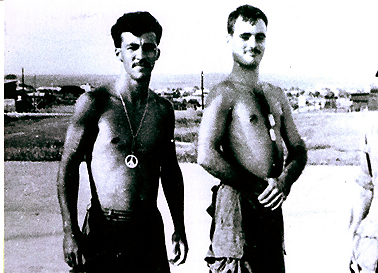 Woody and me. Â Woody was pretty much an FNG to me, Love the peace sign. 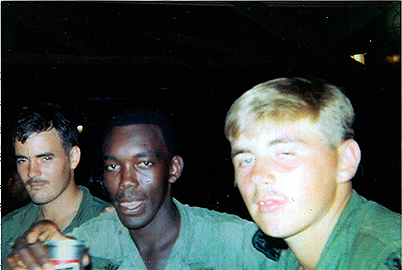 Jackson, Rabenda, and me at the EM club at Brigade Main Base-my one and only stand-down.Â  The company had another one when they moved from the Delta to the jungle, but I was in the hospital at Cam Rahn bay then. 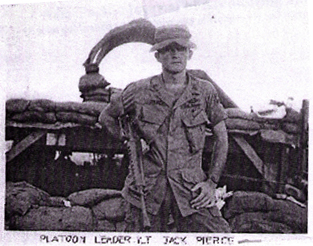 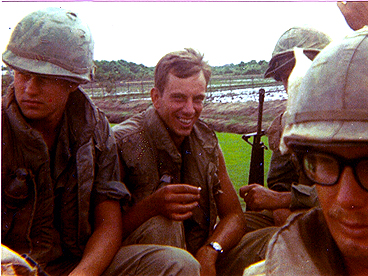 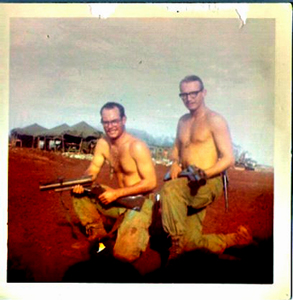 Clark Ferrell and the Jack Mormon. Clark was shot when Gross’s squad found a base camp. Clark was a college grad, and seemed lots older to me. A bullet went in his neck and came out lower down his back–it was a sucking chest wound. Â His wound got him back to the states. I still have the Buck knife he got sent to me-it followed me to Walter Reed. 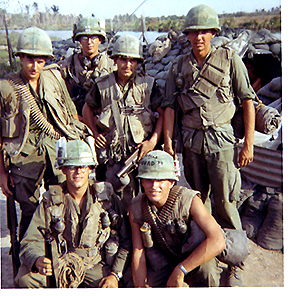 “Infantry pose.” This might have been taken at Libby (sandbagged bunker in the back suggests it to me). Mike Gross is the skinny guy standing on the right. Â Mike got wounded twice-blown off an APC by a mine (we were in Cam Rhan Bay Â hospital together), then grazed by Claymore pellets when Farrell was shot. His second wound got him a job in the rear. He deservedly received an ARCOM with V for valor for his actions in our first jungle firefight. 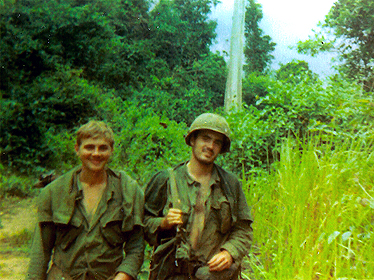 This is me with Jesse Rabenda. Some combination of Jesse, Dicky Dixon, Richard Jackson, Stinger, Lloyd Cook, Gallion, and myself were usually set up in one of our three-man perimeter outposts. These people more or less comprised my squad. 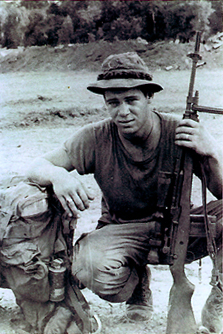 This is Reid Mendenhall, carrying a sniper rifle. Reid lived through the Cambodian trip–human wave attacks and beaucoup NVA.

In October, I was on R and R in Bangkok when a Korean company came by and took photos and made a “yearbook” kind of thing–I guess while the company was in Libby. Below is the pictures I have from this. 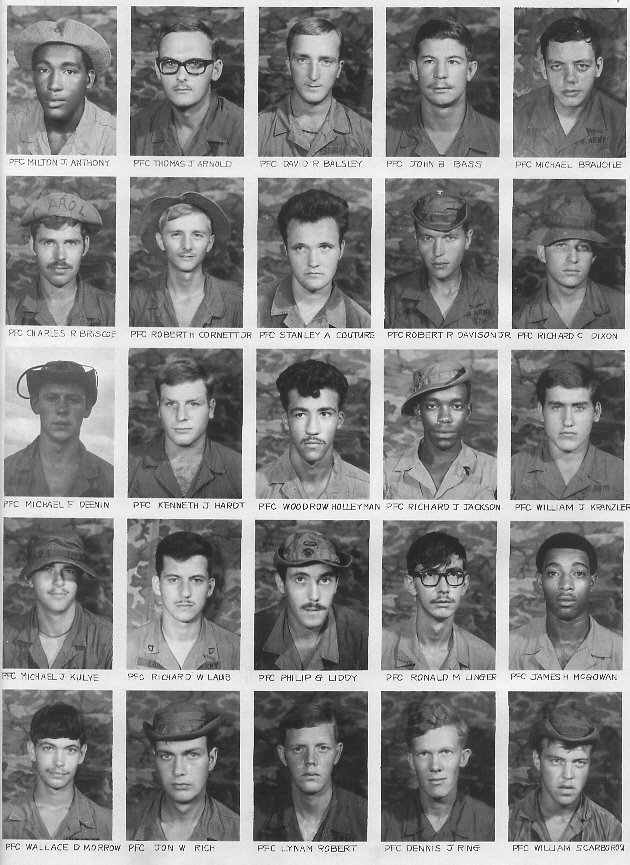 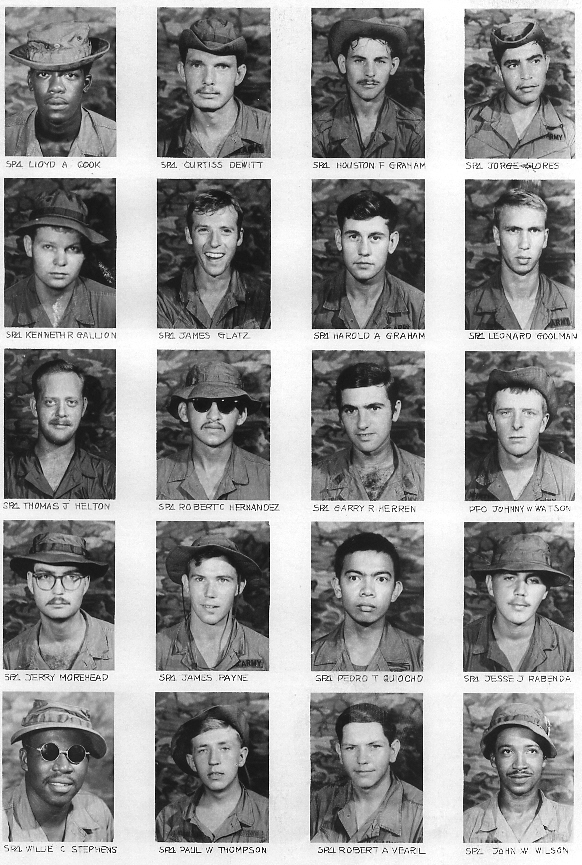 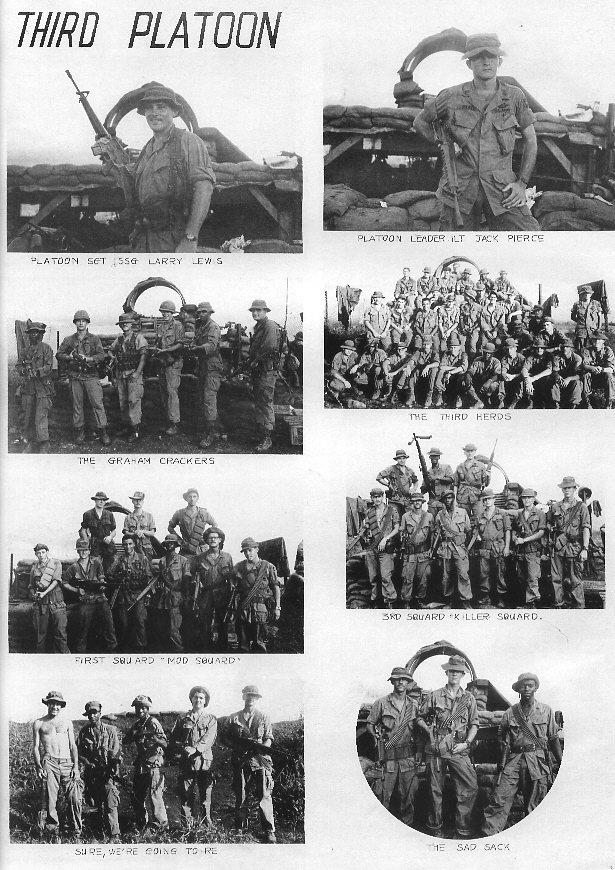