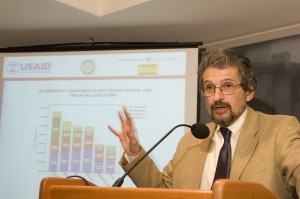 Mitchell A. Seligson isÂ  Centennial Professor Emeritus and Research Professor of Political Science at Vanderbilt University and Founder and Senior Advisor of the Latin American Public Opinion Project (LAPOP). He is an elected member of the General Assembly of the Inter-American Institute of Human Rights, and has been a Fulbright Senior Faculty Fellow, and is an appointed member of the Organization of American States (OAS) Advisory Board of Inter-American Program on Education for Democratic Values and Practices, an appointed member (2007-present) of the Organization of American States Network of Democracy Practitioners. He has been awarded a Danforth Foundation Kent Fellow, a Social Science Research Council Foreign Area Fellowship, and was awarded a Fulbright-Hayes Fellowship, a Grace L. Doherty Latin American Fellowship by Princeton University and an International Fellowship from the Organization of American States. He was awarded the James A. Robertson Memorial Prize for the best paper in Latin American history, the Hoover Institution Annual Prize for the Best Scholarly Article on Latin America, and the Best Paper Award (Pi Sigma Alpha) at the Annual Meeting of the Southwestern Political Science Association. Seligson is a founding member of the International Advisory Board (IAB) of the AfroBarometer.Â  He has been appointed to the Academic Board (Consejo AcadÃ©mico) of the research institute, âMexico, las AmÃ©ricas y el Mundo,â at CIDE Mexico (Centro de InvestigaciÃ³n y Docencia EconÃ³micas A.C.), Â and is an appointed member of the World Bank Technical Expert Group (TEC) on Actionable Governance Indicators (AGI). He served on the National Academy of Sciences panel studying the impact of foreign assistance and democracy, and co-authored their book, Improving Democracy Assistance: Building Knowledge through Evaluations and Research, (Washington, DC: The National Academies Press, 2008). He has served on the editorial board of the Latin American Research Review and is currently on the editorial boards of the European Political Science Review, Comparative Political Studies, the Journal of Democracy en EspaÃ±ol, ROP: Revista OpiniÃ£o PÃºblica, the Political Analysis series, Palgrave Macmillan, Estudios Interdisciplinarios de AmÃ©rica Latina y el Caribe and theÂ  Delaware Review of Latin American Studies (DeRLAS). He has published more than 200 articles, monographs and books. His most recent books are The Legitimacy Puzzle in Latin America: Democracy and Political Support in Eight Nations (Cambridge University Press, 2009), and Development and Underdevelopment, the Political Economy of Global Inequality, Fifth edition, 2014.Â  He has chaired or co-chaired over 35 Ph.D. dissertations.