Sri Lanka falls into the IPCCâs category ofÂ vulnerable small island nations under serious threat from various climate change impacts including droughts. Temperature data analyses by Basnayake et al. (2004) and Chandrapala et al (1996) have shown significant increasing trends during recent decades and mean annual precipitation has also decreased during the same period. Against the backdrop of these changing climatic conditions, Sri Lanka is exposed to a tremendous range of economic, socio-political and cultural circumstances that are common to agricultural nations in the South and Southeast Asia. The Mahaweli River Watershed is a microcosm of these stresses as it serves as a water resource for irrigation, hydropower generation, and drinking water supply via a series of dams and reservoirs in the mountains. The MRW is also the center of an ongoing national development program initiated in the 1970s that has relocated 300,000 landless families from the densely populated wet zone to the dry zone, occupying 510 sq.km of government land in MWR. 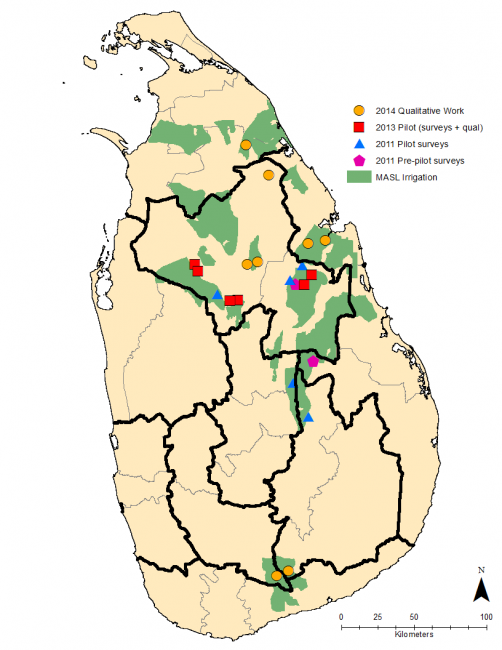 Sri Lanka scores relatively highly on theÂ Human Development Index, having a well-educated population, a life expectancy of almost 75 years, and a growing economy. Despite this, the country faces several continuing development challenges. Roughly one-third of its population is engaged in agriculture; in rural districts like Anuradhapura, over 60% of the population is engaged in agriculture. Sri Lankaâs dependence on agriculture makes it particularly vulnerable to climate change. Given that much of the countryâs population and infrastructure are located in coastal areas, most climate change-related adaptation planning and investment has focused on the consequences of sea level rise.Â  However, the interior of the country, where a great deal of agriculture takes place, is also vulnerable to negative impacts caused or exacerbated by climate change.

Our research is situated within the dry zone of Sri Lanka. We have selected this region because of its significance as the predominant rice growing region of the country. The dry zone encompasses 75% of the land area of Sri Lanka yet receives less than 40% of total rainfall, most of which falls between the monsoon season between October and March. During the dry season, and when rainfall is insufficient agriculture in this âdry zone,â crop production is buffered by an extensive irrigation system that serves over 3,600 square kilometers. Â There are two primary variants of this irrigation system.Â  The first system, categorized as âminor,â has been practiced in Sri Lanka for more than two thousand years.Â  It involves storing water in tanks in each village (really a berm-enclosed large pond or small lake) during the wet times and releasing that water in drier times.Â  Each village manages its tanks by themselves, with some help from the government.Â  The second system, categorized as âmajor,â uses canals and tunnels to transport water from large reservoirs in the countryâs wet highlands to paddy fields.Â  Parts of this major irrigation system have been in place for hundreds of years, but the majority of it was constructed in the 20th century; renovations and extensions are ongoing.Â  The central government builds and manages the large infrastructure of this system, while local farmer committees work together to manage and maintain field-level distribution systems.

Both types of Â irrigation system are vulnerable to climate change due to shifting rainfall patterns and increasing temperatures. Temperatures in Sri Lanka have already increased about 1Â°C over the past 50 years, and they are expected to continue to rise. While projections for rainfall are less certain, higher temperatures necessarily mean higher levels of evapotranspiration, suggesting that Sri Lanka will likely have less water in the future, particularly in areas which are dependent on stored water.Â  In addition, climate change has other impacts: farmers tell us that they are experiencing changes in the onset and intensity of monsoon rains which make it harder for them to effectively manage their production and maximize yields.