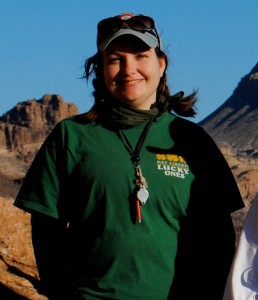 Dr. Lily Claiborne (Principal Investigator) is a senior lecturer in Earth & Environmental Sciences at Vanderbilt University.  As an undergraduate, she started out as an English major taking geology to fill a science requirement, but she fell in love with learning to tell the stories of the Earth’s history (and volcanic systems, especially) by reading the rock record.  Her experiences in the field as an undergraduate ﻿(in SW Florida, the Appalachians Mountains, the Cumberland Plateau of TN, and the Colorado Plateau of NM, AZ) were some of the most important, fun, and enlightening of her life, and sparked her desire to provide those same kinds of formative experiences for other students.  Fifteen years (and several pairs of boots)  later, she’s excited to take students into the desert southwest to study volcanic rocks for this REU.  Although interested in nature and earth systems in general, her research interests are focused on the connections between plutonic and volcanic systems, the magmatic ‘plumbing’ systems of volcanoes, timescales of magmatic/volcanic processes, and how conditions and processes in these systems are recorded in minerals and rocks.  To answer these kinds of questions, she’s focused on Mount St. Helens, WA and on Miocene-aged plutonic and volcanic deposits in the Colorado River Extensional Corridor, the location of this study. 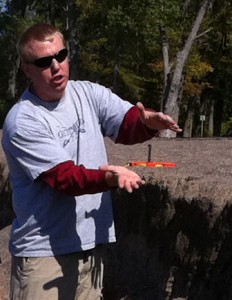 Dr. Nicholas Lang (Principal Investigator) is an assistant professor in the Geology Department at Mercyhurst University. He has conducted research involving both extensive field work and remotely sensed data. His remote sensing work has employed visible and thermal imagery and spectroscopic data to constrain the composition of lava flows on various parts of the Martian surface.  He has also used radar imagery to conduct structural mapping of the surface of Venus. Dr. Lang teaches six different courses including classes for non-science majors as well as lower and upper level geology major courses and has led students on four extensive field trips (two to the Mojave Desert). He also serves as academic advisor to all geology majors as well as students entering Mercyhurst University as undeclared majors. Dr. Lang was inspired as a field researcher early on by undergraduate experience in a Keck program. 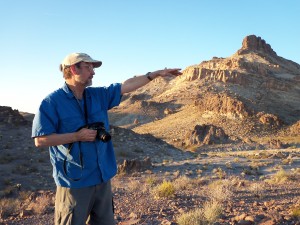 Over the last 36 years, Dr. Calvin Miller (Co-Leader) is a professor of Earth & Environmental Sciences at Vanderbilt University.  He has worked with more than 80 undergraduate and graduate students on research projects, a majority of them in the Colorado River region of Arizona, Nevada, and California.  Projects have dealt with a wide array of fields including structural geology and regional tectonics, metamorphic petrology, and the sedimentary record, but they have primarily focused on magmatism.  His students have also carried out projects in the southern Appalachians and at Mount St. Helens, and they are currently investigating silicic magmatism in Iceland.  The “Before and After a Supereruption” REU connects closely with his geoscience passions: connections between plutons and volcanoes, origins of supereruptions, geological evolution of the Colorado River region, and helping students to embrace, enjoy, and excel at research. 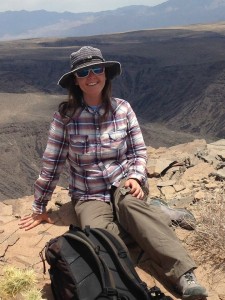 Dr. Susanne McDowell (Co-Leader) is an Assistant Professor of Geology at Hanover College.  She completed her undergraduate degree at Vanderbilt, her M.S. degree (with a focus on igneous petrology and geochemistry) from UNC – Chapel Hill in 2004 and her PhD from Vanderbilt University in 2014, completing a field-based, multi-faceted study of magmatism in the southern Black Mountains.  She also worked on a second project on intrusive and related volcanic rocks in Brazil under the direction of Professor Guil Gualda. Susanne is as passionate about teaching as she is about her research. She has taught at the college level for more than 10 years and has experience in both on-ground and online learning settings. She is particularly interested in mentoring undergraduate researchers.