In the spring semester before traveling to London for this Maymester, I took Dr. Lovensheimer’s “The History and Culture of Musical Theatre in America” course in which we walked through the evolution of musical theatre. We watched three musicals in full during the semester, and one of them was a production of Stephen Sondheim’s Follies. I enjoyed the production in the class, but I didn’t walk away with any strong feelings towards the piece, positive or negative. As someone in her twenties, I found that I didn’t really connect with the content because I could not relate to the characters experiencing midlife crises. However, when I saw that Follies was on our London itinerary, I was excited to see the live remount at the National’s Olivier Theatre and see how it compared to the one I had previously seen. What I did not realize was that this live production was, in fact, the exact same production we had watched in class, filmed as part of the National Theatre Live programming! I first realized this when the class took the behind-the-scenes tour of the National, and we walked into the empty theatre during mic check. I immediately recognized the large “Follies” light up sign on the stage, and at first I was a little disappointed. I had hoped to see a different interpretation of the show, and maybe see if I connected with that version more. We moved on in the tour, but I was still excited to see Follies because I love musicals, I love Sondheim, and overall it had been a good production. I also reminded myself that these would probably not be the same actors either, so perhaps that would affect my opinion of the piece. 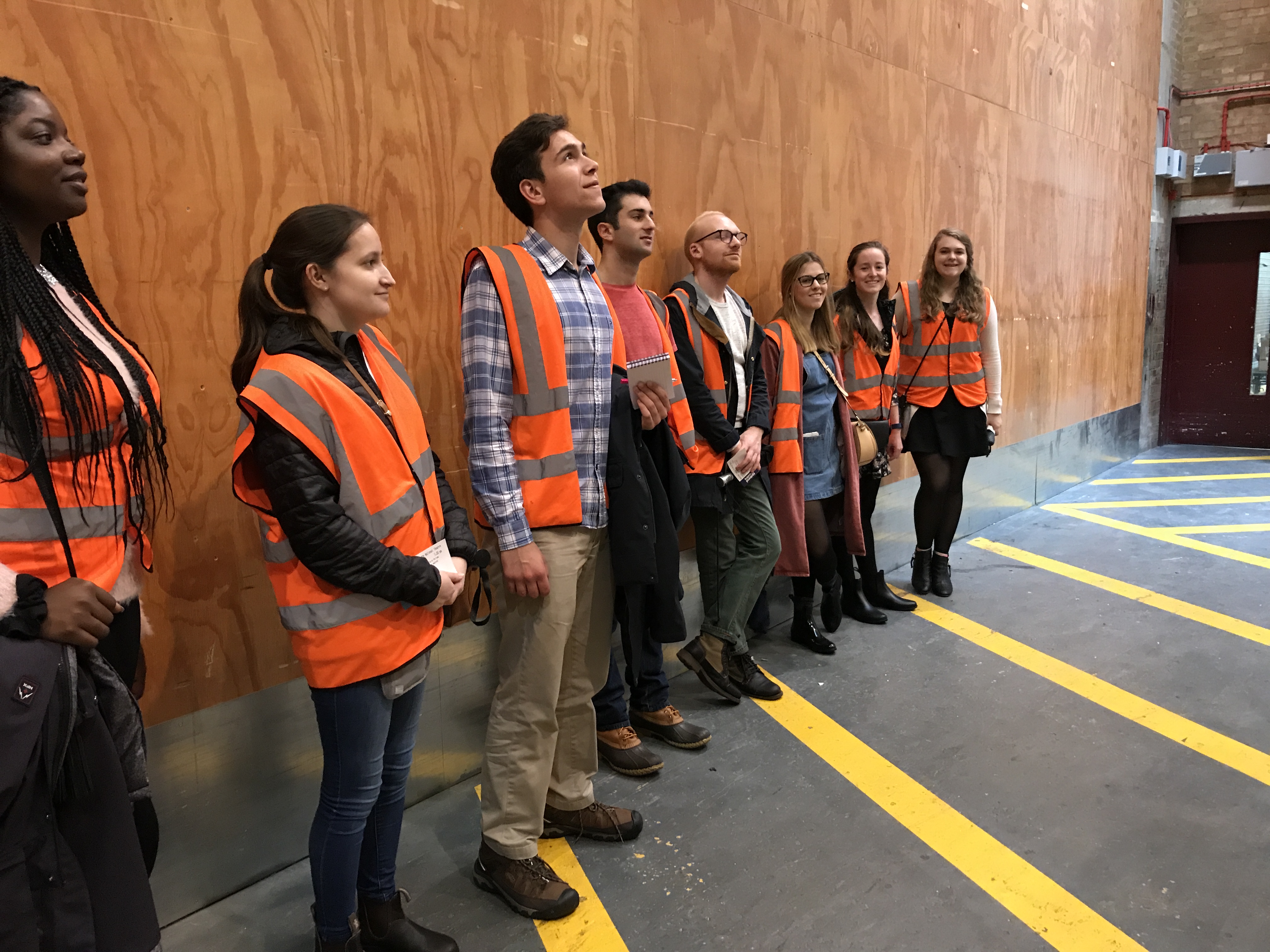 Backstage at the National, before Follies.

After seeing the amazing tour of the National Theatre, and spending time in the space, my anticipation for the show began to grow, especially because of the pre-show energy of the audience. Theatre-goers were lined up by the theatre doors, waiting to be let into their seats, clutching their programs and tickets. I felt the same butterfly feeling in my stomach that I get when in line for a ride at Disneyland, and I realized I had forgotten what a difference the atmosphere of being at a theatre makes.

The lights dimmed, the music swelled, and the first ghost of a dancer appeared on stage and I was immediately thrilled and awestruck. The vastness of this stage had not been captured in the film version, and the gorgeous lighting design was so much more powerful in person. I sat in awe as the ghosts danced throughout the stage, below the twinkling lights, and I felt transported into a place of magic. I was transfixed by the glow and did not even realize that the first principal actors had come out on stage, and as I looked closer, I realized that these were in fact, the same actors as well! Two of the four lead characters, Ben and Sally, were played by different actors than the version I watched, but everyone else was the same, down to all of the supporting characters. In short, my mind was blown. 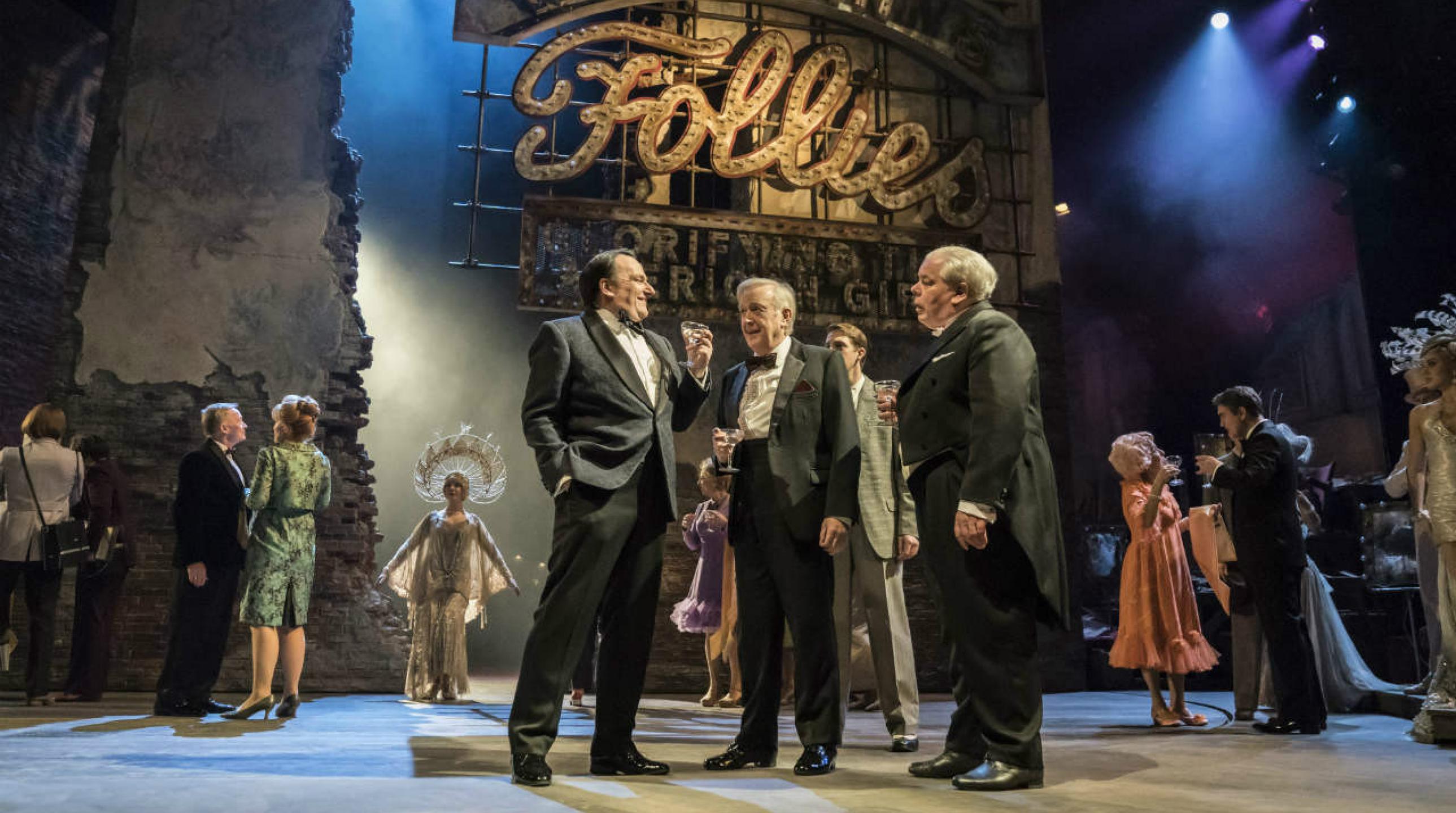 The vastness of the stage, with the light up sign in the background. Photo by Johan Persson.

It is hard to describe the confusion this caused for my brain. I both recognized it, and knew what was coming next, what the costume would be like, what choreography they would perform, but it was also such an incredibly different experience. To have seen an actor performing a number in the recorded version, and then get to see that same actor perform that same song, but live on an enormous stage, with an enraptured audience, is like seeing a black and white piece restored to color for the first time. It’s recognizable, familiar, and predictable, but at the same time, so fresh, so new, and so unpredictable! Because that is the beauty of live theatre: while these actors have their blocking, their choreography, and they have rehearsed their songs in a certain way, they also have an immense amount of freedom to play with. So while some lines or moves were executed in the exact same way I had seen previously, other moments took these lines or movements in a completely different direction.

On top of that, effects that seemed simply pretty in the filmed version were stunning on the stage. The costumes sparkled and twinkled much more against the lights than they had on film, and the stage looked infinitely larger. Many times throughout the film, the camera would be shot close up, on an actor’s face, in order to capture their emotion. However, this greatly limited the complexity of this production, because it didn’t show the ensemble members moving around on the opposite side of the stage, the ghosts of the main characters looming behind them, or the shapes and shadows that the lighting design created on the enormous set. I understand why the film made this choice, but it greatly limited the experience for me, because it took away the choice theatre-goers are given. In a live theatre, you can choose to focus your eye on the character speaking, or the character in the background. You can even choose to simply admire the set in that moment, to watch the orchestra, or even look around at the audience. So especially for a huge production like Follies, in which so much is happening at every point on the stage at one time, you miss so much if you choose to just focus on one point in time. 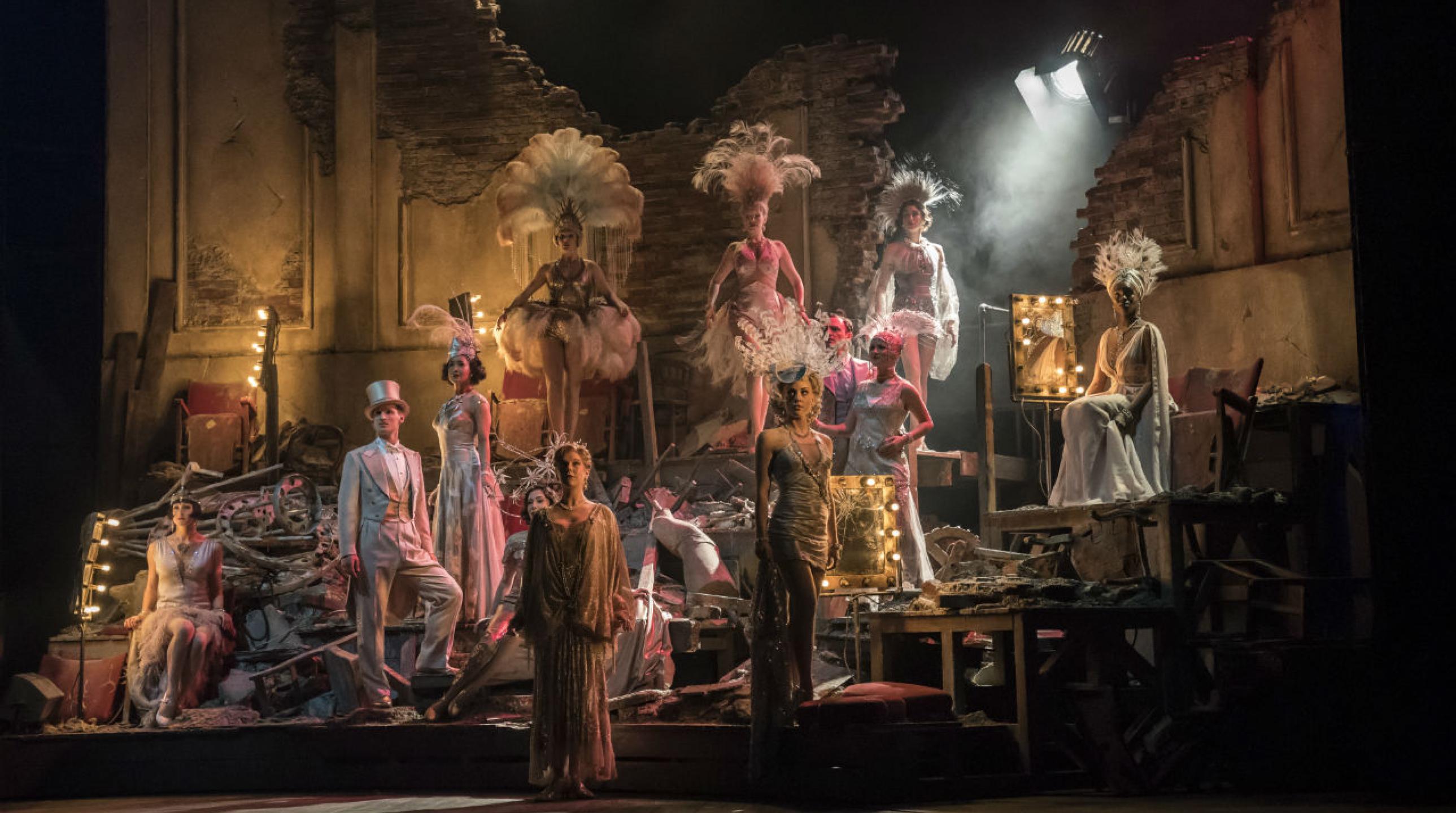 The ghosts of Follies. Photo by Johan Persson.

Needless to say, I was enthralled with this live performance of Follies, and completely in love with the show before we were even halfway through the piece. The experience I had of seeing it live after seeing it on film showcased the importance of live theatre and how drastically it can change your opinion of a piece. Therefore, while filmed versions of musicals are great because they provide content to a greater audience, especially to those that cannot afford to see theatre live, I truly believe that nothing beats the atmosphere of a live musical.