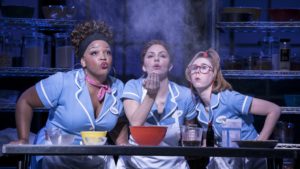 Waitress was by far the best viewing experience I had in London. From the moment I entered the theater, every detail brought me into the sweet, warm world of the show. The smell of fresh baked apple pie greeted me at the door. The curtain was painted to look like a pie tray and there were revolving pie racks on either side of the stage. The seats were comfortable and spacious, in stark contrast to the knee-bruising pews, from Fiddler on the Roof the night before. The whole theater was beautiful, adorned with red velvet and art deco paintings. Before a single note was sung, I knew I would enjoy this show.
The only names I recognized on the Marquee were Katherine McPhee and Jack McBrayer. They were truly the standout performances of the musical, but for opposite reasons.
Katherine McPhee has a beautiful voice. I has such power and range. It was a joy to hear her sing. Her rendition of “Used to be Mine” was breathtaking. The applause after the song was so loud and lasted so long, it rivaled the applause at the end of the show. People love her version of the show’s emotional climax so much that she is releasing it as a single. However, McPhee is not a phenomenal actress. She tends to play her characters very monotone and reserved. Before seeing Waitress, I had seen her on the tv show Smash and hated her interpretation of Karen Cartwright, a budding broadway star. Her performance in Smash was worse than Kristen Stewart in Twilight. It was lifeless and boring. It made me dislike her character and her as an actress. Despite my initial aversion to McPhee, I was pleasantly surprised. Surprisingly, her style of acting worked for the character. As Jenna, the pregnant waitress with a passion for baking and a deep desire to break free of the cycle of domestic abuse, McPhee succeeded in garnering sympathy for the characters plight and managed to show a small semblance of character development. She wasn’t sullen, she was just shy. She wasn’t boring, she was just reserved. By the end of the show I was deeply sympathetic for her character. In short, she was able to successfully carry the show. The other actors charisma more than compensated for McPhee’s subpar acting.

I also recognized Jack McBrayer from television. However, in contrast to McPhee I loved McBrayer on the small screen. He plays the always cheerful, always polite Kenneth Parcell in 30 Rock. He also voices the shy and annoyingly helpful Fix It Felix in Disney’s Wreck It Ralph. His character in Waitress, Ogie Anhorn, does not stray from his type cast of silly, cute characters. After the show Alex and I were discussing how famous McBrayer is and how he could be doing something with more name recognition that playing a bit part in a West End musical. McBrayer’s performance just exuded so much joy that I was genuinely convinced that McBrayer genuinely wants to be there. There is no other explanation for me. Everything McBrayer does, radiates happiness. His portrayal of the quirky, hopeless romantic is so lovable and endearing. McBrayer is not a wonderful singer. He hits most of his notes but his voice is just average. Alex had some complaints with a West End musical casting someone, who was clearly not a trained singer, to play a role that has two solos. I think McBrayer more than makes up for his lack of vocal talent with his bounds of charisma.

McBrayer’s performance was emblematic of tone of the overall show.
Waitress was happy and fun. All of the music is written by peppy pop star, Sara Bareilles. It was refreshingly lighthearted, despite tackling some dark topics. It follows the story of waitress, Jenna, as she navigates an unwanted pregnancy while married to an emotionally and physically abusive man, Earl. She begins an affair with her gynecologist, who is also married. Eventually Jenna delivers her baby and is able to muster up the courage to leave her husband and open her own pie shop. This class saw so many depressing shows about important but disheartening subjects. Every night it was a barrage of sexism, racism, classism, sexual assault, immigration and capitalism. All of these shows were attempting and mostly succeeding in sending a poignant message about the bleak state of the world. Nevertheless, a lot of the shows bummed me out. I’m so thankful for being exposed to these pieces of art but, it became emotionally exhausting. However, Waitress was able to tell an absolutely heartbreaking story about motherhood and domestic abuse and infidelity, that was still fun to watch. I think a lot of theater artists believe that sad=deep and happy=superficial. But I disagree and Waitress disagreed.