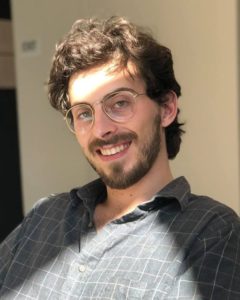 Thomas Huebner is a doctoral student in the French program at Vanderbilt University. Prior to his coming to Vanderbilt, he obtained a Bachelors of Arts, double majoring in French Language & Literature and English at The University of Maryland, College Park. During his undergraduate career, Thomas studied abroad at l’Institut Linguistique Adenet in Montpellier, France and later at l’Université Nice- Sophia Antipolis in Nice, France.

Following the completion of his undergraduate studies, he worked in tandem with Central Piedmont Community College in Charlotte, North Carolina to help underserved communities with ESL and DRE (Developmental Reading and English). In fall 2018, Thomas also worked with Davidson College to create, translate, and facilitate a public bilingual MOOC (Massive Open Online Course) on comparative gentrification and displacement in Charlotte, NC and Paris, France. Feel free to check it out at Belong/Appartenir: Community, Race, and Space in U.S. and France.

His primary research interests reside in Postcolonial Francophone Literature, questions of origin and race in both d’outre-mer and metropolitan France, and the consequences of the Parisian metropole as the gatekeeper to French identity.