Stories from the Natural World: New Book Trailer for Between the Rocks and the Stars 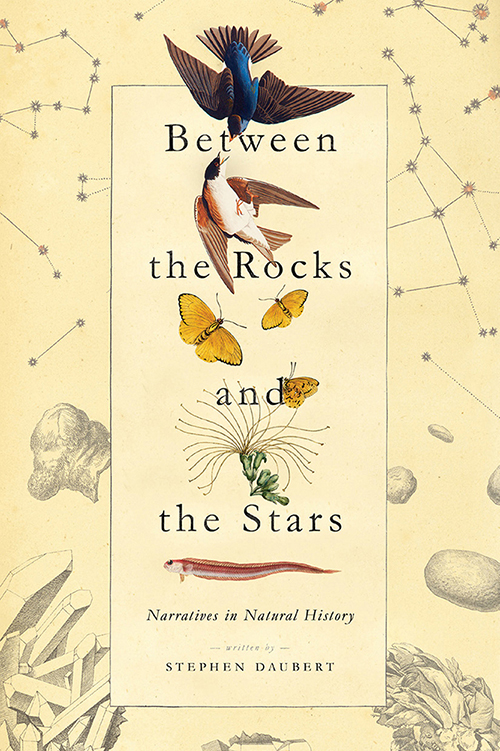 As a part of the University Press Week 2020 blog tour, Vanderbilt UP is excited to unveil a new book trailer for Between the Rocks and the Stars: Narratives in Natural History.

Between the Rocks and the Stars dives deep into the relationships that shape the natural world. Author Stephen Daubert offers accessible stories from the wild, taking readers where they cannot go—out into space, back in time, deep under the ocean, down to microscopic scales, and out onto the geologic overview. Daubert, a retired career scientist at UC Davis, demonstrates the power of telling scientific stories in a way that conveys how engaging, beautiful, and necessary they are.

The morning was placid enough, but the juveniles in the raft of gulls were still growing agitated. Stippled in their grays and browns, they were calling back and forth.

They were all sitting in the sun, rolling with the swells on the open ocean. But with their heads held high, they could not easily see what was going on below. The juveniles felt like sitting ducks, vulnerable to attack from beneath. And now the water was brightening all around—something had seen them there on the surface and was rising up from underneath.

Soon the yearling birds leapt squawking into the sky and headed for the horizon. The adults were not as flustered. They had not seen the torpedo shapes of the predators that threaten floating birds. Something was definitely coming up toward them, but it was coming gradually.

As the water continued to brighten, they all finally kicked into the air. One by one, they banked into wide, circling turns. They cried out to each other, looking down from above on what was coming up from below.

The top of the rising pillar was a circle at least ten feet in diameter. The water sighed and ran off as the disk broke the surface. The parting waves revealed a huge, broad fish. The birds watched, keeping their distance above, calling back and forth, now and then. But the fish did not move. It just floated there as if it was dead—staring blankly up at the sun, inviting them to touch down.

So the inquisitive gulls descended. The birds were reminded of the firm ground of an island, though the nearest shore was miles away. One of the gulls off to the side put down its feet to slow its flight. Nothing happened.

The living island was a sunfish. After the example of their leader, the other gulls touched down. Walking around was like foraging across a beach. And the animal life to be found here was more accessible and more diverse than on most exposed reefs or sand bars.

And, to the birds’ excitement, all of these things were edible, and there for the taking. With the appearance of this sunfish, a promising day of foraging had presented itself out of the deep blue.