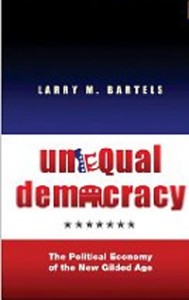 Unequal Democracy: The Political Economy of the New Gilded Age. Using a vast swath of data spanning the past six decades,Â Unequal Democracy debunks many myths about politics in contemporary America, using the widening gap between the rich and the poor to shed disturbing light on the workings of American democracy. Larry Bartels shows the gap between the rich and poor has increased greatly under Republican administrations and decreased slightly under Democrats, leaving America grossly unequal. This is not simply the result of economic forces, but the product of broad-reaching policy choices in a political system dominated by partisan ideologies and the interests of the wealthy.

Bartels demonstrates that elected officials respond to the views of affluent constituents but ignore the views of poor people. He shows that Republican presidents in particular have consistently produced much less income growth for middle-class and working-poor families than for affluent families, greatly increasing inequality. He provides revealing case studies of key policy shifts contributing to inequality, including the massive Bush tax cuts of 2001 and 2003 and the erosion of the minimum wage. Finally, he challenges conventional explanations for why many voters seem to vote against their own economic interests, contending that working-class voters have not been lured into the Republican camp by “values issues” like abortion and gay marriage, as commonly believed, but that Republican presidents have been remarkably successful in timing income growth to cater to short-sighted voters.

Campaign Reform: Insights and Evidence (ed., with Lynn Vavreck). What is wrong with American political campaigns? How could the campaign process be improved? This volume brings the expertise of leading political scientists to the public debate about campaign reform. These scholars probe the reality behind the conventional wisdom that nasty, vacuous campaigns dominated by big money and cynical media coverage are perverting our political process and alienating our citizenry. Some of their conclusions will be startling to campaigners and critics alike. For example, “attack” advertisements prove to be no more effective than self-promotional advertisements, but are more substantive. Indeed, candidates in their advertisements and speeches focus more on policy and less on strategy and process than any major news outlet, including the New York Times. The volume suggests that, as a result, prospective voters in 1996 knew more about the candidates’ issue positions than in any presidential election in decades, yet turnout and public faith in the electoral process continued to decline. For aspiring reformers, Bartels and his colleagues provide a bracing reality check. For students and scholars of electoral politics, political communication, and voting behavior, they provide an authoritative summary and interpretation of what we know about the nature and impact of political campaigns. The insights and evidence contained in this volume should be of interest to anyone concerned about the present state and future prospects of American electoral process. Other contributors are Bruce Buchanan, Tami Buhr, Ann Crigler, John G. Geer, Kathleen Hall Jamieson, Marion Just, Daron R. Shaw, and John Zaller. 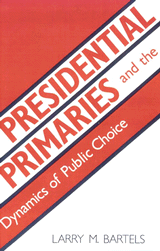 Presidential Primaries and the Dynamics of Public Choice. This innovative study blends sophisticated statistical analyses, campaign anecdotes, and penetrating political insight to produce a fascinating exploration of one of America’s most controversial political institutions–the process by which our major parties nominate candidates for the presidency. Larry Bartels focuses on the nature and impact of “momentum” in the contemporary nominating system. He describes the complex interconnections among primary election results, expectations, and subsequent primary results that have made it possible for candidates like Jimmy Carter, George Bush, and Gary Hart to emerge from relative obscurity into political prominence in recent nominating campaigns. In the course of his analysis, he addresses questions central to any understanding–or evaluation–of the modern nominating process. How do fundamental political predispositions influence the behavior of primary voters? How quickly does the public learn about new candidates? Under what circumstances will primary success itself generate subsequent primary success? And what are the psychological processes underlying this dynamic tendency?

Professor Bartels examines the likely consequences of some proposed alternatives to the current nominating process, including a regional primary system and a one-day national primary. Thus the work will be of interest to political activists, would-be reformers, and interested observers of the American political scene, as well as to students of public opinion, voting behavior, the news media, campaigns, and electoral institutions.

âCandidate Choice and the Dynamics of the Presidential Nominating Process.â
American Journal of Political Science 31:1 (February 1987), 1-30.

âThe Impact of Electioneering in the United States.â In David Butler and Austin Ranney,
eds., Electioneering: A Comparative Study of Continuity and Change. Oxford: Clarendon
Press, 1992, 244-277.

âLots of Opinion, Not Much Action: The Study of Mass Politics from Key to Kinder.â In
Edward D. Mansfield and Richard Sisson, eds., The Evolution of Political Knowledge:
Theory and Inquiry in American Politics. Columbus, OH: Ohio State University Press,
2004, 153-157.