Close to Paradise will create a working prototype of a 3D environment, based on the influential
Anglo-Norman text The Voyage of St. Brendan. The prototype will be designed to immerse
users in the medieval Anglo-Norman world (French-speaking English royal court circa
1120), facilitating learning the oral elements and working grammar of the now-extinct Anglo-Norman language within the context of this vibrant medieval society.

This functional prototype will consist of three (3) modules that illustrate clearly how the immersive, interactive approach of this project, based on game engine technology and game design principles, can teach Anglo-Norman French (and, by extension, other extinct or endangered languages) in a way that is far more engaging and effective than traditional textbook and abstract memorization methodologies. As a prototype application, the work produced by Close to Paradise is not intended for deployment in face-to-face or remote teaching contexts as a complete curriculum in Anglo-Norman French. It is intended to support grant applications to federal, state, and private funding sources which, if successful, would lead to the production of such a complete curriculum in the form of an immersive, interactive serious game application.

The three prototype modules are being produced in the Unity3d game engine, using Blender, Houdini, ZBrush, Maya, and other industry-standard 3D software, and published through webGL, a solution which allows interactive 3D game content to be played natively on the major web browsers (Chrome,Edge, Firefox, Safari). The prototype’s performance goal is smooth playability (30+ frames per second) on a moderately priced Chromebook ($250-$400). While the prototype itself is not intended for wide public or educational distribution, it is important to understand, design for, and hit these performance targets in the prototype phase, in order to minimize surprises in the move to full production.

The story opens with the user playing the role of a scribe, who has been invited by Queen Adeliza to translate the story of Brendan the Navigator from Latin into Anglo-Norman, used by the court in England.

In this module, users should:
● Learn about the important role of women as patrons of the arts.
● Learn specifically about the relationship between Queen Adeliza and the first known work written in Anglo-Norman, the Voyage of St. Brendan
● Understand how patronage and authorship functioned in medieval England/France circa 1120.
● Gain mastery of the game objectives and mechanics.
● Hear and see basic vocabulary about the goals of the game, but there is no specific linguistic goal for this module. 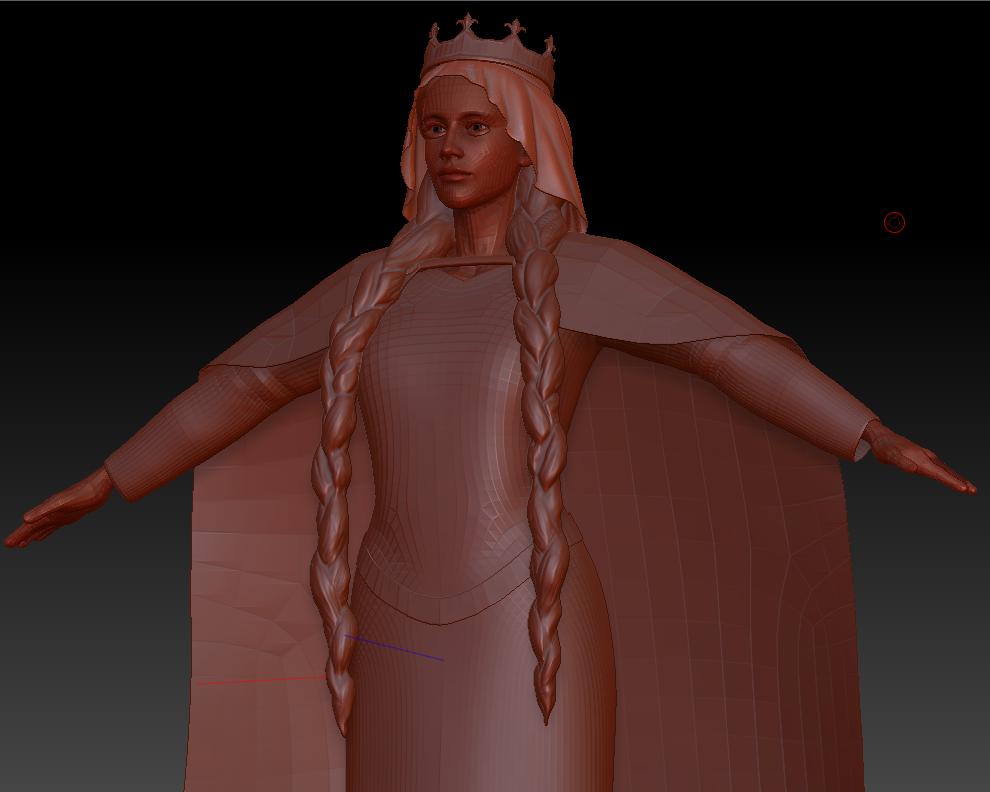 The user, who has been charged with putting the Latin Voyage of St. Brendan into Anglo-Norman for the Queen, goes to the scriptorium to begin work. The user meets a monk who runs the scriptorium. After getting set up to work in the scriptorium, the user must seek out the supplies needed for this work.

In this module, users should:
● See and understand the layout of a scriptorium – the desks, lighting, access to books, etc.
● Learn what is needed to create a medieval manuscript (parchment, pen, inks, dyes, model book)
● Learn the words for items in the space – scriptorium, desk, pen, ink, chair, etc.
● Learn how to acquire things needed, both by purchasing them (Where? With what money or barter?) or making them (How? What recipes or techniques are used to create dye and parchment?)
● Learn basic introductions (set phrases, “My name is …”, “Nice to meet you”, “Thank you”, “Goodbye”

Images from Module 2 – prototype of scriptorium (exterior, in cloister) 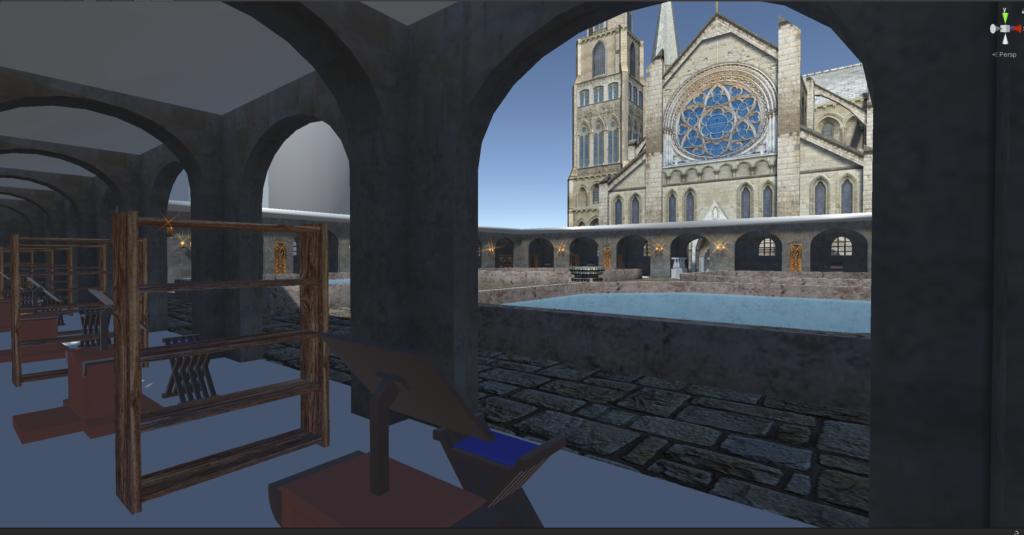 Now that the user knows what is needed to fulfill the Queen’s order, the user goes to a marketplace to procure the items. After successfully purchasing the materials, the user returns to the scriptorium to begin work on the manuscript.

In this module, the user should:
● Learn how medieval marketplaces functioned.
● Learn the vocabulary for the plants and materials purchased.
● Learn numbers 1-10.
● Learn the verbs “to buy”, “to sell”, “to have” in the present tense. 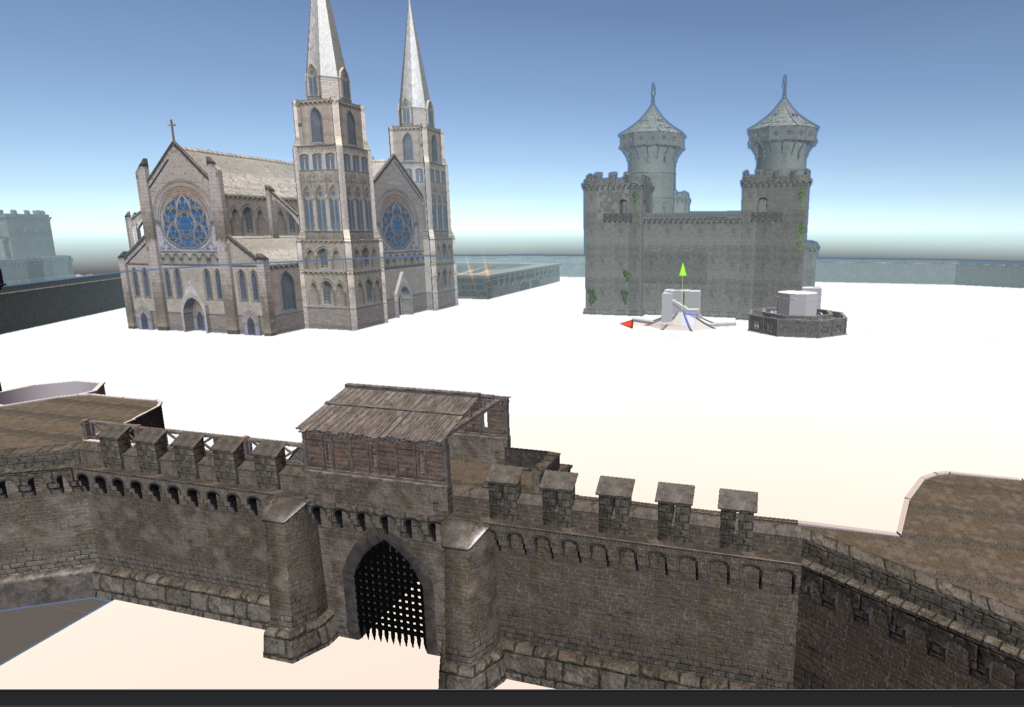 As mentioned above, Modules 1, 2, and 3 will provide the proof of concept to apply for larger development grants. The language-learning objectives are largely generic in that they could easily apply to other languages and cultures, with the caveat that there is an engagement with writing, which would not be appropriate in many times and places. Even in the Anglo-Norman court, the focus was on oral performance of literary and cultural works. Hence the stress of this project on oral, performative learning in an immersive environment, aspects frequently absent in the traditional, memorization-driven teaching methods of classical and medieval languages.

Lynn Ramey (Vanderbilt) and Jacob Abell (Colgate), will serve as content experts and provide high-level goals for the language and cultural learning aspects of the project. David Fredrick (Arkansas) will provide project management and oversee the design and implementation of the Close to Paradise application itself in the Tesseract Center for Game Design at the University of Arkansas. Working together with Tesseract staff, Ramey, Abell, and Fredrick will develop and iterate through the narrative and mechanics of the project, based on its learning goals.
Tesseract Center staff will update and adapt existing 3D art assets for the project for performance in webGL, as well as creating new 3D assets when necessary.

Tesseract Center staff will design and implement the coding architecture for the interactive narrative and mechanics of the project. This architecture will rely in part on the Lingua system for representing language structures developed at the University of Arkansas.