FiveThirtyEight has just published an article detailing some interesting trends in the marijuana market in Washington state. I found two statistics particularly striking.

First, the average retail price of a gram of flower has dropped 77 percent from July 2014 to December 2017. The average price is now $7.45 versus $32.48 when stores first opened in the state. Here is the chart from the article showing the price trend over time: 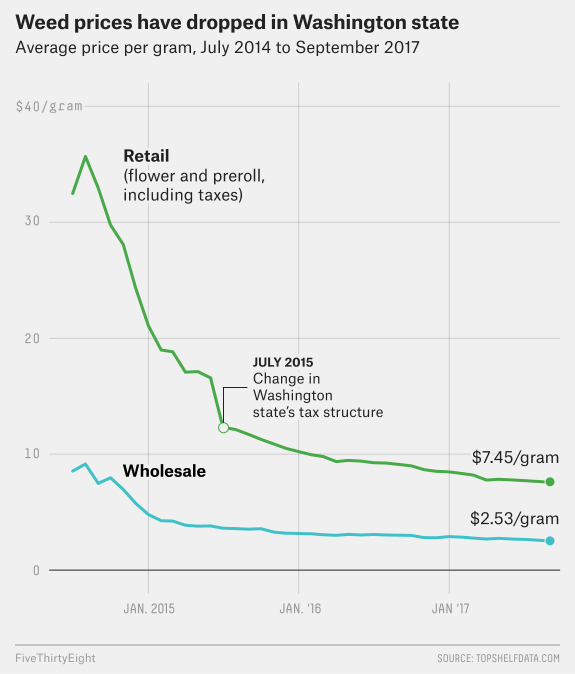 For reasons discussed in the book (pages 484-489) and in the article, the drop in price post-legalization is hardly surprising. Among other things, black market suppliers must pass on risk premiums, avoidance costs, and third party costs that suppliers of legal goods simply do not incur. For example, the producer of legal marijuana does not have to charge her customers a premium to compensate her for the risk of being punished by the state, nor does she have to employ costly methods of production (like growing in small batches) to help her avoid detection from the police.

Second, the Washington market shows some early signs of concentration. In particular, during the first 9 months of 2017, the 10 largest farms in Washington combined produced more than the 500 smallest farms combined. The former accounted for 17 percent of the state’s total harvest, whereas the latter accounted for just 13 percent. To be sure, that’s still a FAR cry from the levels of concentration seen in other, arguably comparable industries. For example, the four largest beer producers now control nearly 90 percent of the nation’s beer market (page 513, n.3). But the cost advantages of large-scale production – as well as the capital required for producing some popular marijuana products – may force further consolidation in the industry.