In February 2018, California regulators demanded that Weedmaps stop advertising marijuana shops that aren’t licensed by the state. The confrontation has raised some interesting legal issues concerning the liability of third parties (the subject of Chapters 11-14 of my book) which I discuss below. But first, let me provide some necessary background on Weedmaps and the dispute.

Among other things, Weedmaps hosts a website that helps marijuana buyers find marijuana sellers—the service is commonly described as the Yelp for marijuana stores. On the company’s website, users can type in an address and Weedmaps will generate a map showing the location of marijuana shops in the area. Here’s an example of a map depicting marijuana stores in Central LA: 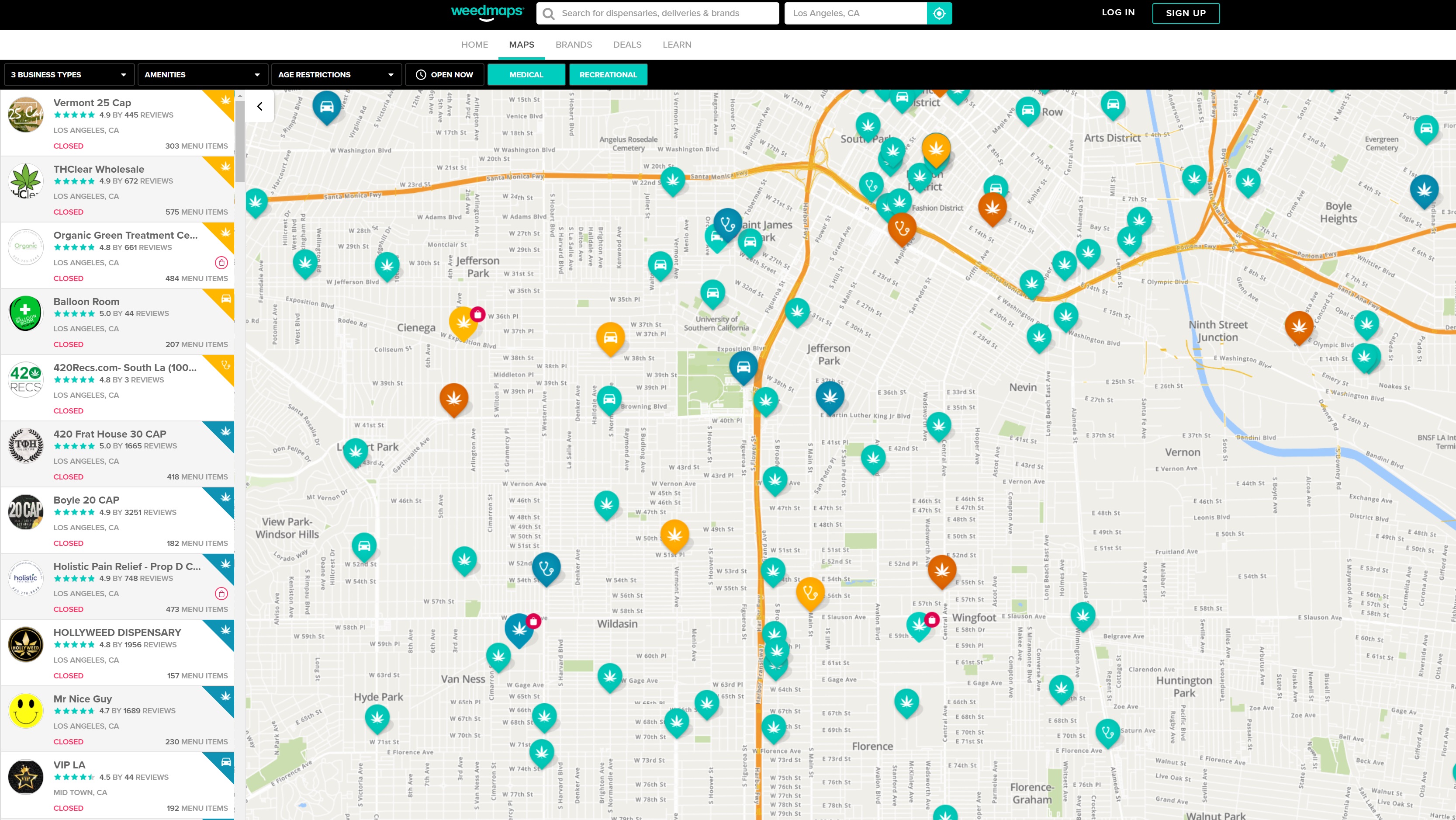 Although Weedmaps provides a basic listing for these stores for free, it charges stores a premium to be “featured” on the website and thus increase their visibility vis-à-vis their competitors.

It’s advertising like this that has caught the attention of California regulators. The state’s Bureau of Cannabis Control (BCC) isn’t bothered by marijuana advertising in general. Rather, the BCC is concerned because Weedmaps advertises both licensed and unlicensed marijuana stores on its website.* In a February cease and desist letter to the company, the BCC claimed that publishing advertisements from these unlawful businesses put Weedmaps in violation of state law:

“Pursuant to the provisions of the Medicinal and Adult-Use Cannabis Regulation and Safety Act (MAUCRSA), a valid state license from a state licensing authority is required to legally operate a commercial cannabis business within the State of California. This includes the retail sale and delivery of cannabis and cannabis products. Your website contains advertisements from persons offering cannabis and cannabis products for sale that are not licensed to conduct commercial cannabis activity; therefore, you are aiding and abetting in violations of state cannabis laws.”

A month later, in March 2018, Weedmaps responded to the BCC. See Weedmaps Response to BCC Mar 2018. The company’s full response is worth a read, but let me highlight two of the arguments it makes here.

Section 230 (c)(1) declares that “No provider or user of an interactive computer service shall be treated as the publisher or speaker of any information provided by another information content provider.” Section 230 does not bar enforcement of any “Federal criminal statute.” Id. at Section 230 (e)(1). However, Section 230 expressly preempts state laws that are “inconsistent” with the federal law. Id. at Section 230(e)(3). And federal courts have interpreted this express preemption provision to apply to state civil and criminal statutes. For example, in Backpage.com v. McKenna, a federal district court enjoined Washington state from punishing an online classified advertising service for publishing advertisements for commercial sex acts involving minors. Backpage.com, LLC v. McKenna, 881 F. Supp. 2d 1262 (W.D. Wash. 2012). The Electronic Frontier Foundation has a useful introduction to Section 230 and the caselaw interpreting the statute here.

There are some limits to the protection afforded by the federal law–among other things, it wouldn’t shield Weedmaps for any content the company itself provided that promoted unlicensed stores. Unfortunately, Weedmaps devoted only a sentence of its 3-page letter to the federal law. Based on the above information, however, it appears Weedmaps has a reasonable defense based on Section 230.

Of course, even if California is barred by Section 230 from taking legal action against Weedmaps, it could still go after the unlicensed suppliers who advertise on the website. Section 230 does not shield providers of information (in this case, the advertisers) from any state-imposed liability. Indeed, the state could even use the information found on Weedmaps to locate and build its case against unlicensed suppliers (a tactic that would presumably discourage those suppliers from advertising on Weedmaps in the first instance).

Second, in its response, Weedmaps appears to blame local governments for the problem of having so many unlicensed marijuana shops in California. Among other things, the company notes that roughly 85% of California localities do not yet license marijuana businesses in their jurisdictions (a prerequisite to getting a license from the BCC), and that many local governments that are licensing marijuana businesses are nonetheless imposing “crippling” taxes on them. (I discuss the issues surrounding marijuana localism is this article and in the book at pages 550-568.) Ultimately, Weedmaps suggests that

“[T]he only way to effectively deal with California’s 20-year history of cannabis legalization is to invite incumbent unlicensed operators into the light to be licensed. To provide them opportunities to operate a legally compliant business or to be shutdown. To enable small business owners that rely on this industry to feed their children or pay their mortgage an opportunity to survive. Additionally, the fate of these unlicensed operators is critical to the success of the licensed operators; over 90% of the cultivators and manufacturers in the state are unlicensed . . . and retailers are set to face crippling shortages in products in the coming months. Scrubbing the internet of the reality of unlicensed operators that have created thousands of jobs over the last 20 years does nothing to fix the underlying issues.”

Note that Weedmaps is not making a legal argument here. Rather, it’s trying to convince California lawmakers to change the state’s licensing policies and thereby authorize the legally questionable activities the company may be advertising.

As discussed in the book on pages 571-576, it’s not enough for the government to demonstrate that Weedmaps helped unlicensed companies violate state law or even that Weedmaps knew it was doing so. The government also needs to show that Weedmaps intended to help them, or to put it differently, that Weedmaps wanted those unlicensed firms to succeed (say, because it approved of their activities or stood to profit from them). Typically, this last element (desire) is the most difficult for the government to establish. After all, a defendant can always claim that it was indifferent to the success of the principal’s illegal venture since it would be paid regardless. However, that will be more difficult for Weedmaps to make such a claim, given the praise it appears to give unlicensed shops in its response (see above) and the fact that it views their success as critical to sustaining California’s marijuana industry—an industry on which Weedmaps’ own success arguably hinges (at least to some degree).

In short, Weedmaps might be guilty of aiding and abetting violations of California law; however, given Section 230, there may be nothing the state can do about it.

* The BCC alleged that Weedmaps also violated California law by failing to indicate the license number of marijuana stores that advertise on its site. Weedmaps contests that charge by claiming that the requirement only applies to licensees themselves (i.e, to marijuana stores) and not to the companies publishing the advertisements.