As discussed in the book, marijuana suppliers have a relatively difficult time leasing real property for their operations (see pages 655-662). The problem stems from a provision of the federal Controlled Substances Act CSA) that makes it a crime for a landlord to lease any real property “for the purpose of unlawfully manufacturing . . . [or] distributing” a controlled substance. 21 U.S.C. section 856(a)(2). Because of this provision, many landlords (LLs) have been reluctant to rent real property to marijuana suppliers. Even if a marijuana supplier finds a LL who’s willing to flout federal law, the supplier-tenant might have difficulty enforcing the terms of the lease against the LL. If the supplier-tenant sues the LL in court for breach of the lease agreement, the court might find that enforcement is preempted by the CSA. After all, ordering the LL to open her property to the marijuana supplier-tenant would force the LL to violate Section 856 (see page 661 n.4). In analogous situations (not involving marijuana), courts have held that state law is preempted when it imposes such a direct (impossibility) conflict with federal law.

To get around this problem, of course, a marijuana supplier could simply buy the property instead of leasing it. To be sure, this would put the supplier in violation of Section 856–that provision also prohibits owners/tenants from using property for manufacturing / distributing drugs. But since a marijuana supplier is already flouting sundry other federal prohibitions (e.g., against manufacturing and distributing marijuana), it is unlikely to care much about any added liability imposed by Section 856.

However, a different legal barrier created by state law might prevent marijuana suppliers from using property they own to manufacture or distribute marijuana. This legal barrier is called a restrictive covenant (or deed restriction). In a nutshell, a restrictive covenant is a limitation imposed on the use of land by an owner when it sells the property. For example, when a developer sell a parcel of land, it might impose a covenant that restricts how that land may be used in the future, in order to preserve the value of nearby properties the developer continues to own or manage. Importantly, the covenant may run with the land—i.e., it may bind all future owners of the property, and not just the first buyer.

A new Pennsylvania case, PharmaCann vs. BV Development, highlights how a restrictive covenant could be used to bar a marijuana supplier from opening a marijuana dispensary on land it owns. PharmaCann Penn, LLC has been licensed by Pennsylvania to distribute medical marijuana in the state. In October 2017, PharmaCann completed the purchase of a piece of real estate in Philadelphia from BV Development. PharmaCann wants to operate a medical marijuana dispensary on the property. However, Simon Property Group, a major real estate company that operates a nearby mall (Philadelphia Mills) and previously owned the purchased property, has objected to PharmaCann’s proposed use. (Simon has several other partners involved in the case, which I’ll refer to collectively as Simon et al.) Simon et al. claim that the PharmaCann’s use violates two restrictive covenants Simon et al. imposed on the property back in 1991 when it originally sold the land to Chi-Chi’s (the restaurant chain). Although Chi-Chi’s later sold the property to BV Development, the restrictive covenants run with the land (as noted above). 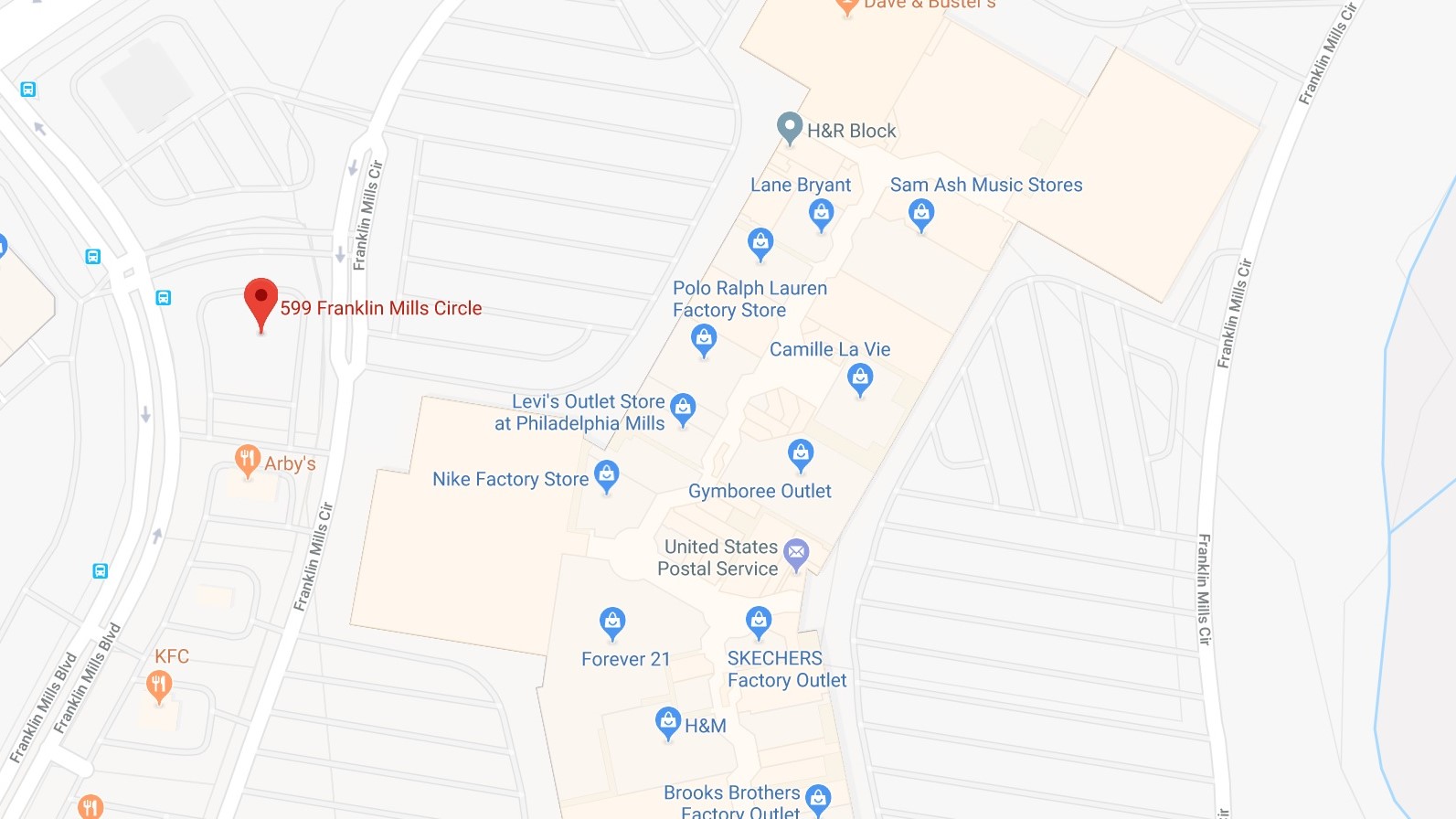 The covenants Simon et al. tied to the property (pictured above on the map, at 599 Franklin Mills Circle) bar 28 different uses of the property, including use as a “trailer court”, “mortuary”, “flea market”, “Supermarket”, “toy store which contains more than Eight Thousand Six Hundred” square feet, “Bowling alley”, “Nursery”, and any use “which emits or results in an obnoxious odor.” The full list of conditions can be found on pages 21-23 in PharmaCann Penn v. BV Development case docs.

The two limitations that are of particular relevance to PharmaCann bar:

“11. Any activity or use which is unlawful or conflicts with or violates the Development Agreement;”
. . .
17. Drug store (i.e., a store used for the sale and display of drugs, pharmaceutical, health and beauty aids, ad/or other such similar items);”

After Simon et al. objected to the sale, PharmaCann filed suit in state court seeking a declaratory judgment that its proposed used of the property did not violate these restrictive covenants. Simon et al. then sought to remove the suit to federal court, on grounds of diversity jurisdiction. In March 2018, the Eastern District of Pennsylvania upheld its jurisdiction over the dispute. See PharmaCann Penn Order. It has not yet made any ruling on the merits.

1. First, will a court interpret the two covenants quoted above to bar PharmaCann from opening a marijuana dispensary on the property?

PharmaCann could contest the restrictions as applied to its proposed use. In particular, PharmaCann could attempt to convince a court that the terms of the covenant are ambiguous. In cases of ambiguity, courts generally interpret covenants narrowly to allow freer use of the property.

It’s a tough sell, but here’s the argument PharmaCann could make. With respect to the first covenant (“unlawful”), it’s clear that selling marijuana violates federal law. Nevertheless, PharmaCann could argue that the covenant doesn’t clearly specify that it covers acts that are unlawful under federal law. In other words, it’s possible that the covenant bars only acts that are “unlawful” under state law. The same issue has arisen under state laws that bar employers from discriminating against employees who engage in “lawful activities” and state laws that bar probationers from engaging in “unlawful” conduct, and at least some of these courts have found the term “unlawful” (or lawful) to refer exclusively to state law (see book pages 120-123 and 665-672). Hence, it’s not unreasonable to suppose that a court might do the same when interpreting the same term in a restrictive covenant.

Although I think this is a somewhat strained reading of the term “unlawful”, it accords with another limitation courts impose on restrictive covenants: those covenants cannot go against public policy. PharmaCann could argue that the state of Pennsylvania clearly approves of its proposed use, and that enforcing the restrictive covenant against it would undermine the state’s policy of authorizing the distribution of marijuana for medical purposes.

2. Second, where should this dispute be heard?

As noted above, PharmaCann originally filed this lawsuit in state court. Simon et al. then sought to remove it to federal court, citing the court’s diversity jurisdiction as the sole grounds for such removal (the Notice of Removal is included in the packet of case docs file above). PharmaCann resisted removal, but the federal court issued an order in March 2018 (see above) upholding its jurisdiction over the case.

Oddly, however, the federal court rested its decision entirely on federal question jurisdiction. Even though the cause of action here (based on the covenant) is created by state law, the court reasoned that “‘federal jurisdiction over a state claim will lie if a federal issue is: (1) necessarily raised, (2) actually disputed, (3) substantial, and (4) capable of resolution in federal court without disrupting the federal-state balance approved by Congress.'” See Order page 4 (quoting Gunn v. Minton, 568 U.S. 251, 258 (2013). As to the first prong of the Gunn test, the court found that the “federal question of the dispensary’s lawfulness is necessarily raised because a court must consider and ultimately apply federal law in order for PharmaCann to get the relief it seeks.” Order page 4. In particular, it held that “the resolution of the federal question—namely, whether a medical marijuana dispensary is ‘unlawful’ under the Controlled Substances Act—is necessary to decide whether the dispensary is an ‘unlawful’ use under the deed. Indeed, PharmaCann seeks a court’s determination that its marijuana dispensary is lawful, which requires a court to apply federal law to PharmaCann’s chosen use.” Order page 4.

I think the court may have misunderstood a key issue in the case. It’s possible PharmaCann is claiming that its medical marijuana dispensary is really legal under federal law. Indeed, on page 5, the court suggests PharmaCann’s attorney may have made this claim at oral argument. But that’s hard to believe. Federal law clearly prohibits PharmaCann’s activities; that the federal DOJ isn’t currently enforcing the ban against PharmaCann doesn’t make the company’s activities lawful.

As noted above, the real issue in the case—the one PharmaCann might actually be raising—is whether the term “unlawful” in the deed refers to both state and federal law. The interpretation of the terms of a covenant—i.e., whether it bars a use of property that is unlawful as a matter of state, federal, local, international, or Bolivian law, is a state law issue. It doesn’t become a federal question just because the covenant refers to federal law. Otherwise, a simple contract, say, to “paint a picture of the President of the United States” or “tour the capital of the United States” would necessarily become a federal question.

Importantly, restrictive covenants do not pose the same preemption issue posed by Section 856 (discussed above)–preemption undoubtedly does pose a federal question. Unlike enforcement of an agreement to lease property to a marijuana dispensary, the refusal to enforce a restrictive covenant on that property is not preempted by federal law. That’s because refusing to enforce the limitation doesn’t force anyone to violate federal law. It would simply let PharmaCann go about its business without any interference from the state. And under the anti-commandeering rule, a state has no affirmative obligation to stop private citizens from flouting federal law, say, by barring them from using property to distribute marijuana.

Ultimately, this point may not matter much in the dispute. As noted above, Simon et al. sought removal based on diversity jurisdiction, and at least on the face of their request for removal, the requirements of diversity jurisdiction would appear to be satisfied here. In any event, it’s not clear that PharmaCann will fare any worse in federal as opposed to state court. Surprisingly, on some issues (like employment protections for marijuana users), federal courts appear have been far more protective of state law prerogatives than their state court counterparts.

3. Third, how much of an impact will the case (or restrictive covenants) have on marijuana suppliers?

If a court untimely finds PharmaCann’s medical marijuana dispensary violates the terms of a restrictive covenant, it would add another obstacle to those already hindering these state-licensed marijuana suppliers. However, this particular barrier could turn out to be a limited one.

For one thing, it’s not clear whether the restrictive covenants in this case—i.e., ones prohibiting “unlawful” uses or “Drug stores”—are commonplace. If they are not, marijuana suppliers could easily find properties that do not include them. (Restrictive covenants are published alongside property deeds, so they can be searched ex ante by buyers to avoid surprises). And even if a marijuana supplier strongly prefers a property with a restrictive covenant, it can potentially negotiate with the original grantor (or whoever else has the power to enforce the covenant) to have covenant removed or to leave it unenforced. For example, PharmaCann could offer Simon et al. a settlement if they agree to lift the covenant. It appears Simon et al. are the only parties with the power to enforce the covenant, which would simplify any settlement.

Again, an interesting case. I’ll try to post on significant developments in the case. For the time being, the Philadelphia Inquirer has more coverage of the case at How a federal judge in Philly could blow up the marijuana business.