What are the Harms of CBD Use? Making Sense of the FDA’s Recent Warning

In late November 2019, the federal Food and Drug Administration (FDA) warned the public about consuming cannabidiol (CBD). See FDA, What You Need to Know About CBD. It appears the FDA issued the warning because of booming demand for CBD products. From the FDA’s Announcement:

“You may have noticed that cannabidiol (CBD) seems to be available almost everywhere, and marketed as a variety of products including drugs, food, dietary supplements, cosmetics, and animal health products. . . . The FDA recognizes the significant public interest in cannabis and cannabis-derived compounds, particularly CBD. . . . [However,t]he FDA is concerned that people may mistakenly believe that trying CBD ‘can’t hurt.’ The agency wants to be clear that we have seen only limited data about CBD’s safety and these data point to real risks that need to be considered.”

In this post, I will briefly address a handful of questions spawned by the FDA Announcement.

What are the risks posed by CBD use?

The FDA suggests there are at least six health risks associated with CBD use, and that further research might uncover even more risks. Again, from the agency’s Announcement:

“1. CBD has the potential to harm you, and harm can happen even before you become aware of it.

-CBD can cause liver injury.

-CBD can affect the metabolism of other drugs, causing serious side effects.

-Use of CBD with alcohol or other Central Nervous System depressants increases the risk of sedation and drowsiness, which can lead to injuries.

-Changes in alertness, most commonly experienced as somnolence (drowsiness or sleepiness).

-Gastrointestinal distress, most commonly experienced as diarrhea and/or decreased appetite.

-Changes in mood, most commonly experienced as irritability and agitation.

3. There are many important aspects about CBD that we just don’t know, such as:

-What happens if you take CBD daily for sustained periods of time?

-What is the effect of CBD on the developing brain (such as children who take CBD)?

-What are the effects of CBD on the developing fetus or breastfed newborn?

-How does CBD interact with herbs and botanicals?

-Does CBD cause male reproductive toxicity in humans, as has been reported in studies of animals?”

How did the FDA identify those risks?

The latest warnings are based on the results of clinical trials involving Epidiolex, the CBD drug the FDA approved back in summer 2018. (For more on the approval of Epidiolex, see my earlier post here.) When the agency announced that it had approved Epidiolex, it noted several “common side effects” from taking the drug, including “sleepiness, sedation and lethargy; elevated liver enzymes; decreased appetite; diarrhea; rash; fatigue, malaise and weakness; insomnia, sleep disorder and poor quality sleep; and infections.” See FDA, Press Release on Epidiolex. These side effects closely mirror the risks the FDA cited in its more recent (November 2019) Announcement. For example, “elevated liver enzymes” is a sign of possible liver damage.

How serious are these risks?

I applaud the FDA’s effort to inform the public of the risks associated with taking a drug (especially the non-obvious risks). However, the agency’s Announcement comes up short in one regard: It does not help the consumer put these risks in perspective. In other words, it does not provide any data concerning the frequency of these harms. I think most people would agree that liver damage is a serious harm, and one they would prefer to avoid; but if CBD only increases the risk of liver damage by a very small amount, I suspect many people would tolerate that risk

The agency has provided some additional data on frequency in another document it prepared, for Epidiolex. In Table 3 of its Epidiolex Prescribing Information, the FDA summarized clinical trial data concerning the frequency of the drug’s side effects: 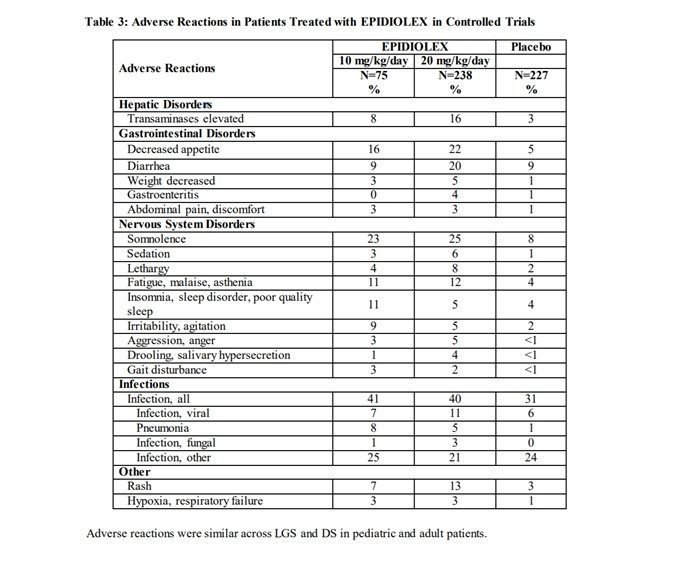 The data in Table 3 can help put the agency’s warnings in perspective. Consider liver injury (Hepatic Disorder).  As you can see from the Table, 8-16% of the subjects who took Epidiolex in clinical trials – versus only 3% of subjects who took a placebo — had elevated (above 3x upper normal levels) liver enzymes (transaminases). Because elevated transaminases can indicate liver damage, the FDA warned the public that CBD can cause liver injury.

However, there are at least two important qualifications to note when reading these data. For one thing, not everyone who has elevated liver enzymes (even 3x normal levels) will suffer liver damage. Put another way, it would be a mistake to read Table 3 and conclude that CBD use will cause 8-16% of individuals to suffer liver injury. The percentage will be lower than that – how much lower depends on the rate at which elevated liver enzymes indicate actual liver damage.

Second, in the fine print of its Epidiolex Prescribing Information, the FDA noted that “[t]he majority of [elevated enzyme cases] occurred in patients taking” Epidiolex with another epilepsy drug, vaporate. So the risk of liver injury may be primarily attributable to a drug interaction (which the FDA warns of separately), rather than to taking CBD by itself. To be sure, it’s important for people with epilepsy to know about this possible drug interaction. But it may be less of a concern to the rest of the general public, and it highlights a problem with using clinical trials that were focused on a particular patient population (people with epilepsy) to advise the public at large of the risks associated with a drug.

Lastly, I want to highlight an odd statement from the FDA concerning the magnitude of the risks associated with CBD. Namely, in its recent November Announcement, the FDA said that  “As part of the drug review and approval process for the prescription drug containing CBD [Epidiolex], it was determined that the risks are outweighed by the benefits of the approved drug for the particular population for which it was intended” (emphasis added). In other words, it sounds like the FDA thinks that Epidiolex/CBD is too dangerous even for people who suffer from rare epilepsy disorders – i.e., the disorders for which the FDA approved CBD as a treatment.

For those who are interested in learning more about how the law responds to evidence about the harms and benefits of a drug, the book discusses their role in scheduling and drug policy more generally on pages 195-226. Interestingly, in the past, the DEA/FDA did not have to gauge the harms of CBD because federal law lumped that substance together with THC (both were considered “marijuana”, see pages 21-27). But now that the 2018 Farm Bill exempts hemp-derived CBD from the definition of marijuana (and now that the FDA has approved Epidiolex), the agency is finally having to investigate the benefits and harms of this cannabinoid more closely.