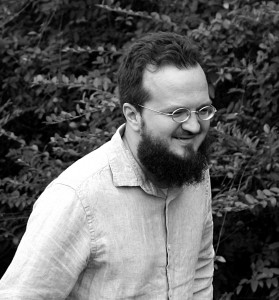 This is my personal faculty page at Vanderbilt University, where I am Associate Professor of the History of Christianity and an affiliate faculty member in the Program in Classical and Mediterranean Studies, the Program in Islamic Studies, and the Department of History.

I earned my Ph.D. in History from Princeton University with training in the history of the Middle East and Mediterranean in the periods of Late Antiquity and the Early Middle Ages (roughly 200-800 of the current era).

My teaching and research focus on the history of Christianity in the Middle East, Asia, and Africa. In particular, he is interested in historical texts in the Syriac language (a dialect of Aramaic). Although often overlooked, these Syriac sources offer many new perspectives on the history of Christianity. Syriac was the common language of Christianity in the Middle East and Asia for over a thousand years. Syriac literature and networks of Syriac-speaking scholars were often a cultural bridge between Christian and the Islamic cultures. Today perhaps more than twenty thousand manuscripts or fragments in Syriac survive, with a wide range in geographic origin stretching from Turkey and Egypt to western China and South India.

The study of Syriac is both poignant and pressing because the current state of violence in Syria and Iraq threatens to completely eradicate the tiny minority populations who have preserved the Syriac language and Syriac cultures for nearly two millennia. One of my driving passions is bringing public attention to the cultural genocide currently being experienced by these communities. Their loss of identity is a tragedy for the worldâs cultural diversity. In particular, the study of Syriac materials sources offer a valuable path for recovering non-Western voices in the history of Christianity.

I am currently writing a book, The Library of Paradise, about the history of reading in Syriac monasticism. In the Syriac traditions, monastic life was organized around the practice of contemplation. Reading and reciting Scripture and other theological texts played an important role in preparing for contemplation. When properly combined with prayer, reading was one of the steps in contemplation which could lead to a state of divine vision, a mystical encounter with the presence of God. Although reading was an essential part of this system of contemplation, I argue that it was also a fraught experience. Reading could distract just as much as it could aid the monk. The Library of Paradise traces these conflicting attitudes and advice about reading given by Syriac monks in the Middle Ages to illustrate how these monks used reading to recreate a “paradise” in which books were no longer needed.

My first book The Practical Christology of Philoxenos of Mabbug (Oxford University Press, 2014) is an analysis of a prolific Syriac author and theologian, Philoxenos of Mabbug (d. 523). Philoxenosâ works are one of the largest bodies of literature by a single author to have survived in Syriac. In Practical Christology, I offer a new approach to understanding the formation of early Christian theology through attention to overlapping contexts of religious practice. The book demonstrates how Philoxenosâ many roles as a metropolitan bishop, sponsor of a revised New Testament, and monastic theologian, lead him to understand theological debates within a larger vision of ascetic and spiritual struggle. It was religious practice that made theological formulas meaningful to Philoxenos and his audience.

In addition to research on late-antique Christianity, I am also strongly interested in the new possibilities which digital scholarship has opened up for scholars in the humanities. Not only do the methods of the âdigital humanitiesâ make it possible for us to answer scholarly questions in new ways, online scholarship also makes it easier than ever for scholars and their audiences to interact and collaborate. For minority cultures who lack state financed libraries or other cultural infrastructure, digital scholarship also provides an inexpensive way to preserve their cultural heritage.

With several colleagues, I have undertaken a digital humanities project to make the history of Syriac culture more accessible through a series of online publications, Syriaca.org: The Syriac Reference Portal. Syriaca.org is a joint project between Vanderbilt University, Princeton University, the Beth Mardutho Institute and several other international institutions. Funding for the project has been provided by the National Endowment for the Humanities, The Andrew W. Mellon Foundation and the International Balzan Prize Foundation.

The digital publications of Syriaca.org include: