Posted by David Michelson on Thursday, February 26, 2015 in events. 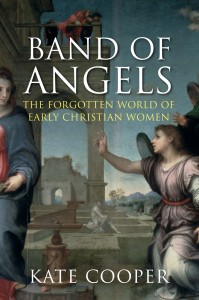 The Robert Penn Warren Center seminar on Late Antiquity is pleased to announce a lecture:

Kate Cooper is Professor of Ancient History at the University of Manchester (UK). In this lecture she will discuss her recent book Band of Angels: The Forgotten World of Early Christian Women, where she brings together the fruits of many years of academic research on womenâs âhiddenâ contribution to the growth of Christianity in its early centuries. âMore than anything,â she suggests, âthe vitality of early Christianity was built on the power of stories: stories told around the table at meal-times, in prayer meetings, to children at bed-time. It was by handing down stories that the earliest Christians remembered the life and death of Jesus, and captured its meaning for their own communities and for the future. Naturally, women played an important part in this. Wonderfully, we are closer to understanding womenâs contribution to the early Church than we have been at any time in history.â

This event is sponsored by Vanderbilt University’s Department of Classical Studies, The Carpenter Program in Religion, Gender and Sexuality at Vanderbilt Divinity School, and the Late Antiquity seminar at Vanderbilt’s Robert Penn Warren Center for the Humanities.