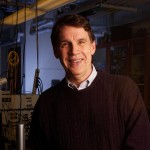 Richard Haglund was educated at Wesleyan University, graduating with a B. A. magna cum laude with Honors in Physics.Â  He received an M. A. in physics from Stony Brook University just before being drafted into the United States Army; he was discharged from active service as a 1st Lieutenant in the Signal Corps in 1971.Â  Haglund received the Ph.D. in experimental nuclear physics from the University of North Carolina (Chapel Hill).Â  He was a member of the scientific staff of the Los Alamos National Laboratory from 1976 to 1984, beginning as a postdoctoral staff member in nuclear physics and then joining the laser fusion program a year later.Â  He joined the faculty of Vanderbilt in 1984 and currently is Stevenson Professor of Physics.Â  Haglund is a Fellow of the American Physical Society and was awarded an Alexander von Humboldt Foundation Senior Scientist Prize for contributions to materials physics.