Posted by Steve Baskauf on Sunday, November 2, 2014 in News.

The ginkgo is one of my favorite tree species.  Not only is it a beautiful tree, but it has many unusual features and interesting stories. 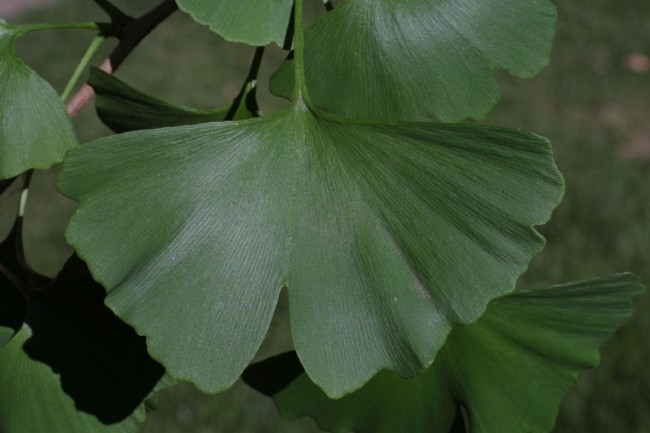 The common name of the ginkgo is “maidenhair tree”.  The tree gets this name because of the unusual branching vein pattern on its leaves (a pattern shared by the leaves of the maidenhair fern).

The leaves of ginkgoes come off of the branches from short spur shoots.  When seen from a distance, this sometimes gives an overall effect that makes the branches look like pipecleaners coming out of the trunk. 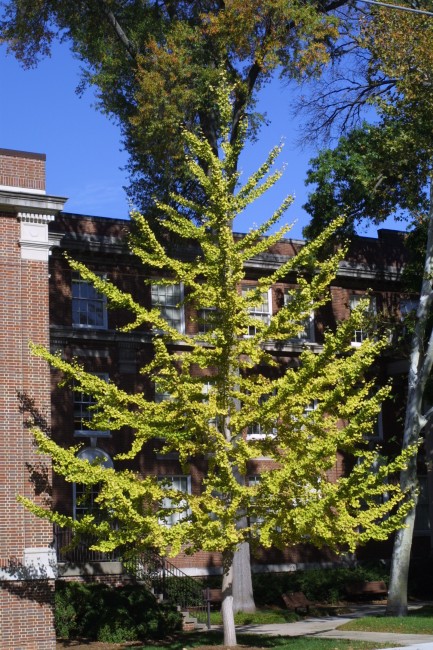 One surprising thing about the leaves of the ginkgo is that it has leaves at all!  Ginkgos are a kind of gymnosperm, a group of plants whose members more commonly have needles than large leaves.  But the distinguishing feature of this group is not the kind of leaf, but rather that its seeds develop within cones and not from flowers.  Unlike most trees, individual ginkgo trees are either male or female.  If you look closely at a female ginkgo tree in the spring, instead of flowers you may see something that looks like this:

The tiny, sticky droplets on the receptive female cone catch pollen blown by the wind from a male tree.  As the summer progresses, these tiny cones develop into larger, fleshy cones that contain a single seed.  If you search under a female ginkgo this time of year, you can find the female cones, which look like this:

The most noticeable thing about these female cones is their smell.  It has been described in various ways, but the closes thing that comes to my mind is vomit.  If you walk by a female ginkgo tree this time of year, the stench is very disagreeable.  For this reason, it is pretty unusual to find female ginkgo trees since their owners usually cut them down as soon as the trees are old enough for their sex to be apparent.  Although there are many ginkgo trees in the arboretum, there are only two places where you can find female ginkgoes.  One is by the Owen Graduate School of Management and another is between Cole Hall and the Beta Theta Pi house on the corner of West Side Row and Vanderbilt Place.  There used to be a third tree on Peabody Campus, but alas, it was cut down due to complaints of people who worked in the neighboring buildings.  Interestingly, ginkgo seeds are a delicacy in Chinese and Japanese cuisine, although they can cause illness if eaten in large quantities over a long period of time.  Ginkgo biloba is also well known as an herbal supplement, although its medicinal properties are still unclear.

Ginkgoes are the quintessential survivors.  They were known to westerners only by fossils until 1691 when Engelbert Kaempfer saw them growing in a Buddhist monastery in Japan.  It has been believed that they may have been extinct in the wild and lived only in cultivation on temple grounds; however, recent research suggests that some populations in China may be native.  Ginkgo biloba is the only surviving species in its entire phylum, order, class, family and genus, so it really is a living fossil of sorts. Six ginkgo trees were among the few living things to survive the atomic bomb explosion at Hiroshima.  Although charred by the explosion, they sprouted and now serve as a symbol of hope.

Bishop Charles Galloway was president of the Vanderbilt Board of Trust from 1905 to 1909.  Chancellor Kirkland remarked after his death: “His education was not finished in college, as is the education of some young men; it was merely begun there.  It was continued with him by constant reading and study, by travel throughout the whole civilized world, by wide contact with men of every type and every profession, and by definite participation in great enterprises of important character.”  One of these great enterprises was bringing the first ginkgo to Vanderbilt from Asia. This tree, the largest ginkgo in the arboretum, is still growing near Kirkland Hall and has a diameter of 1 meter (3 feet).

In the fall, ginkgo leaves turn a beautiful yellow. As they fall to the ground, they create a yellow carpet on the ground underneath the tree. 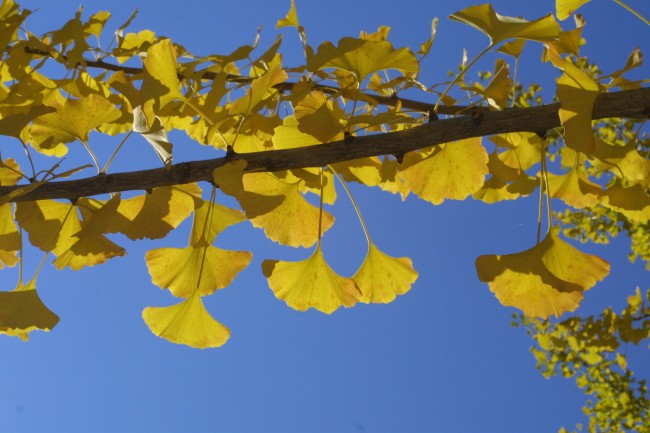 One morning last November as I was walking to work, I came across Marie McEntire looking at a row of ginkgoes near the Divinity School.  Since I’m always curious to know why people are interested in trees of the arboretum, I asked her what she was looking at.  She replied that she was trying to decide if those ginkgoes were actually losing their leaves in unison.  I said that I’d never heard that they did that.  She referred me to a Howard Nemerov poem called “The Consent” that contains the line: “the ginkgo trees that stand along the walk drop all their leaves in one consent”.  (See this web page for the entire poem.)  So far we haven’t heard of any scientific evidence showing that ginkgoes actually follow some signal that allows them to drop all of their leaves at once.  However, in a later conversation with a student, the student remarked that she loved ginkgoes because of the way that they all dropped their leaves at once.  She said that she had observed it on the ginkgoes on her street!

So keep your eyes on the ginkgoes this fall and decide for yourself.  If you enjoy poetry, here is another poem by Eve Merriam about ginkgoes as survivors. 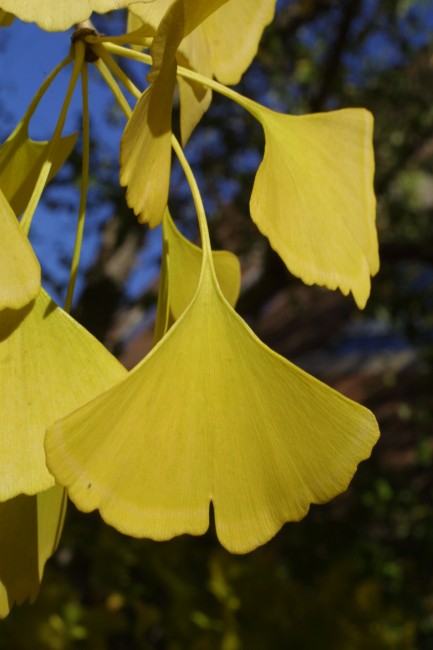 I asked Jonathan Ertelt, the greenhouse manager for the Biological Sciences department to think about some ideas for a guest blog post.  He mentioned either writing about ginkgoes or dawn redwoods.  I suggested dawn redwoods since I had recently written this post.  However, I got an interesting note from him that I’ll post here:

“Mentioning to Dr. Baskauf the other day that I had two tree essays coming together in my mind, and that one was about Ginkgoes, he responded that I should likely focus on the second one since he had just written up one pretty complete on that most interesting leaf-bearing gymnosperm. Curious as to whether or not “my take” on this tree had been dealt with, I immediately went to the site and read his piece.

“I was better than ¾ of the way through it when there it was, the beginnings of a discussion on the leaf fall phenomenon of the Ginkgo tree. Talking with Marie McEntire, Steve had been referred to the Howard Nemerov poem entitled The Consent. (Again, see this url for the entire poem: <http://kwanten.home.xs4all.nl/nemerov.htm>) Steve quoted the line about the ginkgo trees all dropping their leaves “in one consent,” but after looking at the poem I realized that it was the half line before that would give me the  most difficulty – “on a single night not even near to freezing…” My consternation lay in the fact that, if the poem was correct in its temperature reference, then my newly recognized theory of Ginkgo leaf drop would only half solve the mystery.

“The mystery started for me many years ago when I was an undergraduate up on the plateau south of here, studying away in Sewanee. Well into the fall semester of my freshman year on the mountain, and each year that followed,  a spray of yellow fan-shaped leaves came under the door one evening along with a call of “Happy Ginkgo Day!” I came to find out that there were students who stood underneath the canopy of these trees, all males as best I recall (the trees that is), and these students had bags and they tried to catch as many of the raining leaves as they could. It was Ginkgo Day, that 24 hour period during which the Ginkgo trees dropped all their leaves. I was one of those students during at least one of the years that followed. Wonderful times, holding onto child-like activities while working to grow towards adulthood at the same time.

“I’ve watched the Gingko trees turn their golden yellow hues every fall since then, and noted that not everywhere do they drop all their leaves in such a brief time. They do seem to shed pretty quickly, less than a week passing from the time of the first leaf drop until the last one is down, sometimes having held onto the golden fans for as long as a week or two before the deluge starts.

“Being more of the observational naturalist and less the poet, I looked for something clearer than unspoken consent among the trees, and felt that temperature probably played a role. This year, finally, I thought that I had it pegged. This year the temperature dropped abruptly, an early cold front coming down on us from the more northern climes. We had several nights in the low 30’s, even upper twenties. But then came the morning when the temperature dropped almost to twenty – the low was somewhere between 20 and 25 degrees Fahrenheit. And as I walked onto campus that morning, I passed several Ginkgo trees, and the leaf drop was complete. Overnight, they had dropped all their leaves – even the one that was clearly not yet ready, the one with leaves still mostly green – all the leaves were down. I had already noted this with the Ginkgo trees on my street, as I had walked down to catch the bus, and had seen the trees in Hillsboro Village had shed their golden foliage overnight as well. But now, here was a tree seemingly not yet prepared to drop its leaves, having barely started to lose their chlorophyll and change to the brilliant yellow. The only one I could see anywhere around that hadn’t dropped all its leaves already was the one closely surrounded by buildings and parking areas, which probably held enough residual heat to moderate the air temperature of that microclimate in the immediate area of that tree.

“So therein lies the consternation of that half line of poetry and the question of its accuracy. And the frustrating thing for me is that I think that it may well be accurate. “On a single night, not even near to freezing…” I am more certain now than ever that temperature plays a role in this tree’s leaf drop phenomenon.

“Perhaps there is a temperature gradient, and the longer that the leaves have changed the less extreme the temperature has to be to initiate this cascade of yellow – and perhaps with less extreme  temperatures, the drop is not quite as quick, though still speedy by other species’ measure. I have not explored the literature in order to discover whether someone has looked at this phenomenon more closely, but I do suspect that there will be no evidence found of any signal between trees encouraging a synchronous leaf fall. Never the less, every year I look for the day, or at most two or three days, in order to celebrate – “Happy Ginkgo Day!”

Steve Baskauf is the communications coordinator of the Vanderbilt Arboretum and a senior lecturer in the Biological Sciences Department at Vanderbilt University. He can be contacted at steve.baskauf@vanderbilt.edu.