The Urban Legend that Won’t Die

Of all of the interesting topics related to Vanderbilt’s arboretum, none is more full of folklore than that of the status of the arboretum itself.  This past week, students in my Intro to Biological Sciences lab course went out on campus to identify and measure trees.  In addition to my general happiness associated with being outside on a beautiful spring day, I enjoyed having the opportunity to chat with students about the trees as they worked.  Every day, students said things about the arboretum, like “Is it true that the arboretum has every kind of tree in Tennessee?”, “Did Vanderbilt really lose its arboretum status?”, and “I heard that Vanderbilt isn’t really an arboretum.”  Although arboretum website has pages of information about the history and status of the arboretum, virtually none of the students knew that there even was an arboretum website. (There is! It’s at http://vanderbilt.edu/trees/)  Yet all of them had heard stories about the arboretum from somewhere.

Every Tree in the State of Tennessee

I love to accumulate folklore and trivia about whatever subject I’m working in.  So when I got involved in working with arboretum outreach, I started paying attention to all of the details and facts about the arboretum that I could find.  Early on, I was given access to the tree layer of the Vanderbilt GIS database so that I could use it to make maps for the online tree tours.  Given the comprehensive nature of that database, I could conclusively answer the question of whether the arboretum actually had a representative of every species of tree native to the state of Tennessee.  Not long before that time, the authoritative book “Guide to the Trees, Shrubs, and Woody Vines of Tennessee” [2] had come out, so it was a simple matter to compare the database against the book and determine that there were, in fact, many species of trees that weren’t present in the arboretum.

In conversation with Pam Sevy, who was the campus landscape architect and arboretum director at that time, we decided that it would be a worthy goal to try to increase the representation of native Tennessee trees in the arboretum.  I made a list of common native trees that we didn’t have on campus and a number of them were acquired from the GroWild native plant nursery and planted in strategic locations on campus.  Most notably, in the winter of 2005-06 a nice collection of native hickories was planted in the middle of Magnolia Lawn [3]  Those trees are now over ten feet tall and can be enjoyed by campus visitors.

Nevertheless, there are still Tennessee native trees that we don’t have in the arboretum.  One example is devil’s walking stick.  When small, this species has few branches.  In the winter when it has lost its huge leaves, it looks like a walking stick bristling with sharp spines – not exactly the kind of thing one would want jogging students to accidentally run into in a campus planting!

Another example of a tree we don’t have in the arboretum is Harbison’s hawthorn, another spiny tree that also happens to be extremely rare.  Until recently, it wasn’t available in tree nurseries.  I could give other examples, but the point is that there is no way that the arboretum has every native tree in the state of Tennessee! 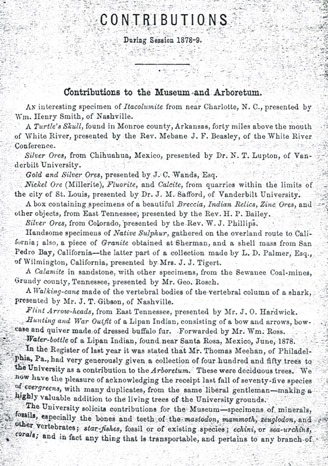 It’s clear that from the moment the university was founded as the brainchild of Bishop Holland McTyeire, he planned for it to be full of trees.  Recently, Sara Sterkenburg, cataloging and exhibition services librarian with Special Collections and University Archives at Vanderbilt’s Jean and Alexander Heard Library located a letter [4] in the archives from Bishop McTyeire to Cornelius Vanderbilt written on Nov. 24, 1873.  In the letter, McTyeire reports on the construction of the first building of the university (now called Kirkland Hall).  He also notes that he was “busy in having about 200 trees planted in the grounds”.  By 1877, the tree planting had evolved into a conscious effort to establish an arboretum.  Dr. Safford, the botany professor, worked with Bishop McTyeire to collect as many different species of trees as possible in order to establish an arboretum that could be used for educational purposes.  A Philadelphia florist, Thomas Meehan, donated over 500 trees to the effort.  The list of the 360 planted deciduous tree species was documented in an 1879 catalog [5] that is also in the archives.  So one reason that Vanderbilt is an arboretum is simply because it has been called an arboretum for over 140 years.

To my knowledge, the first effort to make Vanderbilt an “official” arboretum was spearheaded in 1987 by Tara Armistead, campus landscape architect. [6]  As a result, the campus became a member of the American Association of Arboretums and Botanical Gardens (now the American Public Gardens Association), and “officially” became an arboretum.  (I don’t know whether we’ve continued to pay membership dues since then or not.)

The most “official” accreditation for arboreta is the Morton List of Arboreta, administered by ArbNet.  There are different levels of accreditation [7], and Vanderbilt could probably qualify as a Level II arboretum.  There are also certification programs by Tree Campus USA and the Tennessee Urban Forestry Council.  Vanderbilt could be accredited by any of these organizations, but actually isn’t certified by any of them at the present time.  Even so, none of them have any sort of requirement that an arboretum have every species of tree in the state of Tennessee.

The Legend that Won’t Die

The idea that Vanderbilt has every species of tree native to Tennessee is very persistent.  To my chagrin, several years ago I discovered that the Wikipedia article on Vanderbilt University made the claim that the campus had representatives of every species native to the state of Tennessee.  I edited that statement out of the article, but several years later, it had reappeared again like a head of Hydra.  The second time I removed it from the article, I replaced it with information about the number of tree species on campus and cited the arboretum “about” page (which I had conveniently written not long before). [8]  That seemed to do the trick – I just checked the Wikipedia article and the urban legend is gone.  (Wikipedia does still insist that Vanderbilt is a “national arboretum”, whatever that means.)

My best theory about how the “every tree in the state of Tennessee” urban legend is passed on is that it persists in the folklore of the undergraduate admissions student tour guides.  I had overheard tour guides tell the myth to prospective students and realized that this was at least one way that it was being passed on.  About ten years ago, one of my undergrad teaching assistants had a job as a tour guide for undergraduate admissions.  I complained to her about how the tour guides kept repeating this myth.  Shortly afterward, she became in charge of actually training the new tour guides and she explicitly told them that the myth was untrue and that they should stop telling it to prospective students.

Nevertheless, on two separate occasions several years later when I took the Vanderbilt campus tour with my two prospective student daughters, the tour guide repeated the myth to our group.  (Each time, I considered correcting the guide, but since I didn’t want to embarrass my daughters, I refrained.)  Since nearly all undergrad tour guides had been told the myth when they took the campus tour themselves as prospies, it is natural that they should repeat it when they give their own tours.  So it’s probably unreasonable to think that it is possible to stamp out this source of transmission.

The Source of the Myth The one puzzling thing about the myth is where it came from.  It is such a ridiculous proposition that I can’t believe that it actually came from any real accreditation information.  However, just last Friday I got a big clue when Sara Sterkenburg passed on to me some more interesting information that she found in the archives. She located an article called “The Trees of the West Campus” by G.R. Mayfield, published in The Vanderbilt Alumnus in about 1918. [9]  I was really excited to see this article, because as I read it, it was clear that it contained source material that was used in several more recent publications.  This article is probably about as close as we can get to the original sources of information about the arboretum, since the author got information from Bishop McTyeire’s daughter, Chancellor Garland’s granddaughter, and some old-timers who knew the earliest history of Vanderbilt.

But the most interesting thing to me in the article was a statement in the first paragraph: “This splendid collection of native oaks was the result of an attempt on the part of Dr. Safford and Bishop McTyeire to place on the campus one or more specimens of all of the ‘trees, shrubs and woody vines’ native to this state.”  There it was: “all of the trees … native to this state” !  There is no question in my mind that this sentence from 1918 is the source of the urban legend.  Somewhere along the line, the information that Safford and McTyeire wanted to include every native species of tree in the arboretum morphed into the idea that the arboretum HAD every tree species native to the state and that having every tree native to Tennessee was some kind of requirement for being an arboretum.

If I’m correct about this (and there is probably no way to ever know for sure), we are now at the 100th anniversary of the birth of that urban legend.  Happy Birthday!

[2] Wofford, B. Eugene and Edward W. Chester. 2002. Guide to the Trees, Shrubs, and Woody Vines of Tennessee. The University of Tennessee Press.

[5] You can view the catalog here.

[6] “Tree time at VU”. Vanderbilt Register, June 26, 1987.  View the article here.  Note that this article is the source of another urban legand – that “someone gave a million dollars to label the trees on campus”.  The actual size of the endowment of the Mapheus Smith Fund was $15,000.