The Trees of Peabody College

Posted by Steve Baskauf on Thursday, October 1, 2015 in News. 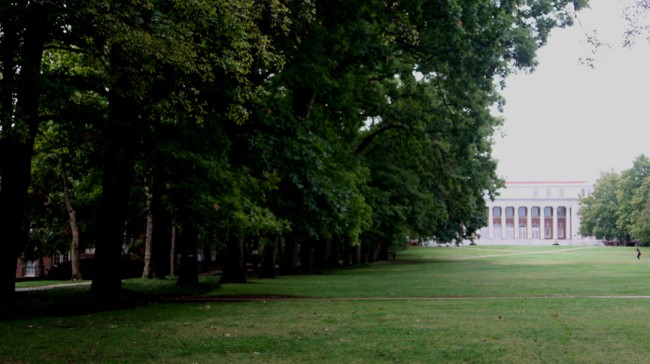 The history of trees on the main Vanderbilt campus is fairly well known (see the Arboretum History page on the Vanderbilt Arboretum website).  However, prior to the merger of Peabody College with Vanderbilt University in 1979, the Peabody campus had a history that was separate from Vanderbilt’s, so details of the history of Peabody’s trees hasn’t typically been included in accounts of the Arboretum’s past.  The purpose of this blog post is to explore some of that history in order to understand the origin of Peabody’s trees and examine how the Peabody’s landscape has evolved over time.

The history of Vanderbilt’s main campus could be summarized succinctly as follows.  At the founding of Vanderbilt in the 1870’s, clearing for agriculture and the devastation wrought by the Civil War created a site that was nearly treeless except for the Bicentennial Oak and a few other large trees in the vicinity of Old Central (originally a farmhouse).  Bishop Holland McTyeire embarked on a massive tree-planting campaign which set the stage for the woods-like character of the original part of main campus.

In the mid-1860’s, Daniel W. Phillips, a white Baptist minister, founded a college for freed slaves that was later known as Roger Williams University.  By 1874, Phillips had purchased the William H. Gordon farm at the current site of Peabody campus to use as a site for the university.  For the next thirty years, Roger Williams University was an important training grounds for black ministers and teachers as well as providing basic educational resources to blacks who did not have access to public schools.  The story of Roger Williams University is fascinating and not well known at Vanderbilt, although there is a historical sign near the Village At Vanderbilt bridge recognizing its significance.  For more information, I recommend a fine article from The Tennessee Magazine [2]. I haven’t looked extensively for photographs showing the appearance of the Roger Williams campus, but the photo above indicates that there were a number of trees planted on the campus in an informal manner.

In the context of the segregated South, the presence of a black university in the midst of the increasingly affluent and suburbanized west side of Nashville was increasingly awkward.  After the turn of the 20th century, vandalism and violence towards the school increased, including shootings.  The grimmest moments occurred in 1905, when both of the school’s main buildings burned to the ground.  In at least one of the cases, arson was a possible cause.  These disasters marked the end of Roger Williams University on that site.  The school sold the property to the trustees of Peabody Normal College in 1910 and moved to a different location.

The purchase of the land by Peabody marked a major turn in the state of the campus.  Peabody College already had a long history by 1910, having its origins in 1867 in a $2 million bequest by George Peabody to start an education fund that eventually resulted in the formation of a teacher training school as part of the University of Nashville. [3]  In 1911, the College’s board hired Bruce Payne as the college’s president and charged him with moving what was then called Peabody Normal College from its old campus downtown to the newly acquired property on Hillsboro Road.  In addition to fundraising, Payne was also charged with developing a master plan for what the college would become.

The plan “imagined a college on a grand scale, planned with many of the features of the University of Virginia (where Payne had worked before Peabody).  The original plan envisioned monumental buildings with columned facades and expansive greens between buildings.  This was not the plan for a small teachers college but an ambitious architectural design for a major institution — even though the college had not opened its doors to students and did not have the funds to construct the buildings!”. [4]

Reproductions of these original plans can be seen in an exhibit in the lobby of Cohen Memorial Hall on Peabody campus.  They show the grandiose scale of the plan, which included a large sculpture garden at one end of a green, with a formal European-style garden at the other.  At the end of the green was an imposing domed building, which eventually came into existence as the Social Religious Building (now the Wyatt Center).

In a later rendering, the design was less ornamented.  The domed building still dominated the central green, but the formal garden was gone and the extension across Hillsboro Road (where the Medical Center is now located) was dropped since the land there that was acquired from Vanderbilt was returned to the university.  Although this design differed somewhat from the eventual form of Peabody College, it contained the essential features: the domed Social Religious Building at one end of the green (known as the Peabody Esplanade), rows of columned brick buildings along the sides of the esplanade, and at the far end, open space that is now called Magnolia Lawn.

The evolution of the former grounds of Roger Williams University into the formal University of Virginia clone envisioned by President Payne was gradual.  The Home Economics and Industrial Arts (now Mayborn) Buildings were constructed by the opening of the campus in 1914, followed closely by the Jesup and Social Religious Building (now Wyatt Center). By the end of the 1920’s the axis of the campus was firmly established, with brick buildings lining both sides of the esplanade and with the Demonstration School (now University School of Nashville) anchoring the far end of the greenspace and balancing the monumental Social Religious Building.

But what about those rows of trees?  The first aerial photos of the campus date from the 1920s and show how the morphogenesis was accomplished. In this aerial photo from 1925 or 1926, the layout of the esplanade is firmly established by the location of sidewalks and several of the planned brick buildings along its side.  However, the trees, which remained from the Roger Williams campus, are more or less randomly located in the open spaces.

However, closer examination of another aerial photo from 1925 shows an important clue of how the transformation to Payne’s plan was being accomplished.  By georectifying this photo using GIS software, then overlaying the layer for existing trees, we can see that there was a series of very small trees planted in a row that correspond to the current row of trees that line the esplanade and which can be seen in the photo at the top of this page.

As time passed, the larger trees that remained from the Roger Williams days died or were removed, and the row of trees lining the esplanade were maintained until they grew into the large trees we see there today. Given their size in the 1925 photo, it is safe to say that they were probably planted at or soon after the opening of the college in 1914.  Thus, the largest trees we see lining the esplanade today are almost exactly a century old.  There are a few exceptions: larger trees that by luck were in line with the row of trees and survived.  One example is the large red oak tree in front of the Payne Building, which is the largest red oak in the arboretum and probably the largest tree on Peabody Campus.

By the mid-20th century, any trees in the center of the esplanade were gone and the line of trees along each side were grown to maturity.  A series of columned brick buildings had been added along both sides, so the the plan for Peabody College as envisioned by President Payne and his landscape architect Warren Manning in 1912 had come to fruition.  In 1965, the National Historic Landmarks program designated Peabody’s central lawn and surrounding buildings as a historic district. [5]

Magnolia Lawn, which fronts the Edgehill Avenue side of the campus, never materialized into the formal garden shown in the first Manning plan.  However, the central axis of the Peabody campus did influence the replacement of trees on the lawn.  Over time, there were fewer trees in the center of the lawn – perhaps to allow for an unobstructed view from the Demonstration School to the Social Religious Building.  Magnolia Lawn has its own interesting history, which will be featured in a future blog post.

Thanks to Jenny Winston, University School of Nashville archivist and the folks at Vanderbilt’s archives for help with locating the aerial photos!

Steve Baskauf is a senior lecturer in the Biological Sciences Department at Vanderbilt University.  He serves as the communications coordinator for the Vanderbilt Arboretum and can be contacted at steve.baskauf@vanderbilt.edu.  Posted 2015 October 1.