Epilepsy negatively impacts quality of life due to the seizure burden and associated depression and anxiety, in addition to increased morbidity and mortality. Temporal lobe epilepsy (TLE) is one of the most common forms of focal epilepsy. Anti-epileptic medication is successful in treating about 60-70% of these patients. In the remaining patients, usually after long, unsuccessful drug trials, surgical intervention of the presumed seizure focus leads to seizure freedom in 50-80% of patients. Therefore, more accurate early predictors of pharmacological and surgical treatment outcome are needed to improve clinical management of these patients. The scientific premise of this work is that while the identification of the seizure focus plays an important role in directing management of focal epilepsy patients, the outcome of treatment (pharmacological and surgical) is significantly influenced by the connectivity across large widespread network(s).Therefore, the goal of this project is to develop early biomarkers of drug responsiveness and surgical outcome using MRI functional and structural connectivity quantification. In a homogeneous group of drug refractory mesial TLE patients whose seizure focus was presumed to be the hippocampus based on current clinical assessments, the relationship between resting-state functional and structural network integrity in seizure propagation networks were quantified non-invasively using MRI. These network alterations were related to disease and cognitive characteristics before and after surgery. This allowed the development of a preliminary MRI connectivity biomarker for post-surgical seizure outcome in mesial TLE. Building on this foundation, the specific aims of this proposal will result in the improvement of functional and structural connectivity biomarkers of surgical outcome in mesial TLE (Aim 1), and the development of similar biomarkers for use in other TLE patients with seizures originating in the temporal lobe outside the mesial temporal structures (Aim 2). The success of Aim 3 will provide a method for early identification of those who will and will not respond to anti-epileptic medication to reduce prolonged drug trials. The overall outcome of this work will directly address the 2014 NINDS Benchmarks for Epilepsy Research section III part B: to identify biomarkers for assessing or predicting treatment response, including markers that may identify specific populations that are likely to have good outcomes or develop adverse responses. As such, this study has the potential to result in significantly improved clinical management of a common debilitating disorder. 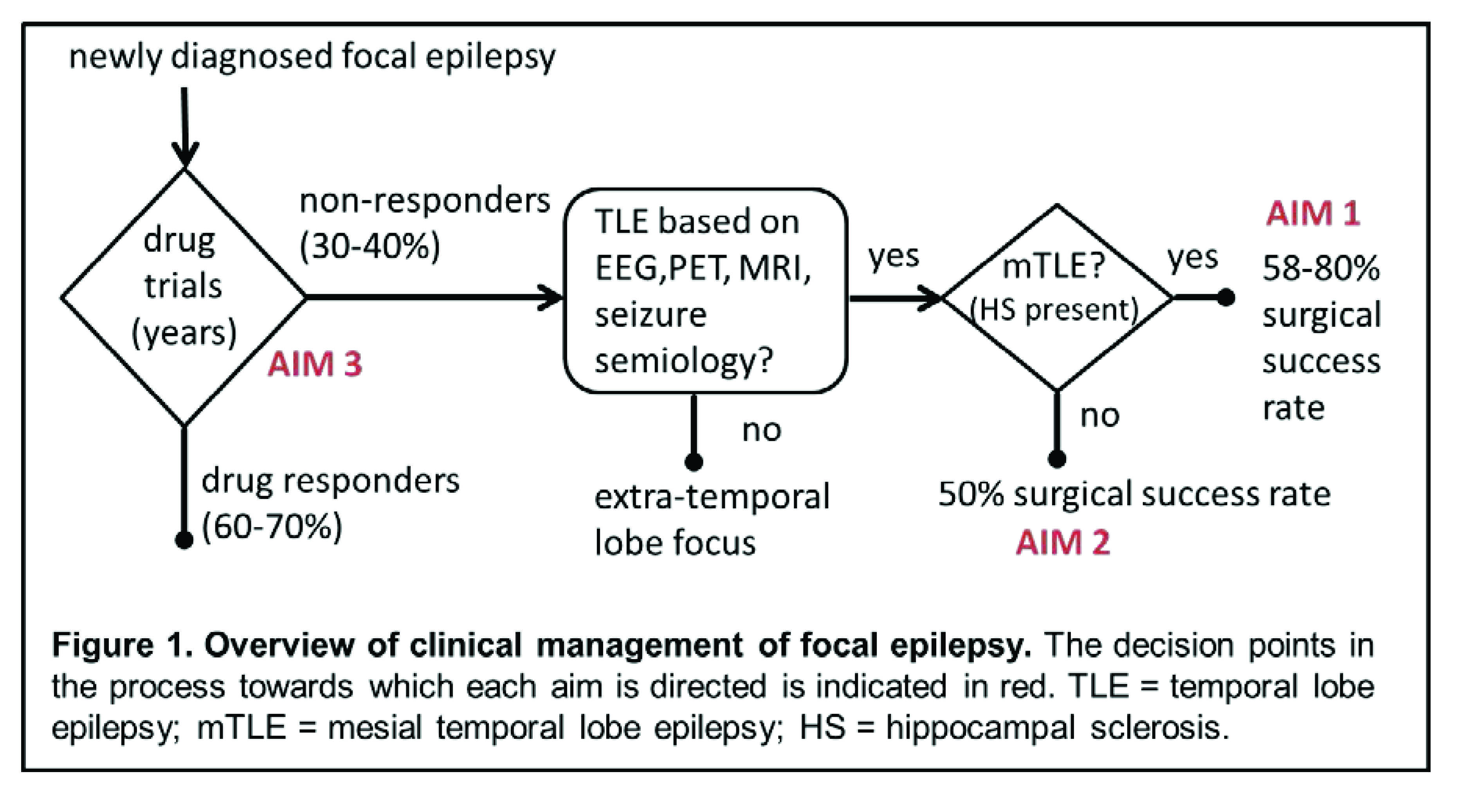 Epileptic seizure burden decreases health related quality of life, and is associated with increased morbidity and mortality. Temporal lobe epilepsy (TLE) is one of the most common forms of epilepsy. For about 60-70% of these patients, anti-epileptic medication is a successful treatment. In a subset of TLE patients gold standard clinical assessments identify the hippocampus as the seizure focus (mesial TLE or mTLE), and surgical resection of this region is a potential treatment for those that are drug refractory. However, even in these seemingly homogeneous patients with a well-defined seizure focus, seizure freedom rates from surgery range from approximately 58% to 80% of patients. Our recent work suggests that while the seizure focus may be the same across this group of patients, the network of seizure propagation may be variable. Using Magnetic Resonance Imaging (MRI) a presurgical functional and structural model network was characterized in those patients that were seizure free one year post surgery. Subsequent patients with networks that differed from this model had unsuccessful outcomes with no improvement or worsening of seizures within the first year after surgery. In patients with improvement from surgery whose presurgical propagation network was consistent with the model, variations in a few specific connections were associated with length of time until seizure recurrence (up to 3 years). This suggests a similar network is responsible for late seizure recurrence in these patients. Furthermore, by identifying this unique cohort of mTLE patients with similar network properties in whom late seizures may recur, we hypothesize that it is possible to quantify networks longitudinally as recurrence develops after surgery. Therefore, the overall goal of this project is to quantify presurgical and post-surgical MRI network connectivity and their relationship to seizure recurrence after mesial temporal lobe surgery. In Aim 1 the previously defined presurgical MRI functional and structural connectivity model of mTLE will be further developed and validated as a biomarker of long term seizure outcome. While the biomarker will include only presurgical connectivity measures, the development will be informed by the knowledge of how networks evolve after surgery as determined in Aims 2 and 3. In Aim 2 longitudinal post-surgical MRIs will be used to quantify functional and structural network evolution for three years after surgery and localize networks responsible for post-surgical seizures. Finally, Positron Emission Tomography (PET) will be used to localize the seizure focus via hypometabolism after seizure recurrence to compare with and to inform the networks identified in Aim 2. This work will ultimately result in the quantification of network evolution in seizure recurrence, and biomarkers of long term seizure outcome in mTLE. 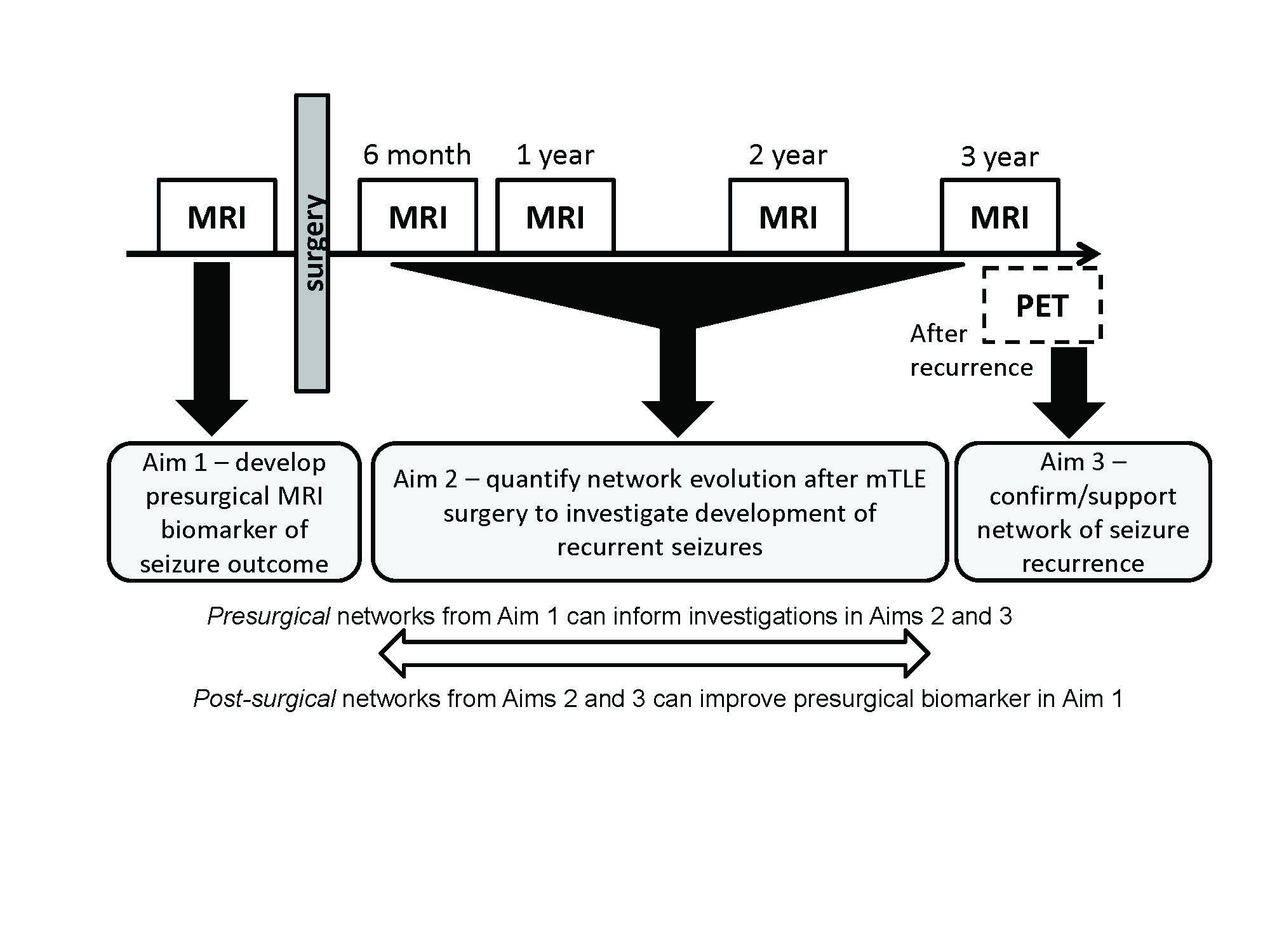