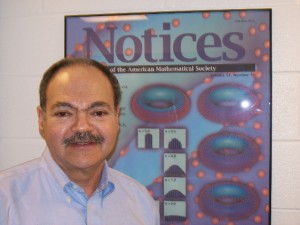 Edward B. Saff received his B.S. in applied mathematics from Georgia Institute of Technology and his Ph.D. in Mathematics from the University of Maryland, where he was a student of the distinguished analyst Joseph L. Walsh.

He spent a postdoctoral year as a Fulbright fellow at Imperial College in London, England before joining the faculty at the University of South Florida (USF) in Tampa, where he rose through the ranks from Assistant Professor to Distinguished Research Professor. During his tenure at USF, he founded and directed the Institute for Constructive Mathematics (1985-2001); served as Associate Director, Florida Regional Center for Excellence in Mathematics, Science, Computers and Technology (1983-1990); and was a member of the Florida House of Representatives Special Task Force on Science, Mathematics and Computer Science (1982-1983). He joined the Vanderbilt faculty in 2001 as Professor of Mathematics and Director of the Center for Constructive Approximation. During the period 2004-2007, he served as Executive Dean of Vanderbiltâs College of Arts & Science.

Saffâs research areas include approximation theory, numerical analysis, and potential theory. He has published more than 270 mathematical research articles, co-authored 8 books, and co-edited 11 volumes. He received a Guggenheim Fellowship in 1978, which he spent at Oxford University. Other recognitions of his research include his election as a Foreign Member of the Bulgarian Academy of Sciences (2013); and as a Fellow of the American Mathematical Society (2013). In addition, he received Vanderbilt Universtiy’s Chancellorâs Research Award (2005) and is an ISI Highly Cited Researcher (since 2007), was an American Math Society Regional Conference Main Speaker (2001); a Pichorides Distinguished Lecturer at the University of Crete in Heraklion (2017), and an Erskine Fellow at the University of Canterbury in New Zealand (1999). He was named an Honorary Professor of Mathematics at Zhejiang Normal University, China (1987); as well as receiving the Sigma Xi Outstanding Researcher Award, Univ. of South Fla. (1984), and the Distinguished Scholar Award, Univ. of South Fla. (1982).

Saff is co-Editor-in-chief and Managing Editor of the research journal Constructive Approximation. He also serves on the editorial boards of Computational Methods and Function Theory and Journal of Approximation Theory. He has mentored 18 Ph.D.âs as well as 11 post-docs. Saff is particularly active on the international scene, having served as an advisor and NATO collaborator to a French research team at INRIA Sophia-Antipolis; a co-director of an Australian Research Council Discovery Award; an annual visiting research collaborator at the University of Cyprus in Nicosia; and as an organizer of a sequence of international research conferences that helps foster the careers of mathematicians from developing countries.

He and his wife Loretta, who live in Nashville, have 3 daughters and 6 grandchildren.