Yesterday was one of the biggest shopping days of the year, with people lining up outside stores hours before they open in order to get the “best” deals. As someone who can only handle shopping in small doses, why people show up and camp out year after year in order to shop in massive crowds is unfathomable to me. Much of the hype may be due to ads like this one that paint Black Friday as a rare, unmissable opportunity to save money: 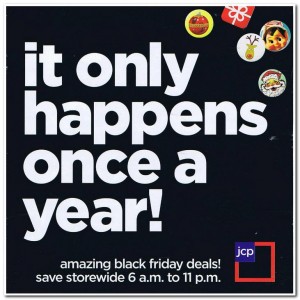 Naturally, stores see this shopping day as a way to capitalize and earn large profits and may use advertising to exaggerate opportunities for savings in order to attract larger crowds. However, the deals advertised by stores may not be wholly accurate. For instance, even though this ad claims that Black Friday “only happens once a year” (which is technically true), the deals offered may be no better than they are at any other times during the year. Some stores are even known to mark up their prices just before Black Friday and then lower them back to normal on the shopping holiday under the guise of “savings.” Moreover, stores often advertise “doorbuster” deals for products that are heavily marked down but available in very limited quantities (sometimes as little as 2 items), meaning that most shoppers will not have access to them. Additionally, many stores leave most of their stock un-discounted, but the massive shopping crowds are still drawn to browse through these items, often purchasing many things that they don’t need and aren’t on sale at all. While there may be some actual deals to be had on big ticket items on Black Friday, this is largely a shopping phenomenon to capitalize on shoppers and trick them into thinking they are saving money when they really aren’t.

This entry was posted in News. Bookmark the permalink.