The core science of KELT and the reason for the KELT project is to detect transiting planets around bright stars.   A transiting planet, if it is bright enough to allow Radial Velocity (RV) measurements of the planet’s orbit, allows a derivation of full orbital parameters through combination of transit and RV data, yielding the orbital inclination, eccentricity, and tight constraints on the planet mass. Measurement of the planet radius from the transit light curve, combined with the mass, provides the planet density, placing critical constraints on the planet composition and core mass. And observations of light from the planet itself via reflected starlight or thermal emission, as well as spectroscopy of starlight transmitted through the planet’s atmosphere, all become possible. 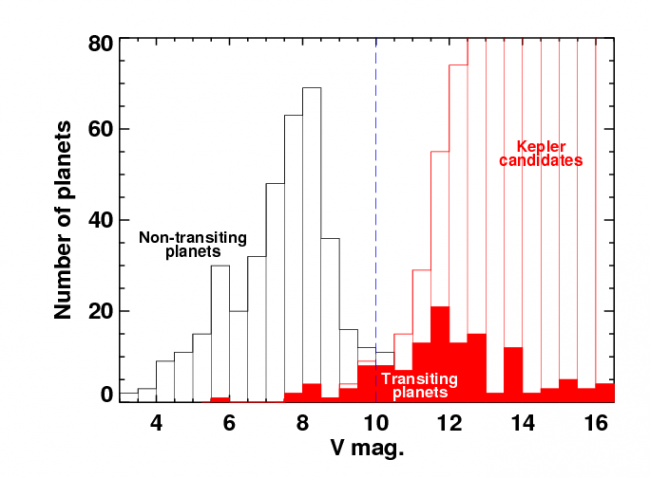 The few transiting planets brighter than V=10 are going to be the benchmark systems that astronomer will use over the next decade to understand the nature of exoplanets, and to understand their formation and evolution.

KELT is designed to discover more of these extremely valuable planets.  We have designed our telescopes to achieve maximum precision around V=8, and to maintain precision to better than 1% accuracy as faint as V=10.  Due to various optical and detector properties, our sensitivity to transiting planets can in certain cases reach as bright as V=7.5 and as faint as V=11.

The brightness range of 8 < V < 10 is a special one.  RV surveys are able to probe all the brightest stars on the sky for the kinds of planets that KELT can find.  However, because there are so many more faint stars than bright ones, the large time investment that the RV technique requires means that it is not possible to survey all stars at V=8 and fainter.   That is where transit surveys become more useful.  It is also the brightness range where there should still be some undiscovered transiting giant planets, and where the optics of KELT allow us to survey a large fraction of all those stars on the sky.

The Kinds of Planets KELT-South Can Find

Because of the way a ground-based transit survey operates, KELT is looking for transiting hot Jupiters, by which we mean planets in orbital periods of less than 10 days, and masses larger than about half the size of Jupiter.  These planets are intrinsically rare, only about 0.5% of dwarfs have hot Jupiters.  Furthermore, we will only be able to detect those where the orbital plane of the planet is inclined just right to create a transit along our line of sight.  Assuming that exoplanet orbits are oriented randomly, the probably of a hot Jupiter transiting is about 10%.  Finally, in order for us to make a detection, we actually have to see the host star experiencing the transit.  Since we cannot observe 24 hours a day, we naturally miss a lot of transits events.  Both the probability of a favorable orientation, and the chance that we will actually observe a transit when it occurs, drop dramatically the longer the orbital period is.  That is why we cannot find planets in orbits much longer than 10 days.

What about smaller planets in short-period orbits?  It turns out that the size of a transit signal drops proportionately to the square of the planet’s radius.