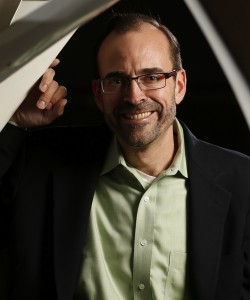 Douglas Adams was appointed Distinguished Professor and Chair of the Department of Civil and Environmental Engineering July 1, 2013. He is the director of the new Laboratory for Systems Integrity and Reliability at Vanderbilt,Â which uses multi-modal sensing and analytic techniques to illuminate the complex ways in which materials and machines degrade. Â The goal of this research is to safeguard human lives while controlling the lifecycle cost and reliability of infrastructure that the nation relies on for its energy, security, and transportation needs. Previously he was the Kenninger Professor of Renewable Energy and Power Systems in the School of Mechanical Engineering at Purdue University, where he also served as founding Director of the Purdue Center for Systems Integrity.

He has published 72 archival journal papers, 164 conference papers, several book chapters, and a textbook on structural health monitoring, and he has graduated 14 Ph.D. and 29 M.S. students. His work has generated 13 patents, and he is actively implementing this technology with industry to more effectively manage system reliability while reducing the operation & maintenance costs of defense and energy systems.Â Adams has secured 93 federal and industrial contracts/grants for $29M in funding.

He has received the Presidential Early Career Award for Scientists and Engineers, the DiMichele Award from the Society for Experimental Mechanics, and a U.S. Army Technical Medal of Achievement.Â  He is winner of the Purdue University Murphy Award for excellence in teaching and his name is recorded in the Purdue Book of Great Teachers.Â  He was named a Fellow of ASME in 2011 and is Managing Editor of Structural Health Monitoring.