“…a fascinating, important source of information for historians and theorists, students and teachers, general audiences, and specialists.” — Journal of the IAWM, 2011

“…offers a rare glimpse into the styles and attitudes of gifted women and their work.” — Pan Pipes, 2011 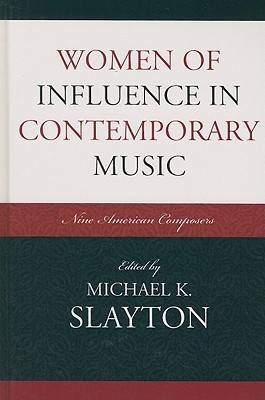 While these composers have much in common, not least of all dedication to their art, their individual stories reveal different impulses in American music. Their works reflect the shifting societal landscapes in the United States over the last seven decades, as well as different stylistic approaches to writing music.
Each chapter includes a biography of the composer, an interview, and a detailed analysis of one major composition. The composers openly reflect on their individual journeys, in which they have discovered respective musical languages and have found success during different times in history.

â…an admirable and impressive diversity of experience and approach, of perseverance and serendipity, of innovation and inspired musical juxtapositions.â — Notes, March 2012

To read the foreward, entitled “Who Are These Women?,” by distinguished musicologist and author of Women and Music: A History, 2d Ed. and Women in Music: A Research and Information Guide, 2d Ed. Karin Pendle, click here.

Slayton wrote the article, “Composer in Waiting” for Scope Magazine’s Winter 2011 issue. The article serves as a companion piece to his chapter on Elizabeth R. Austin in Women of Influence in Contemporary Music: Nine American Composers.

“Composition feminine.”Journal of the International Alliance for Women in Music

“Elizabeth R. Austin: An Interview with the Composer.” Journal of the International Alliance for Women in Music