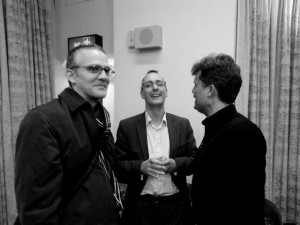 Slayton is co-director of “Collaborative Composition in London,” an ongoing international exchange program between the Royal Academy of Music in London and the Blair School of Music. The program’s visionary founders, acclaimed composerÂ Michael Alec Rose andÂ juggernaut violinist Peter Sheppard Skaerved, serve asÂ its directors, with wonderfully imaginativeÂ composer David Gorton co-directing from the London side.Â The 2012 exchange welcomed the inclusion of contemporary oboe specialist Christopher Redgate. Established in 2006, “Collaborative Composition in London” occurs in the spring semester of every other year. Four students from the Blair School and four students from the Royal Academy are brought together for two weeks–one week in Nashville and one week in London–with the “express purpose of having absolutely no purpose,” as Sheppard Skaerved is fond of putting it. The students, typically two composer-performers and six performer-composers, spend the time in intense sessions of creative exploration and experimentation, expertly guided by Sheppard Skaerved and Rose. Slayton and Gorton also lead various sessions for the students,Â as well asÂ taking the opportunity to trade their respective classrooms during the exchange. The end result of all of this is most often an informal concert, open to the public, featuring the collaborative efforts of all involved.

Slayton was commissioned by Blackbird Theater Artistic Director Wes Driver and Managing Director Greg Greene to compose the score for their epic original musical, Myth. The work was staged and premiered in the summer of 2015.