Syriaca.org editors will be giving a live demo session of the project in conjunction with the 2015 North American Syriac Symposium held June 21-24, 2015 at The Catholic University of America in Washington, D.C. Details are hereÂ  and here. The demo will occur on Monday June 22 at 7:30 P.M., David A. Michelson, Jeanne-Nicole Mellon...... KEEP READING

A discussion on the important role of librarians in collaboration on Syriaca.org was part of a presentation given by Vanderbilt University library staff as part of “Mining the Information Landscape” the 2015 annual meeting of the American Theological Library Association held June 17-20, 2015 in Denver Colorado. The presentation, “Doing Digital Humanities in Theological Libraries,”...... KEEP READING

On 3/31/15, Syriaca.org general editor David Michelson gave a presentation, âNineveh No More: Cultural Genocide in Contemporary Iraq and Syria,â as part of the Spring Faculty Assembly at Vanderbilt University. The presentation focused on the current cultural and political crises in Iraq and discussed the cultural preservation work of Syriaca.org. A press release from Vanderbilt...... KEEP READING

Posted on Wednesday, May 6th, 2015 in Uncategorized | Comments Off on 3/31/15 Presentation: âNineveh No More: Cultural Genocide in Contemporary Iraq and Syria.â

Syriaca.org is pleased to announce that it has received funding from the National Endowment of the Humanities under the Humanities Collections and Reference Resources program. The award to be directed by Daniel Schwartz (Texas A&M University) will be used to develop three new resources: 1. an open-source data curation and editorial module which will allow...... KEEP READING

3/26/15 Presentation “Syriaca.org: Preserving the Lost History of Christianity in Syria and Iraq”

Syriaca.org general editor David Michelson will present on the research of Syriaca.org in a guest lecture at Texas A&M University, hosted by the Department of History and the Initiative for Digital Humanities, Media, and Culture. The lecture will be held onÂ March 26, 2015 at 2:00 p.m. in 311 Glasscock and is free and open to...... KEEP READING

Posted on Friday, March 20th, 2015 in Uncategorized | Comments Off on 3/26/15 Presentation “Syriaca.org: Preserving the Lost History of Christianity in Syria and Iraq” 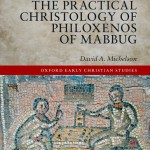 The Practical Christology of Philoxenos of Mabbug

Posted on Thursday, February 26th, 2015 in News, Publications | Comments Off on The Practical Christology of Philoxenos of Mabbug

Posted on Thursday, February 26th, 2015 in events | Comments Off on Mar. 27, 2015 Kate Cooper on âVirgins, Mothers, and Martyrs: Women in Early Christian Africaâ

In conjunction with Hugoye Symposium IV, Syriaca.org will be holding a one day workshop for interested collaborators on 3/7/15 at Rutgers University. The workshop will introduce the linked open data sets and open-source software created by Syriaca,org and demonstrate how it can be re-used for related projects. The workshop will also include an opportunity for...... KEEP READING

Posted on Thursday, February 26th, 2015 in Uncategorized | Comments Off on 3/7/15 Syriaca.org Introductory Workshop

Syriaca.org is pleased to be a co-sponsor of Hugoye Symposium IV: Syriac and the Digital Humanities which will be held on 3/6/15 at Rutgers University. The symposium will feature thirteen presentations by scholars working in varied aspects of Syriac studies including corpus linguistics, digital libraries, manuscript cataloging, and prosopographical research. An online program is here:...... KEEP READING

Posted on Thursday, February 26th, 2015 in Uncategorized | Comments Off on 3/6/15 Hugoye Symposium IV: Syriac and the Digital Humanities

Feb. 24, 2015: Jeanne-Nicole Mellon Saint-Laurent on Missionary Stories and the Formation of the Syriac Churches

The Warren Center Late Antiquity Seminar will meet on Tuesday, Feb 24, 12:10-1:30 pm, at the Warren Center. Lunch will be provided. We will be have the opportunity to meet with Prof. Jeanne-Nicole Mellon Saint-Laurent, Assistant Professor of Theology, Marquette University, who will discuss “Hagiographical Portraits of Jacob Baradaeus,â a chapter from her forthcoming book...... KEEP READING

Posted on Tuesday, February 17th, 2015 in events | Comments Off on Feb. 24, 2015: Jeanne-Nicole Mellon Saint-Laurent on Missionary Stories and the Formation of the Syriac Churches

Syriaca.org editor David Michelson will present to an informational session on on TEI for Manuscripts at Vanderbilt University on 2/2/2015. These are the links for that presentation XML: http://dh.obdurodon.org/what-is-xml.xhtml Gentle Introduction that shows TEI in use: http://uvatango.wordpress.com/class-materials/tei-handout-poetry-edition/ Simple and sample exercise for using TEI for manuscripts: http://tei.oucs.ox.ac.uk/Talks/2009-04-galway/exercise-D2_describing-a-manuscript.xml   Examples: http://wwwb.library.vanderbilt.edu/manuscripts/index.html Sample Entry: https://github.com/srophe/manuscripts/blob/master/747.xml Sample file:...... KEEP READING

Posted on Monday, February 2nd, 2015 in Uncategorized | Comments Off on 2/2/15 Introductory Session on TEI for Manuscripts @Vanderbilt University

1/4/15 Syriaca.org Editors Present at the American Historical Association: âThe Digital Humanities and the Study of Christianity in Late Antiquityâ

On January 4, 2015 Syriaca.org editors Jeanne-Nicole Mellon Saint-Laurent, David Michelson and Daniel Schwartz along with Syriaca.org research assistant James Walters participated in a panel on “The Digital Humanities and the Study of Christianity in Late Antiquity: Reflections on a Disciplinary Intersection” at the 129th Annual Meeting of the American Historical Association. The panel was...... KEEP READING

Posted on Sunday, January 4th, 2015 in Uncategorized | Comments Off on 1/4/15 Syriaca.org Editors Present at the American Historical Association: âThe Digital Humanities and the Study of Christianity in Late Antiquityâ

11/24/14 AAR/SBL Panel on âEastern Christian Spirituality: Perspectives on Ecology, Nature, the Body, and States of the Soulâ

Syriaca.org editor David Michelson will present a paper on 11/24/14 at the American Academy of Religion meeting in San Diego, California. The title of the paper is “The Syriac Gazetteer (www.syriaca.org/geo): A New Reference Work for the Geographic Environment of Middle Eastern Christianity”. For those following the talk live, here is a list of the...... KEEP READING

Posted on Tuesday, November 11th, 2014 in public presentations, Syriac Gazetteer | Comments Off on 11/24/14 AAR/SBL Panel on âEastern Christian Spirituality: Perspectives on Ecology, Nature, the Body, and States of the Soulâ

Syriaca.org editors Jeanne-Nicole Mellon Saint-Laurent and David Michelson will present at the Society of Biblical Literature in San Diego, California onÂ 11/23/14 as part of the panel “Digital Humanities in Biblical, Early Jewish, and Christian Studies” Their talk will be entitledÂ “Using Linked Open Data to Explore Manuscript Collections: A Case Study from Syriaca.org”. For those following...... KEEP READING

The official magazine of the National Endowment for the Humanities has a short article on The Syriac Gazetteer in itsÂ “Curio” section. The author, Steve Moyer, notes: “These days, most speakers of Syriac come from Syria and Iraq, two countries which are wracked by civil war and from which many Syriac speakers are fleeing. An NEH-funded...... KEEP READING