Because SoTL is multidisciplinary, it embraces and even values a range of methodologies. This “methodological pluralism” (Huber & Morreale, 2002) is seen in the variety in types of data recognized as evidence of student learning and then again in the methods of analyzing this data.

Historically, there has been a greater reliance on quantitative analyses, which excel at determining how much or how many; employing structured designs for the purpose of predicting, confirming, hypothesis-testing, and deducing; and striving for precise, representative results (Meyers, 2006).  Examples include counts, Likert-scale surveys, and content analyses of texts (e.g., the frequency with which a specific word or pattern appears).

Biologist and SoTL scholar Craig Nelson actively encourages the use of qualitative instruments and analyses “to help counter the tendency in some circles to attempt to apply to SoTL the models of research that recognize only quantitative studies” (p. 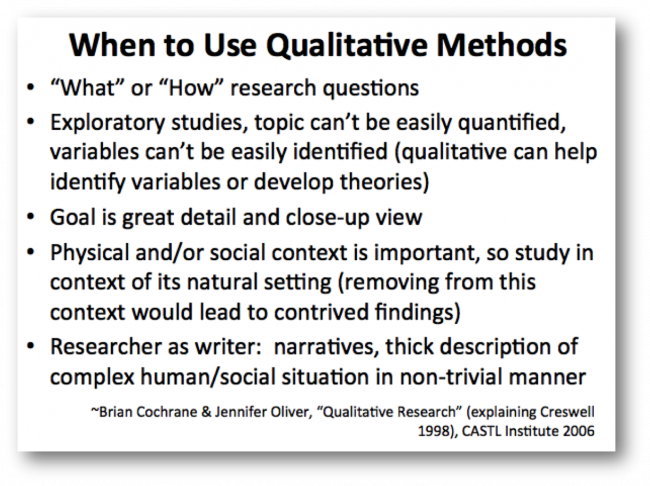 90). Complementing the quantitative, qualitative approaches are most useful for analyzing the quality, nature, or essence of what’s being studied; developing flexible or evolving designs with frequently nonrandom samples to understand, describe, and inductively reveal meaning; and richly descriptive results (Meyers, 2006).  Cochrane and Oliver’s (2006) list in the box above further explains when qualitative methods are most appropriate.

William M. K. Trochim of the Research Methods Knowledge Base (2006) reminds us that  “All quantitative data is based upon qualitative judgments; and all qualitative data can be described and manipulated numerically.” (emphasis in original; “Types of Data”).

To be clear, one is not better than the other.  Each has different strengths and goals, so they should be used purposefully. That said, the multidisciplinarity of SoTL often means that the richest projects draw on this complementarity and integrate both methods to develop a fuller understanding of student learning.

For guidance on this stage of a SoTL project, see
“Analyzing the Evidence: What It Reveals about Student Learning.”