Posted by ssmvaquariumblog on Friday, August 31, 2018 in News.

Â  Â Â  First of all, the SSMV Aquarium Blog team would like to apologize for the lack of content in the winter and spring months. We hope to post more regularly on the growth of our aquarium.
Â Â  There have been many new additions to our aquarium, including new fish, crustaceans, and other sea creatures. In early March, the aquarium became home to many new species of creatures, and since then, the following are now established members of our reef tank:
Some of these fish, such as four of the C. viridis, did not adapt well to the aquarium environment and although given a high level of care, died due to unknown causes. The other fish and corals, however, continued to thrive in their new habitat and different interactions formed between fishes, such as a schooling relationship amongst the chromis and a mutual relationship between the Tail-spot wrasse and the Yellow Tang. This was further observed through multiple SSMV Semester Projects, as seen below. 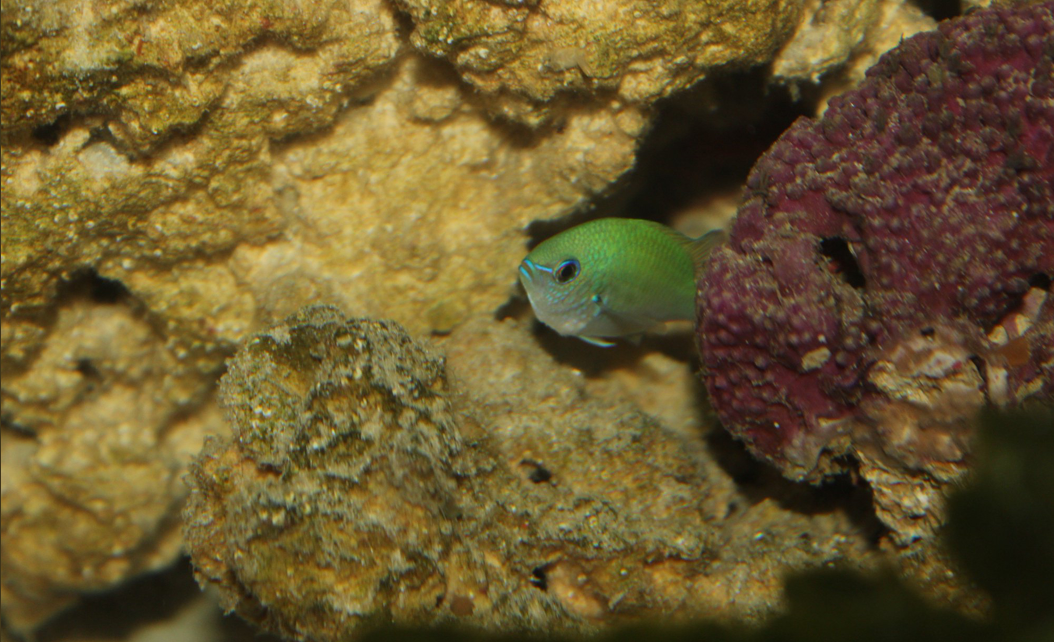 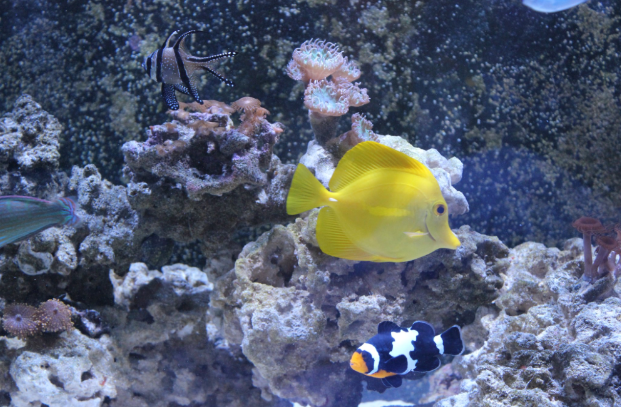 Some new and familiar faces featured in the main aquarium tank.
Â  Â Â  Due to a specific semester project focusing on Camposcia retusa, a crab (named âLucyâ) was also introduced to the aquarium in mid-May. 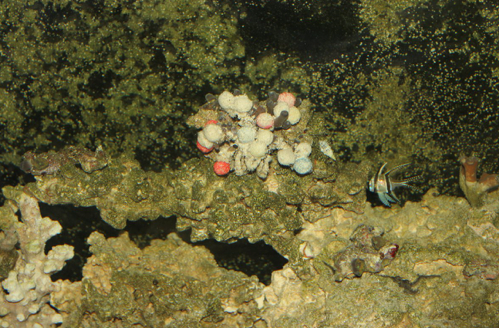 Â Decorator crab, Lucy, thriving in her new home in the main aquarium tank. And yes, this is really a crab!
Â  Â Â  Then, in July, a 55-gallon tank was converted into a jellyfish tank for upside-down jellyfish (Cassiopea sp.). These jellyfish cool because like some corals, they contain algae which make food for them. We are collaborating with the Tennessee Aquarium to make this a reality, and hoping to start some fresh fundraising efforts to ensure we have a consistent supply of food (brine shrimp, which we will hatch from cysts) and necessary additives for the jellyfish to remain healthy. To prepare for their arrival, a select group of students has painted the tank frames. Students also helped re-seal the tank, which we received with some leaks. This required the removal of all the silicone, and application of new silicone, ensuring that all seams were covered. We will give more updates on the jellyfish tank in our next blog post.

55-gallon tank that will host jellyfish painted by students. 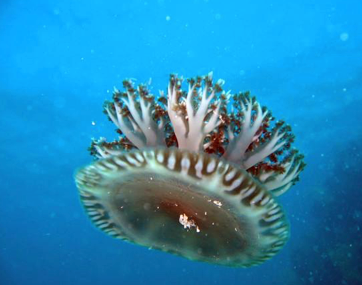 An example of the jellyfish that the Classroom Aquarium will be hosting [1].
Â  Â Â  Among other news in the aquarium, our clownfish have developed a symbiotic relationship with our green star polyps coral. This can be noticed when our female clownfish is seen swimming and inhabiting the coral. In the wild, clownfish will normally inhabit sea anemones to use as protection, shelter, and a place for breeding and laying eggs. In return, the anemone (or in this case coral) will receive food and a removal of its waste. Since our coral is similar to an anemone, our clownfish have chosen to form a symbiosis with the coral that mimics its relationship with the anemone in the wild. Students had previously noticed these interactions with our Pink Dust Zoanthid coral and were excited and pleased to see the fish repeat these interactions with a different coral. 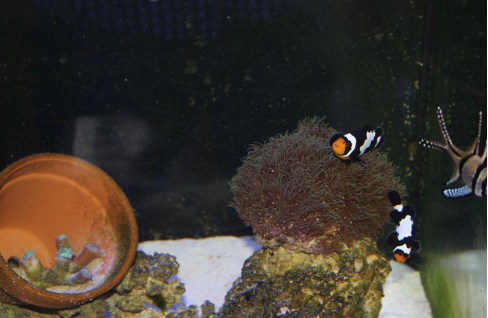 The female clownfish swimming through the coral while the male watches. More photos can be viewed on the SSMV Classroom Aquarium Facebook page.
Freshman spring semester projects
Â Â Â Â  Another event that has been happening involving the SSMV Aquarium was the Spring Semester Projects. The freshmen, as well as one sophomore group, conducted aquarium related projects.
Lucy the Crab (A Decorator Crab)
Decorator crabs are a subgroup of crabs characterized by their unique ability to âdecorateâ or cover themselves with materials from their environment. Decorator crabs have been shown to decorate for many different reasons, including using it as a hunting strategy or for camouflage. Our study examined why a specific species of decorator crab, the Camposcia retusa, decorates itself. The crab was presented with materials and shelters of varying colors, and its decoration patterns were observed. Data were collected on the location of the crab within its tank, and what colors she was using for decoration. After the data was analyzed, it was concluded that the C. retusa decorates using masquerade camouflage techniques.
Wrasse/Tang Interactions
This study focused on how two fish who share a natural habitat in Southeast Asia can also form a relationship in captivity. The two fish, the H. melanurus and the Z. flavescens were the subjects of the study. The variable that determined whether or not the two had a relationship was the distance between the two. Footage of the tank was taken using the camera and then analyzed. It was then compared to the distance between the Z. flavescens and the clownfish, A. ocellaris. An analysis led to a conclusion supporting the existence of any relationship.Â  After analysis, it was concluded that the tang tended to be closer to the wrasse than the clownfish, suggesting a relationship. This is important because it helps illustrate whether or not two fish of different species that have no known benefit to each other can form a relationship similar to friendship.
Tropical Fish Interactions with Pink Dust Zoanthid Coral (Genus Zoanthus)
This project studied, monitored, and classified interactions between the Pink Dust Zoanthid Coral (also known as Pink Rose Paly) and four species of fish found in the Aquarium. In order to monitor the fishes observed, students utilized a camera system in place that allowed up to 10 hours of video playback footage. After collecting data, students ran multiple statistics tests (one being ANOVA) and found that there were large statistical differences amongst the fishes. Furthermore, the study found that the H. melanurus had the highest average number of interactions with the coral (such as pecking and swimming through the coral) than the C. viridis fish did, which had the lowest average number of interactions. Possible reasons were explored through further research. This builds on and expands the scientific communityâs knowledge of mild toxic emitting corals and the relationships that they maintain with fishes by providing insight into the behaviors present in the fishes when interacting with the coral. It also demonstrates the different types of interactions fishes have with the coral and can be applied to research centering on highly toxic corals, such as palythoas and other genera.
Amphipods
Another freshman group investigated the behavior of amphipods, a type of crustacean. Amphipods are important to study as they serve as indicators for climate change and oil spills, along with being indicator species in certain communities. This project focused on aggression amongst amphipods whilst feeding and if food type and/or amount affected aggression in any way. There were two food types and three food amounts.Â  An experimental chamber was created and trials were conducted in 5-minute increments. With data analysis and the experiments completed, it was found that food type and the amount did not affect amphipod aggression.
Clownfish Behavior
Finally, students analyzed the behavior of our two black snowflake Amphiprion ocellaris clownfish. Because the tank hosted one male and one female clownfish, students decided to study the aggressiveness of gender on clownfish behavior. They observed the clownfish through utilizing a security camera located on the side of the aquarium tank, noted, and categorized their behavior on two scales based on researched mating behavior. After observing the behavior in levels of aggressiveness from male to female and from female to other, the data were analyzed with ANOVA. The study found that results were not conclusive as more research is needed. Understanding the aggression and interactions between the clownfish allows students to further understand the interactions of fishes and other sea creatures in ocean environments.
Â  Â Â  Through these projects, students learned more about not only their topic of research but how the animals and relationships observed through their projects play large roles in maintaining a healthy ecosystem and ocean life. It was
Â  Â Â  Lastly, anyone can access live camera footage of the main aquarium tank here:
http://www.jordangrigor.com/ssmv-aqua-cams-live-streaming/
Â  Â Â  As always, we thank you for taking the time to read our blog. We hope to be posting more in the future!
Thanks for reading our blog:
SSMV Students
Feel Free to contact us at:
classroomaquariumblog1@gmail.com
Resources:
[1] V. Melhaff, Upside Down Jellyfish, 2013.