How Do You Prepare for a Catastrophe ?

In 2008 my family in northwestern Ohio was having to deal with a sudden, unexpected problem.  Most of the large trees in my father-in-law’s front yard were white ash trees and they were all dying, killed by the emerald ash borer (EAB).

In order to prevent the dead trees from falling onto his home, he had to spend hundreds of dollars to have them removed by a tree service.  When a neighbor tried to cut down a dead ash tree by himself, the tree fell on his house, causing significant structural damage.

A couple years later, my family was walking through the woods on my dad’s farm.  We were admiring the large oaks that had miraculously avoided being logged during the previous century.  But the largest trees, all ashes, were dead.  Some of those trees were so large that it took several of us to reach all the way around them.  It really broke my heart to see these dead giants, all destroyed by a tiny beetle that hitchhiked its way from Asia to Detroit in a packing crate.  I wished that there were some way that I could have gone back in time to do something to prevent their deaths, but I couldn’t.  They were gone.

The arrival of the EAB in an area is a catastrophe.  But unlike most catastrophes, it is totally predictable. The emerald ash borer has been expanding its range throughout the eastern U.S. and Canada at a steady pace and there is currently no way to stop it.  All attempts at quarantine or creating “firebreaks” have failed.  The only real question is when the EAB will arrive in an area.  It’s like a giant steamroller slowly rolling down a hill towards your house.  You can see that it’s coming and you know that when it gets there, it’s going to smash your house.  But there’s nothing you can do to stop it.

So far this story has been pretty gloomy.  The one bright spot is that individual ash trees can usually be saved as long as they are treated with insecticides BEFORE they are heavily infested with the EAB.  “Before” is the key word.  If you wait until after the tree shows signs of infestation, it’s too late.  By the time you see the damage, the tree’s chances of survival are very low.

After being depressed about the loss of ash trees in the area where I grew up, I resolved to try to do something proactive in Nashville before the EAB got there.  The Vanderbil GIS database reported that there were 182 ash trees in the arboretum: 51 white ashes (Fraxinus americana) and 131 green ashes (F. pensylvanica).  Both of these species are highly susceptible to EAB and their mortality rate when infested is near 100%.  Blue ash (F. quadrangulata) is another common ash species in the Nashville area that has a somewhat better survival rate, but there are none planted in the arboretum.  Although the tree layer of the GIS database was pretty good, in some cases it was out of date and listed trees were no longer present.  There was also very limited information about the size and condition of the trees.  So, last year (spring 2014) I had my Introduction to Biological Sciences Lab class conduct a project to inventory the ash trees in the Vanderbilt Arboretum to provide information that could help the University plan for the impending arrival of the EAB.

Each pair of students in my class was given the GPS coordinates of one of the trees on campus, a meter stick, and some string.  They put the coordinates into the map app of their smart phone and used it to find the location of their tree.  After locating their tree, they used the string and meter stick to measure the circumference of the tree, and photographed the tree using the camera on their phone.  Click here to see the photos.

In most cases, the students were able to find and measure their tree.  In some cases, the tree was missing and the students recorded that fact.  By examining the photos, it was possible to tell that some trees were in pretty bad condition.  Photos showed that other trees were in good condition, but were in pretty bad locations, e.g. crammed next to garbage cans between two fraternity houses.  In the end, we were able to verify and measure 128 ash trees on campus, including the largest ash tree in the arboretum with a diameter of 111 cm (44 inches).

Several weeks after students had collected all of the data, their assignment was to use GIS software to create maps showing the size, location, and species of all of the ash trees on campus.  The students were also assigned to attempt to predict when the EAB would arrive in Nashville using the speed of invasion listed in the literature and the distance of the nearest EAB infestation to Nashville.  After completing their analysis, the students wrote a report summarizing their findings, addressed to the arboretum director.

So what did the students conclude?  The arboretum has a number of fine specimens of white ash in secure locations on campus where they are not likely to be disturbed by construction or utility work.  The situation was not so good for green ash.  Many of the green ash trees are small and planted along streets.  Some of the large green ash trees that are in better locations are in poor condition, while others are in good condition but in bad locations.  Nevertheless, there are several green ash trees that are both in a good location and in good condition.  Based on the data available at the time, most students concluded that the emerald ash borer would arrive at Vanderbilt in 2016 or 2017.  I selected several of the best reports to actually give to the arboretum director, Robert Waits.

Unfortunately, someone apparently carried infested wood into Davidson County, because in September 2014 the EAB was detected in the Old Hickory area near Nashville.  That made our project, and the data we collected all the more timely, since there would be much less time than expected to decide how to respond to the impending crisis.  The current plan is to carry out the insecticide treatments on some of the trees on campus during the late spring or early summer of this year (2015).  These treatments will probably have to be repeated every year for the indefinite future, until a biological control of emerald ash borer is discovered and implemented. 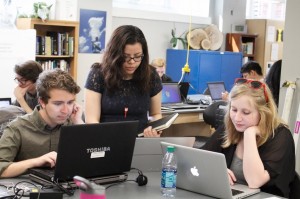 I’m currently working with three seniors from the School for Science and Math at Vanderbilt to collect some additional data in preparation for the invasion of the EAB.  When the ash trees start to bloom in a few weeks, Valeria, Daniel, and Eliza will be checking to determine the gender of the high-priority ash trees.  Unlike most trees that are both male and female, ash trees are dioecious, meaning that individual trees are either male or female.  Having this information would make it possible to ensure that the treated trees on campus are a mix of male and female trees.  The students are also going to construct EAB traps to monitor the levels of beetles over time.  You can read more about their work in a previous blog post. 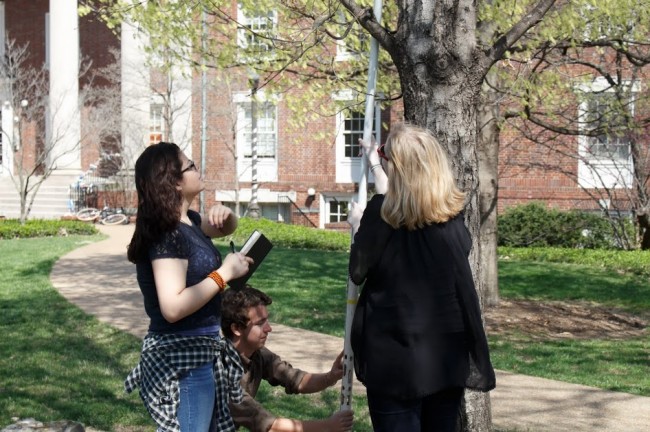 Ultimately, I don’t know how successful any of these efforts will be at saving ash trees in Nashville.  Hopefully, it will at least make a few people aware of the serious problem of introduced pests.  And I will feel better about trying to do something about the impending catastrophe before it was too late!

Steve Baskauf is the communications coordinator of the Vanderbilt Arboretum and a senior lecturer in the Biological Sciences Department at Vanderbilt University. He can be contacted at steve.baskauf@vanderbilt.edu.