Posted by Michelle Bukowski on Wednesday, September 25, 2013 in Feature.

HSP (Hispanic Summer Program) is an annual, ecumenical, itinerant program, where a few of the extant Latin@ faculty in theology & religion come to teach one course each, so that graduate students from all over the country can come and study under one from several Latin@ faculty – more often than not for the first, and maybe the only time in their lives – while enjoying fellowship with one another for two intensive weeks in the summer. 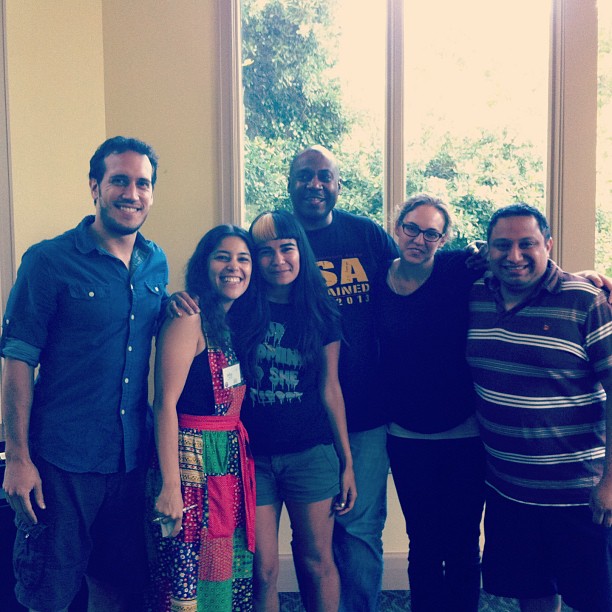 From June 22 until July 5, I participated in the Hispanic Summer Program in San Antonio, Texas. Vanderbilt University Divinity School is one of the fifty-three institutions that sponsor this program which emphasizes Hispanic theological perspectives. The goal of the program is to bring Hispanic theological education to Hispanics by Hispanics. As an immigrant, I was able to experience, for once, being the majority, and I was among a group of peers who were bilingual, multicultural, and Latin@s.

The course, Immigration, Mission, and Reconciliation, was taught by Profesora Alicia Marill. My expectation for the class was that I would talk to other immigrants and continue to learn about my community through different lenses; however, the class turned into more than I had expected. I had the opportunity to learn and discuss the missions and missionaries in what most people in San Antonio call “occupied territory”—a commentary on the “outsider” identity that Mexican-Americans bear despite an ancestral connection to San Antonio that surpasses the Mexican-American War. Our location, therefore, enriched our conversations concerning the mission-missionaries dialogue. We were able to experience fully that perspective when we visited the San Antonio Missions established by the Franciscans in the 1700s to convert the indigenous communities.

As part of the Hispanic Summer Program, I also was invited to plan an event. After viewing the first episode of Devious Maids, a show with an all-Latina cast playing maids, I thought it was crucial that we deconstruct the show because of the significant number of Latinas present in one space. The fishbowl conversation with our Latina faculty and Latina student body will go down as one of the most memorable events of my life because I was able to hear Latinas who passionately reject stereotypes that oppress us and reduce us to sexualized bodies.

As a first-generation college graduate and the first in my family to enroll in graduate school, I do not have a vast network of friends, especially in my field, in whom I may confide—specifically people who know what it is like to be in divinity school as a Latin@. After my experience at the Hispanic Summer Program, I now have a large community from within the USA that I call family. I met Latin@s who were forming their schools’ first Latin@ clubs, and I gained insight on how to further the Latin@ experience at Vanderbilt Divinity School.