Posted by Michelle Bukowski on Sunday, January 17, 2016 in Read This Book. 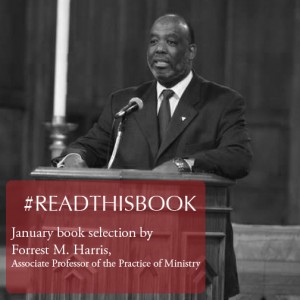 Each month, we ask a member of the Vanderbilt Divinity School faculty to recommend a book they are currently reading. Our January recommendation is offered by Forrest Harris, Associate Professor of the Practice of Ministry and Director of the Kelly Miller Smith Institute on the African-American Church.

Stand Your Ground: Black Bodies and the Justice of God

Kelly Brown Douglas has written a very timely and compelling book addressing the religious and racial myths underlying a “Stand Your Ground” culture which has been since 2008 a prominent feature in court proceedings and legal justification of the police killings of young unarmed black citizens.  Stand Your Ground: Black Bodies and the Justice of God dramatizes the intense passion of a black womanist scholar/mother and that of urban black parents whose children are rendered vulnerable and at risk in a culture of organized and legalized police gun violence.  Kelly Brown Douglass unpacks the dangerous elements of the question raised by President Obama in response to the killing of an unarmed black teenager, Trayvon Martin, and the legal sanctioning and acquittal of the white neighborhood security officer who killed him. “If Trayvon was of age and armed, could he have stood his ground on that sidewalk?”

A striking feature of the interpretative lens Brown deploys in her analysis dramatizes why as an African American Black church scholar and theologian, I could not read this book without painful tears.  Brown contextualizes American racial history and the perpetual bridge black bodies continue to cross as “guilty chattel” that demands a reckoning with the pain of why black bodies are criminalized and deemed a threat to the “cherished property” and social spaces of white exceptionalism. Brown’s narrative of America’s continuing dilemma and consciousness of race is unquestionably a serious theological account of why black bodies are susceptible to white violence in America.  Brown states “what happened to Trayvon Martin on February 26, 2012, is a result of America’s narrative of Anglo-Saxon exceptionalism.” Drawing from the keen insights of womanist compassion and care for black life, Douglas traces the Anglo-Saxon myth of “racial purity” and “hyper valuation” of whiteness and the denigration of blackness” to the grave of Trayvon Martin. Having brought the reader to the ground where Trayvon Martin stood on the eventful night of his death, Brown forges theology of hope in the midst of the perverse and tragic paradoxes of black life. “What is the meaning of the Justice of God for Black bodies in a Stand Your Ground culture?  Is or is not such a culture an affront to God?  Avoiding the trappings of the wordy discipline of theology, Kelly Brown Douglass anchors and posits her response in the existential struggles and emergence of “black faith” midst death and suffering from slavery to the present moment. Brown leaves us with hope. “The movement of God in human history” for black faith demands more than doctrinal affirmations void of justice but liberating faith to negotiate the contraction between black life and black hope.